Making Gay History wasn’t meant to be a podcast.

In 1988, Eric Marcus left his job at CBS Morning News soon after he was commissioned to write an oral history book about what was then typically referred to as the gay and lesbian civil rights movement. He gathered over 100 interviews that featured the perspectives of gamechangers like Abigail Van Buren (AKA Dear Abby) and Ellen DeGeneres. Even then, it seems he had some inkling that the information he’d collected would be treasured by the LGBTQ community decades later.

“I was hyper aware that some of the people I was interviewing were very old. They were involved at the very start of the movement and might not be around much longer,” Marcus recalled. “A number of the men had AIDS, and I knew they didn’t have much time. I must’ve realized to some degree that one day, these interviews would have value for someone.”

The first edition of Eric’s book was published in 1992 and the second in 2002. That’s when he donated six-feet worth of cassette tape trays to the New York Public Library. It wasn’t until 2015 when he was taking stock of his assets that he decided the stories he had collected are the kind that can be shared through any creative medium. “I figured I might as well showcase them using broadcast-quality equipment,” he said.

And the Making Gay History podcast was born.

“The people I interviewed who started the movement, they faced such a hostile world—one in which you could lose your job if you were found out,” Marcus said. “What impressed me most were the people who had this conviction in the 1950s and 60s, or even the 1940s, that they were right, and the world was wrong. There was nothing wrong with them, and they were going to change the world. It’s mind-blowing and so inspiring that they imagined a world that could be different.”

One of the most poignant stories Marcus encountered was from Morty Manford, who was present at the Stonewall uprising in 1969 and helped found and became president of the Gay Activist Alliance the same year. At that time, he had just helped found one of the nation’s first gay campus groups while attending Columbia University. Manford made countless contributions to the movement, and Marcus interviewed him in 1989 for the first edition of his book.

Manford’s story is told in two parts on the podcast:

“Not long before he died of complications from AIDS, [Manford’s] mother told me that he’s afraid no one’s going to remember his contributions to the movement,” Marcus said. “I sent her Morty’s chapter of the book, so she could read it to him. I felt so happy that I was able to capture Morty’s story and find a way to get it out into the public realm. So many more thousands of people have since been inspired by what he did.”

The podcast was adapted into a theatre production called “Making Gay History: Before Stonewall” through NYU Steinhardt’s Educational Theatre program. The live performance featured 20 characters from the podcast, and the company completed 10 performances before COVID-19 closed everything down. 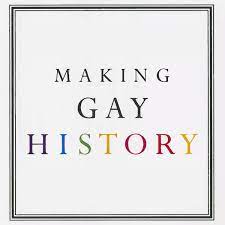 “What’s interesting to me is that young people today are very interested in the history whether they’re gay or not,” Marcus said. “For many of them, the LGBTQ civil rights movements was the civil rights movement of their time. We had a couple performances of the play held for middle and high school students, and I was moved watching their discussion. We had a Q&A after the show between the students and the director, and they had really good questions. They wrote to tell me how they now felt they had family, they had community, and they had ancestors.”

One of the stories in the play revolved around Bayard Rustin, who was one of Martin Luther King Jr’s mentors. He organized the 1963 March on Washington Movement with A. Philip Randolph.

“I asked the students for a show of hands if they’d studied the black civil rights movement,” Marcus said. “They all raised their hands. And then I asked, ‘How many of you had ever heard of Bayard Rustin before today?’ Not a single hand. The reason he isn’t taught is that he was kept very much in the background of the black civil rights movement because he was gay. Yet he was a principle architect of the movement.”

Marcus said that although there are many hidden histories of America, he’s hoping to recover and un-erase some of it for a new generation of students.

“I didn’t know I had a history until I started working on my book in 1988, and I felt I was robbed of it,” Marcus said. “I imagined what it would have been like for me to be a middle school student sitting in that audience, watching that show unfold, and hearing those stories… what it might have been like had I known I had ancestors. I shared that with the students. I said, ‘I can’t imagine how different my life would have been if I were sitting where you’re sitting now in 1973 when I was a middle school student… how transformative that would have been.’”

Marcus believes it’s his responsibility to share the stories he’s gathered over the years, and remarkably, he gets to do that in a way that allows people in over 200 countries to listen. The stories provide context for those who feel that we haven’t gotten far enough in the movement, and to see how far the movement has actually come and what people sacrificed to get to where we are today.

Strong Versus The Machine: Guess Who Wins

UTR: The History of Ireland