Many history podcasters are keen amateurs who have turned their pastime into a way of life. Yet despite being novices in the podcasting medium, Tom Holland and Dominic Sandbrook are well-regarded, popular, professional historians with hefty bibliographies and multiple appearances on TV and radio in the UK.

Tom is an expert in ancient times and has written about Persians, Greeks, and Romans as well as the histories of both Islam and Christianity, whereas Dominic is a contemporary historian and writes mostly about Britain post 1950s.

However, both admit to not having been plugged into podcasts and podcasting as a format before starting their own. In fact, the only podcast that Tom knew of was his brother’s—We Have Ways of Making You Talk. This is an immensely successful World War II podcast that James Holland, a prolific author on the war, presents with UK comedian Al Murray, well-known for his “Pub Landlord” act.

Watching his brother consistently rush off to record yet another episode, Tom began taking interest in the medium. Then, James’s production team approached Tom about hosting a podcast, possibly on the Ancient World. In discussion with the production company, though, they decided it would be more interesting to focus on the whole sweep of history rather than just Ancient History.

At that point, Dominic, with his knowledge of recent history, immediately became the obvious candidate for co-host. Though Dominic claims that “50 other people turned [Tom] down” before landing this show, Tom denies it. He points to Dominic’s reviews of history books for the Sunday Times newspaper, saying he “knows quite a bit about a lot, which seems to be what you need for podcasting.” 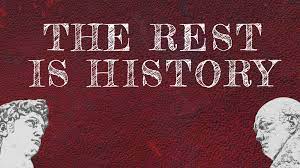 The pair has since discovered just what podcasts have that other formats, such as television or books, don’t:

“It’s freedom,” answers Dominic. Tom agrees, explaining how even while planning the podcast, they realized how liberating the format could be.

Having both done a lot of radio, Dominic says there is something constricting about the medium. But with podcasts, says Tom, “You can follow your own whim and see what works.” Dominic adds, “You don’t have someone looking over your shoulder.”

When they first started, the production company gave them ideas and even scripted some of the episodes. But they soon stepped back and let Tom and Dominic take the show the way it seemed to naturally gravitate.

As Tom puts it, “The lack of format became the format.”

It also allows them to approach history in different, fun ways. During the recent football (soccer) European Cup, they did a series of episodes discussing the history of the relationship between England and their various opponents, including Germany and Italy. There was obviously plenty to discuss. They also do occasional “10 Best…” episodes, which currently includes “The 10 Best Eunuchs in History” and the “The 10 Best Mistresses in History.”

To increase engagement and build relationships with their audience, production encouraged Tom and Dominic to get active on Twitter. This was no problem for Tom, as he has always been engaged on the platform. For Dominic, it was a different story—his social media activity is a result of the condition required to do the podcast. Both encourage audience interaction and will often include questions from “friends of the show,” though they reserve the right to ignore them if they so choose.

Thanks to social media, the connection they have with their audience provides them with real-time feedback on their show, as well. In fact, Tom says that the audience structures a lot of elements of the podcast—particularly, the running gags. They admit to acting up to their podcast personas, too, in which “Tom is the metropolitan fop, and I am the horny-handed man of the people. The listeners know that that is complete balderdash, but they enjoy the pretense.”

“When you start a podcast, by definition, you are screaming into a void,” says Dominic. So, connecting with their audience the way they have has been an unexpected bonus.

Though the podcast now takes up more time than they might have envisaged, they obviously both enjoy the experience of working together to create the show.

“Our sense of humor is quite similar,” says Dominic, yet there’s enough contrast to be entertaining, as well.

Contrary to many historians, Tom and Dominic are both happy to go out of their comfort zone. As Dominic puts it, “I don’t feel like we are the ‘Ancient guy’ and the ‘Modern guy.’ We are both completely happy to go way off our own terrain.” Tom agrees and cites the example of the episode they did on the French Revolution, a topic that is not from either of their eras, as being an exhilarating experience. “It was a good episode that could have been a calamitous episode.”

When it comes to their own topics, they like to take their time. Tom did a pair of episodes on Thermopylae and Salamis that didn’t reach Thermopylae until the second episode. So when they tackled Nixon, Dominic was determined to make sure that he got to Watergate in the first episode, which he just managed.

“When we do our own thing,” he said, “it is more stressful. There is so much knowledge to pack into an hour.”

They also break out of the format by having guests. They hope this means that they don’t end up boring the audience, but also, as Tom says, “There are subjects that we are not qualified to do.”

Tom talks of the privilege it is to be able to speak to people who are absolute experts in their fields, such as Marc Andreessen, inventor of the web browser, talking about Silicon Valley. It is a privilege for the listener, as well, to spend time with these two historians who are quite obviously having a great time talking about things they find fascinating.

The Curiosity of a Child