The word “podcast” was named “word of the year” by the New Oxford American Dictionary on December 3rd, 2005. At that time, there were more than 150,000 podcasts available on about any subject. . . and people thought it was the next big thing.

That year, Ricky Gervais took up podcasting, and within a couple months, he had exceeded 4.5 million downloads and made the Guinness Book of World Records.

It was forecast that podcasting would make radio irrelevant—that it would change the broadcasting landscape forever.

But in an article published in 2011 titled “Podcasts: Who Still Listens to Them?” author Alex Hudson intimates that podcasting had amounted to nothing since 2005 as the world moved on to social media. He quotes radio futurologist James Cridland as saying, “Half of podcasting is about just another medium to deliver the same content.”

Apparently, Kevin Stroud didn’t read this article, as he was set to embark on the biggest project of his career—a new podcast.

Back in high school, Kevin’s English teacher played a video of scholars reading Beowulf in its original Old English. For Kevin, it was hard to imagine how Old and Modern English were related at all. That concept intrigued him long after that day. In fact, it left him quite “firwetgeorn,” as they say in Old English.

And despite choosing to go to law school to become an “æsweotol,” delving into what made a language became his passion. So in 2011, when the BBC’s Alex Hudson was pondering the death of podcasting, Kevin was deep into the process of planning the perfect “History of English” podcast.

He’d broken the subject into four parts, figuring he could do 25 episodes each for a perfect and complete 100-episode chronicle on the history of English. His only real worry at the time was whether he could stretch the content to fit 25 episodes.

But then he did some research and got behind the mic, and the rush and joy of podcasting took over. Without any imposed limitation, he found he could go much deeper into a subject than his perfect-podcast idea presumed.

And now, the History of English Podcast is on episode 144, and he’s nowhere near the end of his original 100-episode podcast idea.

While History of English may sound like a grammar-based podcast, it’s really all history. In fact, the episodes are chronological in nature and tied to the cultural and political changes happening in the world at the time. 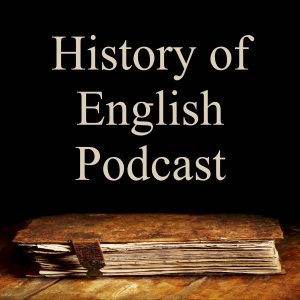 The episodes explore the herding culture of Indo-Europeans, the migration of those herds throughout Europe and Asia, and the beginnings of the alphabet all the way up to the emergence of Modern English.

Sometimes, the evolution of the language actually ties together and explains cultural changes. Kevin has been able to study the world’s history in 10-year and 20-year increments and pull out themes from each of those time periods. He uses those themes to then help explain the change in language.

Even today, we see that. The rise of social media and texting has created its own emoji and short-form language filled with “LOLs” and “BRBs.” It’s no different over the course of time; whether it be the printing press or the invention of radio, language adapts and changes.

Kevin actually finds himself defining language in the podcast. What is the difference between a dialect and a pidgin? When is a dialect that of a cultural distinction and when is it political?

One advantage a podcast has over a book, per se, is the listeners ability to hear a dialect or accent versus seeing it in print. Early on, Kevin concluded this would be a tremendous benefit, but also came to the realization that he couldn’t recreate all the necessary accents.

So, he did something extraordinary…

He created an audio database of accents from around the world.

Having created a website that offers sample sentences to help illustrate differences in accent, he asks his listeners with local or regional accents to go to his website and record themselves speaking.

One of the epiphanies he’s had from that part of the podcast is that many of the world’s local and regional accents have begun to erode. Popular culture, digital media, and our cultural proclivity to move from one place to the next has begun to homogenize English.

There’s no better source to learn about these things than Kevin’s History of English Podcast. If you’re a history buff who knows there is more to learn than what you already know, IMHO, I recommend adding this one to your player. TY.

Under The Radar: The Morbid Curiosity Podcast

UTR: The Past & The Curious