Time stands still for no industry.

Sharon and her husband Fred learned this firsthand. They grew up in the time of VHS, CD, and DVD, and in so doing, had carved out a place in this world where they could make a living telling the stories they wanted people to hear.

They were independent filmmakers. And then, the world changed.

In 2018, they’d completed their final feature film, Summer of 67. Inspired by their father’s life, it tells the story of the women left behind in Vietnam… the women forced to wonder if their men would come home, and if they did, whether they’d be alive. The ones who didn’t know if life would ever be the same again.

But sales from the film were proof that the world had rotated away from the ingrained distribution channels of DVDs, yet had not quite settled on the new model.

Sharon and Fred knew it was time to adapt.

With a decade of movie-making experience, contacts, and equipment, what would they do next?

Looking back, Sharon realized her life had been a series of events promoting women. Even her bookshelf held stories about the famous women of the Bible.

Something inside her told her to turn to the church. While a triumphant servant of God and Christian, she’d never truly dedicated time to the serving—she hadn’t been a church leader or Sunday School teacher. Now, she felt strongly that it was her turn, and there was a need in the Women’s Ministry department.

So, Sharon stepped up.

The Women’s Ministry department is traditionally a place to address the spiritual, emotional, physical, and social needs of the women in the church. For Sharon, that was perfect. Supporting women had become her life’s work, and this was just a new adaptation of that work.

In the meantime, to fulfill her own need to continue to share stories, she started a Bible study at her home. Each week, the group of 12 women met to study the women of the Bible. Together, they came to the conclusion that no one is in the Bible on accident. If someone is in there, he or she is important.

The question for the women’s ministry group was, “Why?” 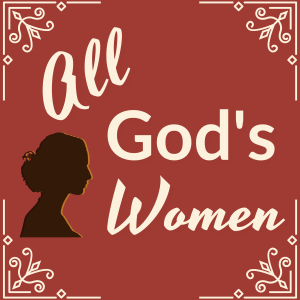 The simple idea of women getting together around a large table to share stories and grow closer to God, together, was over. The COVID-19 virus dismantled the weekly get-together, and the personal and family disarray around the unknown dissolved the group, leaving Sharon with stories, but without an audience.

Again, Sharon had an idea. She and her husband had plenty of equipment and experience in media and editing, as well as real knowledge of quality entertainment.

The stories she loved from the Bible wouldn’t have to wait—she’d start a podcast and share them with the world. Unbeknownst to her at the time, those she previously shared over a 12-person table in an old Victorian home would go on to feed the souls of thousands across the globe.

And unlike many other Bible-based podcasts, this one is categorized as History. That’s because Sharon does more than tell the Bible story; she ties in the history and shows how the story is relevant today.

In one episode, she connects a 1920s property rights court case to its Bible origins. Zelophehad, a man with five daughters, passes away, but doesn’t have any male heirs to pass property to. His daughters successfully lobbied Moses for a change in the law, and ended up with property of their own, paving the way for modern property law.

Since its inception, All God’s Women has been a weekly podcast that has accumulated 90 published episodes (for those who like to binge-listen). And now, a two-minute encapsulated version can be heard on radio stations across the globe.

Downloads is the measurement by which podcasters determine success, but for Sharon, there’s a more important number. All God’s Women reaches over 90 countries, and 30% of the audience is outside the U.S.

But what Sharon is most excited about is that the show is popular in three of India’s biggest cities, where less than 10% of the residents are Christian.

For a show about history and the Bible, that’s not a bad way to measure success.

The Holidays Are Upon Us… Cue The Family Drama!