The word conjures up images of little old ladies in support stockings and hairnets reusing tea bags and washing out Ziplock bags.

But frugal is not the same as cheap, and today, it’s becoming an increasingly common way of life—a simpler, back-to-basics lifestyle.

They are also quick to clarify that “cheap” misconception:

“One of the ways that I delineate between ‘frugal’ and ‘cheap’ is that ‘cheap’ takes advantage of people. ‘Frugal’ does not,” Jill states.

When it comes to our money, most of us want to make intentional choices and decisions based on our values. “Cheap infers doing whatever it takes to get what we want for the lowest price possible. But that is not always sustainable,” Jill continues. “Sometimes, it requires taking advantage of people, which isn’t kind. So, that’s my delineation. Am I taking advantage of somebody just to save a penny? Am I being cheap?”

Jen lives by the axiom that the frugal lifestyle is “just being creative. It’s not how I can live my life around squeezing every drop out of every penny.”

The podcast itself is built around four “pillars” of frugality: our natural resources, our physical spaces, our money, and the most limited resource of all—our time.

Jen expands these pillars to talk about life, “Because frugality isn’t just about money. It’s also about being a good steward of resources.”

One concept that crosses all four pillars is minimalism, which is a recurring topic on the show.

“We talk a lot about minimalism,” explains Jen. “Simple living is where that minimalist schedule, and being a good steward of your time, comes in. Those are the main pillars we talk about in addition to the personal finance portion.”

When it comes to choosing topics for their episodes, Jen and Jill ask their community what they want to know, learn about, or see more of.

“Our audience loves pay-off stories. And when they want to hear about topics we don’t feel best at conveying, we bring in guests who are,” Jen states. They are selective, however, as they only invite guests on every third episode.

“When we consider a guest, we have specific criteria,” explains Jill. “Do we know the person and how they talk? Are we allowing them space to speak on a subject that they don’t often get to? That’s fun for us. You’re not going to hear someone on our show who is on a bunch of different platforms, just saying the same thing over and over again. So it’s a sort of blending of topics and themes that we want as well as what our community wants. We then seek out experts in those fields.” 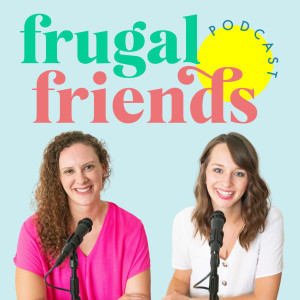 Ironically enough, Jill and Jen met in a roundabout way. Jill had met Jen’s husband at a party in San Diego, and the two became Facebook friends but never spoke again. Fast forward eight years, and Jill and her husband were traveling in their RV to St. Petersburg, Florida. Not knowing anyone, they posted on FB, asking if anyone wanted to hang out at the beach with them. Crickets—not one response. But later, Jen happened to see the post and reached out, saying they were going to be at the beach watching the sunset if Jill and her husband would like to join them.

That chance Facebook post was the start of a friendship that evolved into a business. Jen and Jill realized they had a lot in common around frugality, financial freedom, and the way they handled their money. In fact, Jill and her husband were traveling and living in their RV as a means to paying off their student loans. Both couples were working on a debt-free lifestyle, so the podcast had a solid base of real-life experience from which to draw.

Their backgrounds, as different as they are, contributed to their ability to podcast. Jen is a financial writer and spent a great deal of time researching, utilizing SEO, and optimizing her articles written for publication. She was able to use that expertise to quickly grow an audience for their podcast. Another ace in the hole is Jill’s husband, who was an audio producer. He actually had a hand in convincing the two friends to do a podcast in the first place.

Jill didn’t grow up with an abundance of money, so her experience naturally lends itself to the topic of frugality. “My grandmother lived through the Depression era, and what she learned about resources and how to make what you have last has been passed down over generations. I think a lot of what we’re talking about resonates across generations, and everybody has to engage with money in some way or another. People want to learn from those they resonate with… people who are approachable and explain things in a way that is understandable and relevant to their lives.”

Now, Jill’s “day job” is in the mental health industry, which brings yet another layer to their podcast. “I’m realizing that I can bring all aspects of myself into this show. And that has been really rewarding for me.”

The future is bright for the Frugal Friends Podcast. Its community of loyal fans consists of their followers on social media as well as a paid group that is helping add to the bottom line of their company. Jen and Jill offer challenges and workbooks for the group members, giving them first access to the material. Later, they offer these resources to the rest of their community, as well.

In all they do with the Frugal Friends Podcast, Jill says it’s always about “providing a space for people to not feel so alone. We support our audience in having even greater intentionality when it comes to their finances, with a focus on being frugal with their money. Of course, we always love bringing fun into it, too. It’s like Jen says… ‘If it’s not fun, it’s not Frugal Friends.’”

Now that would make a great bumper sticker.

UTR: Out Travel the System