So, a fellow with four kids, a full-time job as a railroad diesel engine mechanic, and a weekend Uber driver decides to start a podcast to show his kids what it takes to make a worthwhile contribution online.

Simple premise, right? Just show the kids the “why’s” and “how’s,” get them started, and job done. Cool motivation. Cool Dad. Alec Lace’s two boys were excited about the idea, too. They’d make a couple videos and become YouTube stars! Easy, they thought. And very cool.

Not YouTube savvy, Alec recognized that overnight viral sensations on YouTube were a “thing,” albeit rare. He set out to get up to speed on what really goes into it. Who knew what would grow from simply being an interested, involved, and supportive Dad!


As he researched, Alec discovered podcasting. It seemed a “doable” way to model the dedication, thought, and planning such an undertaking would require of his boys. He could use it as an experiment. A demonstration. Just what an amazing Dad would do, right?


“I figured this is a good way for me to put something out there to show them how to invest work into a project. Plus, I had a message about fatherhood that I wanted to get out there.

“Driving Uber on the weekend, I hear so many young men with a negative outlook on fatherhood. When I tell them I have four kids, they look at me like I have four heads. They seem to have the idea that becoming a dad and a family person would ruin their lives—it’s something they want to put off until much later in life, if ever at all.

“I wanted to put the message out there that, ‘Hey, this is the greatest thing that’s ever going to happen in your life! It’s something to embrace and go after!’ So that was the whole premise of the podcast. That became my mission: to try to change that whole negative narrative on what fatherhood and family life was really all about.” 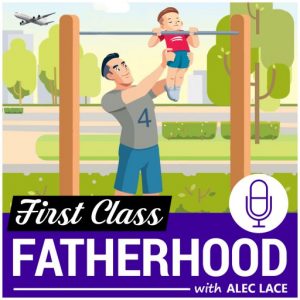 As if by magic, First Class Fatherhood: A Podcast for Pops made its debut, and now, just two years later, it’s going strong with over 40K downloads per episode of its over 340 episodes in just two years. Not only is Alec Lace a dedicated Dad, but he’s obviously an amazingly dedicated podcaster, too, interviewing celebrities and men sporting the nine-to-five lifestyle, military and civilian.

Alec’s Dad was fifty years old when Alec was born. A backup singer for Eddie Fisher in the 50s, he shared old movies with Alec as a child. One stuck with him: Brother Orchid, with Edward G. Robinson and Humphrey Bogart. Robinson, a gangster, laid low in a monastery after pulling a job. He’d been shot, and watched the monks living simple lives of service as he recovered before returning to a life of crime.

The movie made an indelible impression on Alec, who said:

“At the end of the picture, the gangster comes back into the monastery and says, ‘You know, something? I was once a guy that was always looking for class. I went halfway around the world trying to find it, because I thought that class came in nice clothes, fancy jewelry, and big money. But I realized something… that this is the real class—you people and service before self.’ That’s the real first-class position in life. And that’s why I decided to call my podcast, First Class Fatherhood.”

Inspiring! From Deion Sanders, Tom Brady, and UFC president Dana White to Navy Seals, Alec also interviews men with multiple jobs, big businesses, and side hustles to give listeners a broad view of attitudes toward life and fatherhood. He dives deeply into what motivates them, what drives them to be stand-out models for their children, and what they had to go through to recognize their influence in their roles.

Sometimes raw and vulnerable, guests share shifts in their lives that made them into who they are today—focused on the legacies they offer their kids—not in terms of cash and success, but in being human, kind, motivated, and real. Love Alec’s attitude!

“I’ve had the honor of interviewing so many men making a difference, too. It’s like you think, ‘Wow, look at that guy. If I could only be like that guy.’ And then you get a chance to hear him say, ‘You want to be like me? I love being a father.’ It gives them a chance to hear a positive fatherhood message from somebody they do idolize for another reason. And that segues into ‘Hey, look! This is a guy who really loves being a dad, and it’s the most important thing in his life. There must be something to it.’”

Yes, Alec, you’re right. There’s something to it! You give your listeners new perspectives, inspiration, and motivation to think deeply about a father’s contribution to the lives of his children, and about the positive possibilities in being a role model. Impactful. There’s definitely something to that. Well done!

UTR: Good Things in Life for Kids with Disabilities