As a passionate artist and podcast aficionado, it’s so gratifying and refreshing to have a heartfelt dialogue with amazingly talented individuals who’ve amassed great success and understand the intricacies of the music industry while remaining incredibly humble in sharing those journeys. Such is the case with Terry Wollman, producer and host of Making It With Terry Wollman.

It’s no surprise that his podcast has flourished throughout the years. Terry’s “chameleon” type of personality adjusts to everyone around him, and it’s easy to feel like you’ve known this guy for decades after the first five minutes of conversation.

Terry didn’t hesitate to explain his impetus for delving into the ever-changing podcasting medium as that of a “somewhat divine intervention.” His experiences interviewing artists over the past five years has afforded him deep insights into how certain artists fall into their role, and in most cases, it’s not by chance.

“It’s not an accident. I believe fate is involved, backed by a lot of intention, focus, passion, and definitely hard work. As for me, it’s something I’ve always loved. I just simply nurtured my talent through the education I received early on.”

Ironically enough, Terry isn’t the kind of artist who savors the spotlight, per se. He was more fixated on the idea of becoming a session player, but destiny showed him a better hand by having him grace the cover of numerous albums instead. And Terry had no intentions of going against the powers that be:

“A lot of my opportunities in my career have happened in no way near the way I expected, but I’ve always had a policy of openness… to walk through a door if the door opened, and then turn it into the opportunity that I fully believe it could be.” 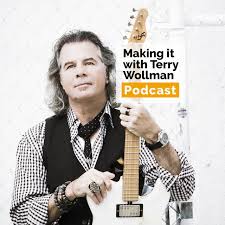 Terry credits his dad, who he lived with on a houseboat in Miami throughout his adolescent years, for first planting the seed of his aspiration to succeed in music—more particularly, in anything he set his mind to:

“My dad basically counseled me on being the best that I could be at whatever I chose to be… I wasn’t encouraged to be a musician or artist. I was just encouraged to dig in, be intentional, and stay focused. It was more like, ‘Whatever you decide to do, just be the best at it.’”

Sadly, at the age of 17, Terry lost his dad to an unfortunate accident. This loss left him with an obvious void as he embarked into a serious state of solitude. Unfortunately, living with his mom wasn’t a viable option, nor was it conducive to a healthy environment, so he felt it best to “man up” and forge ahead on his own. He shared how music became his salvation, helping him deal with the mourning process.

This wasn’t the only chapter of Terry’s life that deeply influenced his creative process as well as his beautiful array of musical pieces, and subsequently, podcast episodes:

“My creative process will always be evolving. I wholeheartedly believe that, when you are in a true creative state, you become a vessel… my creative process is essentially how I live my life. I’m always in pursuit of the magic. It’s this treasure hunt for the truth—for a way to express an idea in a new way, be it a melody, chord structure, or interview. It’s also about being present. I’ve always created a space for my creativity… a sanctuary where I can apply the valuable 12 notes that exist in our system in a manner that just flows through me and allows me to bring it to fruition in a cohesive fashion that inspires me. And if it inspires me, I’ve found that it inspires others, as well.”

Given Terry’s multiple talents and professional musical background, he certainly wears many hats. With so many responsibilities, there often comes less time with family and for leisure. So how does he do it all while managing to sustain a healthy relationship?

With a significant level of dedication, commitment, resilience, and selfishness:

“Sure, it certainly has impacted my life, but this is the only life I’ve known since I was 17. The impact would’ve been greater if I wasn’t as committed and focused as I was. In the intro of my podcast, I say to be selfish with your discipline, but selfless in your performance. When I am not, I realized I’m not a happy person, emotionally, spiritually, or physically. It creates an imbalance in my life.”

So relatable to creatives! We can’t expect our loved ones or friends to comprehend why we work on a project until the wee hours of the night and then wake up before sunrise to finish it, because very few understand that “to be continued” mode. Terry went on to add:

“At the end of the day, we’re doing a disservice to the world. People need to hear our message… above all, we must honor the gift we’ve been given and not take it for granted. So every time I get a melody, I treat it as the gift it is. That is the responsibility that comes with being a true artist.

“Above all, be gracious—especially to your supporters… with respect to my podcasts, I’ve been thanking mine for the past five years.”

In light of Terry’s long list of star-studded performances and collaborations, there is no doubt he’s enjoyed an enriched career full of accolades. However, he still has much to do:

“I’ve certainly had some remarkable experiences in my career, both from a writing and performing perspective in film, television, and the recording studio, but I’m far from done. The experience of music is not complete until the listener hears it… and there’s still so much more that people need to hear from me.”