In the world of burlesque, Siomai (pronounced “SHOW-MY”) Moore’s story is unusual.

While some folks don’t even take classes before they jump in and hit the stage, Siomai is a Type A superstar kind of person—and she spent four years intently studying burlesque before debuting onstage in the summer of 2018.

“There’s not a whole lot of money in burlesque, so I knew I had to keep my day job in order to be able to do my passion! So, I had to ask myself what implications there might be to my professional career from becoming a naked person on stage and on the internet.

“In the meantime, I was killing myself at work. It was less of a nine-to-five and more of a seven-until-the-janitor-leaves kind of job. I was exhausted.”

For Siomai, burlesque became the “bump and grind’ that set limits on the daily grind. Because she had spent so much time learning about the craft, diving into its history and networking in the industry, Siomai had already made a name for herself in the industry as a fan and passionate supporter. She had established a foothold in the community, so:

“I was able to make my debut and hit the ground running in a really thoughtful and strategic way, tackling it exactly as I would a new career, because in a sense, it was.”

It’s been a whirlwind. Starting off doing burlesque festivals and shows and traveling, it was only a year before 21st Century Burlesque Magazine recognized Siomai as number four of their top 50 burlesque performers, based on peer and fan votes. She was honored as “one of the most influential performers of the year.”

“It’s been a wild two-and-a-half years. I’m very proud of that. I quickly made it on this list that really big industry movers and shakers typically get on after a long career.”

What inspired Siomai to start a podcast, though?

As she started performing more and more, she spent more time on the road by herself. So of course, she began listening to more podcasts, and was inspired by those featuring interviews.

“I thought to myself, ‘What would a show like Fresh Air With Terry Gross be if it only featured burlesque performers?’ Burlesque is not just pretty people getting on stage and taking our clothes off. As performers, we are telling a story, right? And there is always a story behind the story.”

Siomai wanted to get to know the real stories and voices of the performers. She wanted to go beyond the “persona” they project on the stage to the real person and actual story that is the driving force behind the performer’s act.

As a fellow performer, she was also curious about her guests’ burlesque origin story and wanted to dive deep into their “why.”

The Pastie Tapes was born—the title a nod to the nipple tassels (covers called “pasties”) worn by burlesque performers. Pastie tape is the adhesive most performers use to stick the pastie to their skin.

“I think it’s cute,” Siomai says. “The name just came from something that we burlesque performers all have with us all the time. You know, it’s a thing that we joke about. Someone backstage is bound to not have pastie tape and be in dire need of borrowing some.” 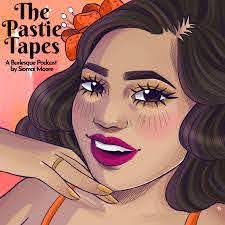 “As your readers may know, podcasting is a whole different thing. Luckily, my day job at the time was very slow, so I could get away with taking a few minutes here and there to Google ‘how to do a podcast,’ or do some research between busy seasons.”

Since launching, The Pastie Tapes has taken off. After only a month and a half, Siomai celebrated 2500 downloads of her nine episodes.

Siomai balances all that she’s got “twirling,” so to speak, by giving herself permission to focus on what it is she wants to focus on and by setting limits.

“I know that my joy comes from the conversations I’m having with burlesque performers and the opportunities to connect with other industry figures. So that’s part of my fun. I’m also recognizing that it’s of course a lot of work. If you’ve never worked with audio or in podcasting, there’s a lot to learn.

“When I started, I didn’t hire help. I didn’t hire an editor or producer or anything like that, because I figured if I want to do this, and if I want to learn how to do it, before I ask for help, I need to know what I’m asking for. As the podcast has grown, I’ve given myself permission to recognize that as much as I love it, I don’t owe anyone anything.”

As a marketer, Siomai knows that having an audience is key. Captivating that audience, just like in a live burlesque show, is really important to her. As someone who grew up on the Internet, she knew she couldn’t go to every single city to put on her burlesque show, but people in every single city around the world can look at her Instagram, Facebook, and website. And her listeners can hear the performer stories she shares.

“The podcast is obviously a conversation between me and another performer. But I recognize that my audience is made up of burlesque fans and burlesque performers, so I make sure they’re part of the conversation, too. I think one of the great things about the show is everyone loves learning about everyone else. And this is just one of those avenues to continue to connect this burlesque world.”

Under The Radar: Radio Cherry Bombe