Everything about ArtCurious exudes class.

Jennifer Dasal’s voice is classy, as are the episodes themselves. The carefully curated advertising, beautiful website, and curiosity-provoking content—like what Jennifer will cover during her upcoming trip to the French Riviera—all combine to add to the classiness.

The ArtCurious tagline is “The unexpected, slightly odd, and strangely wonderful in art history,” and Jennifer loves to tell the stories and share the history behind the great works of art. She studied Art History initially at the University of California, Davis, and did postgraduate studies at Notre Dame and Pennsylvania State University, but found that the academic approach to the subject could be a little dry.

So, when it came to her podcast, she wanted it to be entertaining as well as informational, and she certainly succeeds in that regard.

When she launched the podcast almost six years ago, she was working as a curator of Modern and Contemporary Art at The North Carolina Museum of Art. She has recently left that role to dedicate herself full-time to ArtCurious:

“The podcast was always meant to be a side endeavor, but it grew enough that I am now able to do it full-time.”

Jennifer divides the podcast into seasons—an approach she admits is a result of her longing to ensure she continues to have a life. When she started, and for the better part of a year, she released an episode every two weeks, but that schedule became unsustainable, particularly as a mom to a one-year-old who was also holding down a full-time job. The podcast was a one-woman enterprise, so Jennifer was responsible for everything—researching, presenting, writing, editing, and promoting. 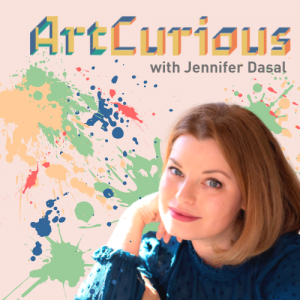 The first run of twenty episodes had no real rhyme nor reason, as Jennifer says, “It was something I wanted to write about, and I would sort of haphazardly choose which stories to cover, when.”

Dividing the show up into seasons, though, allowed Jennifer to frame episodes into thematic strands. This also provided her the time to do the research thoroughly (while also having a life).

She is especially proud of two seasons, in particular. The first, “Art and World War II,” allowed her to explore Hitler’s life as an artist, the looting during the war, the task of the Monument’s Men to restore the looted art, and the importance of remembering Holocaust Art.

The second is called “Shock Art,” and it spanned a whole year. For this season, Jennifer was interested in talking about the history of art that was shocking to contemporary audiences. For example, David’s painting of Marat dead in his bath, an iconic piece today, was shunned by many at the time for its representation of the controversial, revolutionary figure as almost Christ-like in death.

One of the great things about the podcast is that, unlike many history podcasts, the thematic, non-chronological approach means that the listener can dip in at any point and choose episodes that are of particular interest rather than feeling they have to start from the very beginning and work their way through episode-by-episode.

“There’s no need to follow things in any particular order—that’s the good thing. People often ask, ‘I would love to be a new listener to your show; should I begin at episode one?’ and I say, ‘I don’t know if it’s the best quality.’ You can actually start with any of them and work your way back as you want.”

Now, Jennifer has a team of support, including her husband, who is a video producer with a background in editing audio. She also has volunteer research assistants. She gets some help with social media, too, but says she hasn’t had a lot of success with it and finds the process quite time-consuming in itself. The final member of her team is her son, now seven, who she says is “a strangely excited and enthusiastic promoter” who thinks nothing of going up to strangers to encourage them to listen to his momma’s podcast.

Jennifer likes experimenting with ways of building the ArtCurious offering—she did a series of live interviews on Fireside, but she isn’t convinced they really worked. What she thinks will be more promising is her move to YouTube, which makes sense for a podcast that would benefit from visuals. This will allow her listeners to see the works of art being discussed.

Almost two years ago, Jennifer wrote and published her first book, and she describes the experience as “a dream.” The book shares the name of her podcast, but it is more than an extension of her show. Upon her publisher’s (Penguin) insistence, 66% of the book is new material not already covered on her podcast. She enjoyed the experience so much that she is already planning her second book.

She is also currently planning what sounds like an amazing trip to the French Riviera to study the Modernists. She is working with a company called “Like Minds Travel,” which approached her and asked her to pitch any trip she’d be interested in. France was a natural choice, as Jennifer studied there while in college. They will be based in Nice, but will be visiting places like the Chagall and Matisse Museums, and Renoir’s house in Cagnes-sur-Mer.

One technique Jennifer uses when she interviews people on her show is a lightning round of questions … so, we decided to employ the same strategy with her:

Favorite piece of art? The Horse Fair by Rosa Bonheur, which is at the Metropolitan Museum in New York.

Favorite museum? The North Carolina Museum of Art, of course! But also, The Rubin Museum of Art, a small museum in New York that specializes in Himalayan and South Asian Art.

Favorite period? All of them! Northern Baroque and 19th Century French art.

Jennifer will be appearing at Intelligent Speech on June 25th, so if you like the sound of her podcast, come along to the conference to hear her speak.