Africa is the world’s second largest and most populous continent after Asia. At about 11.7 million square miles including adjacent islands, it covers six percent of Earth’s total surface area and 20 percent of its land area. With 1.3 billion people as of 2018, it also accounts for about 16 percent of the world’s human population.

Africa is also culturally diverse. If you were to walk along a busy city street in Dar es Salaam, Tanzania, you might hear snatches of conversation in a cornucopia of languages. Towering office buildings would shade you from the blazing sun as you make your way past fruit, curios, and clothing vendors.

49, the podcast produced by the Center for Strategic and International Studies (CSIS) and hosted by Judd Devermont and Nicole Wilett, endeavors to transport you to all 49 countries in sub-Saharan Africa through the lens of U.S. policy toward each country.

“The mission of the podcast is to help policymakers, students, and African and European leaders think about the future of policy toward every single country in Sub-Saharan Africa,” noted Devermont.

Devermont is the former director of the Africa Program at CSIS. Before his tenure at the think tank, he served as a U.S. national intelligence officer for Africa, the CIA’s senior political analyst on sub-Saharan Africa, and as national security council director for Somalia, Nigeria, the Sahel, and the African Union.

“The mission of 49 is also to help demystify the monolith that people sometimes regard the region as, particularly in foreign policy circles, where ‘Africa’ gets grouped together,” Wilett said.

Because the podcast is really a micro-cast (episodes are just 15 minutes long), it’s easy to consume and digest. “It’s sort of like a teaser, where we tell you the basics about this country, but we give you just enough to get excited to come back for more,” Wilett added.

Wilett is the chief of staff at the Open Society Foundations (OSF). Before joining OSF, she worked at the Bill and Melinda Gates Foundation, where she served as deputy director for program advocacy and communications. She served twice as director for African affairs at the National Security Council during the Obama Administration, and was the senior advisor and chief of staff at the U.S. Embassy in South Africa.

There is a bit of debate about how many countries constitute “Africa,” but the 49 podcast refers to the 49 countries in sub-Saharan Africa, which is the way most of the U.S. Government thinks about the region, according to Devermont. 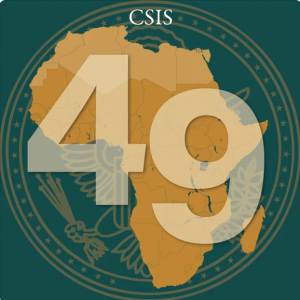 “49’s core listening audience is comprised of U.S., European, and African policymakers and diplomats,” Devermont stated. “We’ve also received feedback from students and certain U.S. ambassadors preparing for confirmation hearings that our podcast is referred to as ‘required listening.’”

“The point of the podcast is to ask people to think about whether they want to teach themselves more about some of these countries. It’s a complex place and hard to know everything,” Wilett pointed out.

Devermont became interested in sub-Saharan Africa after he studied abroad in South Africa for a year at the University of Cape Town, and as he put it, “I never looked back.” But he attributes an eighth-grade field trip to Washington, D.C. to sparking his desire to work in government.

Wilett became interested after growing up hearing stories of her mother’s service abroad in Senegal. Then, she too got a chance to visit Zimbabwe. Ironically, Wilett never wanted to work in government, because she felt true change could only come from the outside. But after a paid internship, she realized that good democracy also requires people fighting from the inside.

“My favorite part about hosting the podcast is asking the last questions, through which we really get to know our guests. Like, ‘What’s the best book you’ve read from this country?’ or ‘Where do you go to have the absolute perfect meal in this country?’” Wilett said.

Devermont was born in Los Angeles, CA, and grew up in San Fernando Valley. He is married, and they have a dog. In his downtime, he loves to run and gets admittedly grumpy if he doesn’t. “Running relaxes me, and my mind sort of spins,” he explained.

Wilett was born and raised in Syracuse, NY. She has two young daughters and, as of late, she enjoys horseback riding in her downtime.

Devermont concluded with the following advice to their listeners:

“Don’t conform to convention. Don’t assume that because ‘it’s the way things have always been’ that it should continue that way.

“Don’t accept the premise that Africa or African countries should be treated differently than other countries or shouldn’t get significant time or attention. Our podcast aims to delve into the fascinating histories of these countries. I want people to be inspired. I want them to trust their instincts and recognize that it’s okay to break with tradition and take on some risk, if we truly want to change the trajectory of our relationships. I want our relationships and our policies to be better, different, bolder, and more beneficial to both the U.S. and our African partners.”

Natasha Graziano: Guiding Others To Attract The Best Out Of Life