A Welcome Revolution For The Blind Community

Since the 20s, movies have been the premiere form of entertainment across the globe. Movie stars, the Oscars, soundtracks, and award shows have captured the popular imagination . . . unless you’re blind.

Movies rely heavily on imagery to help tell the story. While narrated, music montages, scene changes, and clever time sequences aren’t made for the vision impaired.

Podcasts, on the other hand, are entertainment for the ears alone.

A new podcast network called Storymore has set about to raise the bar for audio entertainment by creating, curating, and licensing the world’s best radio dramas to create movies in your ears.

They’ve already done The White Vault and Lamplight Radio Play, and they’re working on adding The Twilight Zone, The Harrowing, and Wooden Overcoats.

Particularly excited is the blind community, whose members seek entertainment that creates the imagery without a monotone narrator in the background.

Tanja Milojevic, dramatic podcast enthusiast and member of the blind community, said, “Usually, for us to experience mainstream media, content would need to be described with an additional track explaining costume changes and the visuals of a show. Radio drama does not need anything added to its natural, non-visual story, and that levels the playing field out of the box.”

One of their first in-house productions is a historical fiction production about the life of Jim Bowie (which is probably pretty exciting to you, if you’re an Alamo or Texas history buff—if you’re not, he played a prominent role in the Texas Revolution and in the Battle at the Alamo). 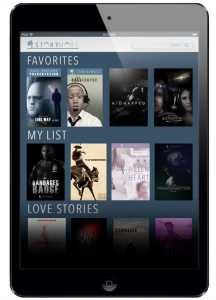 “In a young Texas town, a bright, young settler has been given the task of keeping law and order. Before history would ever recognize his name, he learns the truth about justice, sacrifice, and the costs of true liberty. With an experienced deputy at his side, James ‘Jim’ Bowie battles some of the early West’s institutions that opposed freedom in this historical fiction drama. Bowie leads the oldest town in Texas that was almost lost to a new invention called ‘America.’”

But unlike a history book, Nacogdoches isn’t a bullet-pointed timeline story of Jim Bowie’s life. The storyline follows many characters and covers how their stories overlap, cross, and interact. One such figure in American history whose path he crossed was Davy Crockett.

If you’re a history buff like me, you’ll go nuts listening to Nacogdoches. It’s like a virtual reality experience.

This is what I picture in the opening scene—mind you, this is a radio drama—no one tells you what to see:

I’m standing in a sandy place next to an old Mexican cowboy near an abandoned log cabin. He’s got wrinkles on his wrinkles and a hand-rolled cigarette in his mouth. The wind is howling past my ears.

The front door of the cabin is open, and a woman whose hands are bound is lying on the ground.

Then, a stranger walks up from what seems like 20 feet away through the sandy wind. The stage is set for a gunfight.

The stranger is taller and well-dressed, and you can feel the confidence in his voice. In fact, he’s going to win the fight. I can feel it in the voices.

Even though I only have earbuds in, the movie is playing out in my head as if I were watching it at the cinema.

The great thing about a radio drama is the producers understand how to use sound to trick your brain. They didn’t use footsteps to tell me the taller man was getting closer. It was more subtle, more real. It was the echo of the voice or the sound getting louder as he got closer.

And perhaps that’s because the couple behind Storymore are blind themselves. They tell the story of the Alamo, Jim Bowie, and Davy Crocket the way they’ve always dreamed it would be told.

As a person with full sight, their insight into sound is a delight to my ear.

In a world of one Dan Carlin after another, Nacogdoches is the underrated, unexpected movie you never thought would become your favorite movie of all time.

But it will be.