Sharing The Wisdom Of Remarkable People

Guy Kawasaki is probably best known for his role as Apple’s second brand evangelist. He is a founder, venture capitalist, author, and keynote and TEDx speaker. Currently, he is an evangelist for Canva, and while he continues with the above activities, he has also added “podcaster” to his resume.

Guy’s podcast, Remarkable People, is inspired by those he has met throughout his career and travels.

“I am the author of 15 books. I decided I had run out of things to say at this point, and wanted to tap into the wisdom of other people, instead,” he explains.

Inspired by sociologist Studs Terkel’s book, Working, and Studs’ interviewing style, Guy knew he could follow the same techniques with his podcast. “I’m 66 years old, and I have made a lot of connections in my life. I’ve also come to believe that more important than who you know is who knows of you. Podcasting gives me an opportunity to interview remarkable people who have a lot of wisdom to share.”

Many podcasters take several months to go from idea to launch; Guy did it within 30 days—which, to Guy, was too long, due to his background in technology!

Coming up with the name of the show was a challenge. Guy had just released his 15th book, Wise Guy, and from a marketing perspective, it made sense to title the podcast by the same name. “There was one problem,” Guy muses. “‘Wise Guy’ implies that it’s my wisdom I’m sharing, and it isn’t.” 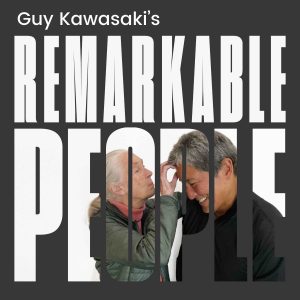 So, Guy began to consider the guests he would invite to his show, and every one of them had things in common in Guy’s eyes: they were all famous, smart, wise, and remarkable. Remarkable People felt right. “To my utter amazement,” Guy remembers, “I bought the domain remarkablepeople.com for a couple thousand. It was a no brainer!”

Next, Guy went into full planning mode, coming up with specific guidelines for the show. One of those guidelines: 95% percent of every episode would be about his guest and 5% about him.

“My job as an interviewer is to bring out the remarkableness of my guests and to help them explain to my listeners how to be remarkable in their lives, too.”

As a brand evangelist, Guy believed that “When you start a podcast, you really have to hit that first episode with something or somebody that will make people sit up and take notice.”

He also lives a charmed life, and exuberantly shared how he managed to “come out of the gates swinging” with his first episode:

“Someone knew of me, as opposed to knowing me personally, and that person happens to run TEDx Palo Alto. She had booked Jane Goodall, and after hearing about me because of my Macintosh background, she out of the blue reached out to me one day and said, ‘Guy, would you like to interview Jane Goodall at TEDx Palo Alto?’ I was already booked on an out-of-town event for a paid speech, but I bagged it! I asked myself, ‘How often do I get the chance to interview Jane Goodall?’ It literally cost me tens of thousands of dollars. But who is a better first guest for a brand-new podcast than Jane Goodall? Maybe Michelle Obama. Desmond Tutu. I’m running out of names. I would consider them a tie with Jane. I wouldn’t consider them better. So, my podcast began with her, and people did take notice.”

Finding guests for future episodes was easy after that. Guy laughs as he says, “One thing I learned is if you start with Jane Goodall, the fourth and fifth and 59th guests are easy. You just say, ‘My podcast is Remarkable People. I’ve featured guests like Jane Goodall. Would you like to be on the podcast?’ And very few people say, ‘Wow, you know, I’m so far beyond Jane Goodall… no, I don’t want to be on a podcast with second-tier guests like her!’”

Guy did an analysis of his first year’s guests and was surprised that of 60 episodes, 27 were women. While he didn’t plan it, he found that his podcast was gender-balanced and culturally inclusive. His guests have included Arianna Huffington, Kristi Yamaguchi, Andrew Yang, Julia Cameron, Dr. Vivek Murthy, Tim Ferris, Margaret Atwood, Governor David Ige, Andrew Zimmerman, and Steve Wozniak.

And while many of Guy’s guests are recognizable names, he also shares, “I don’t want to give the impression that this is a ‘famous’ or ‘rich people’ podcast. It’s a ‘remarkable people’ podcast. One guest is a woman who was smuggled from Mexico across the US border as a baby and today works for Adobe. You would not have heard of her, but she has a remarkable story. And I think each guest leaves a little bit of his or her soul on tape.”

Guy says he loves research, and his process takes about 15-20 hours per episode. “I love the preparation. Yesterday, I interviewed Angela Duckworth. She is a social psychologist from Penn and MacArthur award winner. Before I interview someone like her, I have to read her scientific papers, and I have to read her book. I have to ask intelligent questions. I can’t just ask, ‘What makes you tick, Angela?’ I mean, that is such a dumb *&% question!”

One of Guy’s most joyful podcasting experiences has been in reading the positive reviews he receives and knowing that he is sharing his guest’s remarkable wisdom with the world.

“There’s no doubt in my mind that I was born to podcast. I feel like this is a calling. This will show how transparent I am. As I look back on my career, the work I’m doing for my podcast is the best work I’ve done. I will also tell you that it is among the least appreciated. I told my wife the quality of my podcast will not be appreciated until I die. It’s just like art. An artist in his or her own lifetime may not be appreciated.”

Guy has only one small regret—that he didn’t begin his podcasting career earlier. “If I had started six years ago, when everybody else did, I would have an audience like Joe Rogan has today.”

“The irony is that, at the start of the pandemic, I thought it would actually be the best thing for my podcast, because people had more time. They were working less and not commuting. But I was so totally wrong.

“They get two hours back per day because they’re not commuting, right? But those are the very two hours people were listening to podcasts! So now, they don’t have the time. If people think that most Americans are sitting at home, sipping their chamomile tea while getting a pedicure and listening to podcasts because their perfect children are totally engrossed in Zoom and overachieving with virtual learning, they’re hallucinating. Suddenly, listeners are responsible for making Zoom work, playing teacher, and feeding children three times a day instead of once. And then, they have to go into endless and overbearing Zoom meetings for work—95% of which they don’t even need to be in, and the day is just ruined! I don’t think people are listening to podcasts nearly as much right now.”

This past December, Guy received his first podcast award—the Golden Crane Award for Best New Show given by the Asian American Podcasters Association.

A true wise guy, Guy leaves us with this:

“I truly do enjoy podcasting. At my age, one of the side benefits is that I think it will delay the degradation of my mental capabilities. Because now, at least 52 times a year, I have to be able to conduct a conversation with someone who’s truly an expert in some field. By forcing myself to come to grips with roughly 52 subjects a year, it keeps my brain more active. I’m not sitting around watching news all day long.”

66 years young, Guy can often be found surfing the waves… or making waves of impact with remarkableness.