Ready for a totally “Thank you, Captain Obvious” statement? The True Crime Category is a very big space! In order to stand out in the genre, wise podcasters create a niche within a niche, some utilizing a fusion, of sorts. Take, for example, my Under the Radar feature two months ago—The Great Fail—a combo of True Crime and Business. The same goes for True Crime Obsessed, a True Crime and Comedy mixture, which was last month’s category feature.

Just as brilliant is the amalgamation of True Crime and Politics in Hillary Dougherty and Tina Jaramillo’s show, The Muck Podcast.

“The title is a nod to the muckrakers in the late 19th century—the journalists who were exposing political corruption,” Tina explained enthusiastically. (For those of you who, like myself, are unaware of this historical reference, according to Wikipedia, the muckrakers were reform-minded journalists in the Progressive Era in the United States (1890s–1920s) who exposed established institutions and leaders as corrupt.)

I was of course curious about the draw these dynamic co-hosts have to this specific mixture of True Crime and Politics. “Tina and I know each other through politics,” answered Hillary. “We met while doing volunteer work for campaigns and candidates. She came into one of our meetings wearing a ‘My Favorite Murder’ t-shirt, and I just had to ask: ‘Are you a ‘murderino?’”

The rest was history. “We share a love of true crime and of politics—for the good and the bad of both,” Hillary added.

The pair realized that it would be difficult to stand out with yet another podcast in either category. “So, we came up with the idea of marrying our two loves,” Tina said. “We wanted it to be fun, so while we do cover some darker topics like murder, we also bring in some of the kooky and quirky politician [stories], so it’s a nice mix. I think it’s one of the things our listeners like about the show. It’s a variety and a blend of weird things that have happened.”

“True crime and politics go so well together, because both are about human behavior,” Hillary exclaimed. “Expecting something more from someone who is elected to office is ridiculous.”

“These are just people,” Tina chimed in. 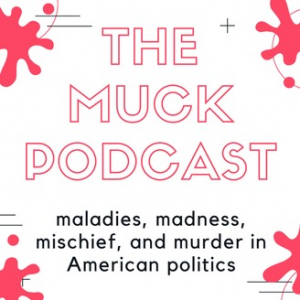 Although we tend to hold politicians to a higher standard because they hold public office, they clearly don’t always live up to that standard.

“Everybody makes mistakes,” Hillary empathized. “Everybody’s human. They’re very likely not going to be the messiahs people are waiting for.”

Agreeing, Tina spoke to the “sociopathic tendencies” of some politicians. “A lot of times, people who seek office do so because of ego, or similar less-than-admirable motivations. People often look to those who have a title like ‘mayor’ as somehow ‘better’ humans. But really, they can just as easily have no regard for ‘right’ and ‘wrong’ as anyone else. They just happened to have been elected.”

When it comes to The Muck Podcast’s fanbase, Hillary said they’re generally more interested in “the true-crime aspect. We emphasize that over politics, because our listeners love the stories. Politics itself can be exhausting. [Our show] is not like that at all. We talk about the crazy, goofy, insane stories that come straight from our history in US politics.”

In other words, “It’s not a boring history lesson,” Tina mentioned. “When people hear the word ‘politics,’ some shut down immediately. They often have a preconceived notion of what that means. That’s why we play with [the promotion], so people understand what it is we are actually doing… and so they don’t tune out before they even tune in.”

To illustrate the point, Hillary points to Episode 1: How Many Licks? “In the promo, we say, ‘This woman licks a guy’s face!’” she laughed “We are careful in how we draw listeners in. If we say, ‘We’re talking about politics,’ nobody’s going to tune in to listen to that.”

While politics may be considered boring by most, true crime is often viewed as a sort of escape. And that is what Hillary and Tina aim to provide, by covering off-the-wall stories like their nearly two-hour long Episode 15: Magical Vagina. Joking with the ladies that such a lengthy episode is a commitment more than a podcast episode, Tina laughed and replied, “We try to keep it to an hour.”

Hillary joined in the laughter, reminiscing about the editing process for that episode. “While I was editing, I was thinking, ‘It’s SO LONG!’ I cut so much out, but there was so much great information.”

“It really is about escaping,” Hillary segued, “With other podcasts, you know what’s coming. But in politics, you have no idea what’s around the corner. Someone seems like a great person, and then the mask comes off. He’s wealthy, going to Harvard, earning all these degrees, and then all of a sudden, he’s committing a crime.” She went on to say that political true crime can be even scarier than true crime, given that “they have the power to effect entire communities in terrible ways.”

“And it’s not just on the federal level,” added Tina. “We have covered sheriffs, school board members, and superintendents who seem like ‘regular’ people, but who are actually scamming millions of dollars, or running guns, or smuggling drugs. It’s wild.”

To that point, the most disturbing episode they’ve published so far may have been about the judge involved in human trafficking. “That episode was tough for me,” remembered Tina. “He used his power to take advantage of women.”

That wasn’t the only corrupt judge they covered, either. Referring to Episode 12: Patient Zero, Tina said, “The ‘Kids for Cash’ case was about a judge who sentenced thousands of kids to jail so he could pocket money. The cases that deal with hurting children or human trafficking are horrible, because these people were in an elected position that allowed them to take advantage of people. Those are the hardest ones for me to do.”

“I actually cried when I covered the AIDS epidemic,” Hillary continued. “Going through those stories was hard. I had a family member pass away from it in 1996, and of course, my family was affected by that. The lack of government involvement was absolutely horrifying to me. That was the hardest story I ever covered.”

True-crime stories can definitely be difficult to cover. But when it is combined with one of your passions, like politics, as in the case of Hillary and Tina, it can be a lot of fun, too.

One thing is for sure… there will certainly never be a shortage of political stories to choose from when finding topics for a true-crime podcast.

Making a Podcast can be Messy!