Created and independently produced by Roman Mars, 99% Invisible began as a collaborative project between San Francisco Public Radio KALW and the American Institute of Architects in San Francisco. 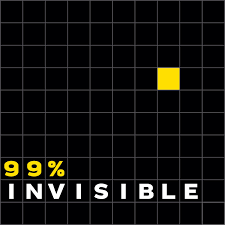 About the inception of the show, Roman says, “I was in radio because I loved to listen to radio. What really inspired me to be a podcaster was all of a sudden recognizing that I could reach the audience directly without a station manager telling me whether or not it was worth putting on the air, or if it fit with the sound, or if it was right for a certain time of day. The other thing was, quite simply, I had made 99 PI a little ‘module’ for the morning edition at KALW, and my friends didn’t get to hear it at the time it aired. They were like, ‘Well, you need to put it somewhere else.’ I thought okay… I’ll put it on a podcast.”

Trained as a scientist, Roman was a fan of architecture who also always liked explanatory journalism in general. So when he was approached by Matt Martin, the GM of KALW where he was working at the time, about adding an “architecture minute” segment to cover local buildings (the first of which, he was already consulting on and working on for Snap Judgment—the featured cover story for Podcast Magazine’s inaugural edition), he liked the idea. He thought about it for a long time before deciding that he could indeed do something like that—however, he wanted to broaden the concept to design in general. This way, he could cover and explain the built world in a way that would support listeners in ‘decoding’ that world in a new way. He wanted to make it a show that was about wonder in the mundane, and from the very beginning, he did.

“Now, 10 years later, the show has changed and shifted. More people have come on, and it’s developed organically, but the reliance on wonder in the mundane is still at the heart of it. The original show was four minutes long and was never meant to be a huge statement about design. It was meant to satisfy a curiosity or two. So, the whole ‘thesis’ of the show—what it means, what we cover, and why we cover it—is kind of this regression plot of different points. Then, you draw a line to connect them… and that is the thesis of 99% Invisible. It always shifts and changes. Sometimes, we cover a lot of big things and ideas, like the design of government, or something like that. And sometimes, it’s tiny things, like manhole covers and forks. The itch for me was that I needed some kind of frame to explore all the things I was interested in.”

He found design to be just broad enough and focused enough to be that frame. It has enough of a center of gravity while being wide-ranging enough for him—if humans made it, then it’s part of the purview of the show.

Since the podcast was the fourth project he was simultaneously working on at the time of launching, it was his nighttime “extra job.” His goal was to develop himself and his skill set areas like hosting, writing, producing, and launching a show on his own outside the public radio world. It was because of his deep ties to public radio that the show received a boost from his colleagues and friends who put him and 99% Invisible in front of their audiences, which helped the show really take off.

The real gamechanger, though, was the Kickstarter campaign in August of 2012. As 99% Invisible began gaining audience traction outside of the public radio system, the need for funding became real. The massive success of the Kickstarter (Roman met his fundraising goal in the first 24 hours) bypassed the station system and caused an existential crisis in the world of Public Radio. It became the second most funded Kickstarter in the Publishing industry and first in Journalism, raising over $170,000—enough to pay Roman and another producer and fund the show. From there, everything snowballed.

Still, while the money was pouring into the Kickstarter campaign, Roman was counting change at home to buy groceries. His advice to anyone considering this route to monetization is to make sure you have the audience to support the goals you are setting for your show first… and that you have plenty of coins in the piggy bank to hold you over just in case!

The success of the Kickstarter caught the attention of advertisers who recognized that Roman had built a connection to the audience and began investing in placing ads on his show. Still, it took one more Kickstarter that brought in twice as much as the first for Roman to see the show as self-sufficient, and he let go of the other jobs he had cobbled together. The Kickstarter model worked so well, though, that he used it a third time to raise $620,412 from 21,808 backers to form Radiotopia—a curated network of extraordinary, cutting-edge podcasts, including 99% Invisible, Criminal, Song Exploder, Ear Hustle, and more.

“I didn’t grow up with a lot of means, so I never overspent. When it came to my business, I never took investments. I grew slowly and deliberately, and that was just always the way I ran the shop. As you do more, you need more and more people, so when I had money, I hired them. That’s just the way it was. So suddenly, I was a boss, which is really weird, because I really was just a kid. I mean, I wasn’t a ‘kid’; I was in my 30s. But I was doing it alone. Not because I had this great desire to be alone, or I didn’t want a station to pay me lots of money to make it. I did it alone because no one wanted me.”

At the time of the first record-breaking Kickstarter, 99% Invisible had around 50,000 – 100,000 downloads PER EPISODE thanks to Roman’s existing audience and the traction and connection he had with it. That’s when Roman knew something special was going to happen.

“We built a genuine audience that was genuinely curious about the worldview of the show itself, because it was about being curious and engaged with the world and optimistic about design choices that were being made for them that they don’t know about or notice.”

Every wonder why the buttons on your shirts are on one side for men and the other for women? Why the fridge handle is vertical instead of horizontal? Who made these decisions, and why?

These are the types of choices designers made for you that Roman’s podcast explores.

Eight years and 450,000,000 downloads later, the show and the shop employs 13 people, has produced over 400 episodes, and has been the Apple #1 Podcast in the Arts Category and #8 in all podcasts.

Recently, Roman partnered with Kurt Kohlstedt to co-author the book, The 99% Invisible City, coming out in October 2020.

If you’ve ever wondered about the invention of incubators, or how a new kind of store window mannequin was designed in the 1930’s, or where the “smiley face” symbol originated—dive into the archives of 99% Invisible. Every single episode sticks to the core of a joyful exploration and explanation of the built world, which remains at the center of everything Roman and his team create.

Leveling Up Your Podcast