Anyone who enjoyed the film Slumdog Millionaire will be interested in the Sony award-winning Mumbai Crime podcast. They are both based on the bestselling novel Q&A, by Vikas Swarup, which Ayeesha Menon adapted to a 15-minute episode format.

Mumbai Crime is produced by Goldhawk Productions, which is run by husband-and-wife team John Scott Dryden and Ayeesha Menon. They specialize in audio fiction and have produced lots of content for the BBC over the years. More recently, they turned their attention to the world of podcasting.

John explained why he thought Q&A would be an exciting project:

“I got a copy of the book while I was in India, and as I read it, I immediately thought it would make a great audio drama series, because the story has a very episodic structure.

“We developed a very good relationship with the author. All of his books are going to be adapted for various 10-part seasons under the Mumbai Crime umbrella.

“The first season, which is available on podcast platforms, received lots of positive reviews, particularly in the United States, where we’ve been working with various companies for a few years now.”

One of those companies is PRX, whose Radiotopia network is well-known for its listener-supported, artist-owned podcasts. They approached Goldhawk Productions to explore the possibility of licensing Mumbai Crime and releasing it through Radiotopia, where it will join another Goldhawk Productions’ fiction podcast called Passenger List. It’s official, now—Mumbai Crime, including the upcoming seasons, will be released through Radiotopia.

John and Ayeesha have done several productions in India, and their strategy of using local actors sets their company apart.

“It makes it more authentic. We make the streets of Mumbai a part of the story. It gives the production a documentary type of sensibility and makes the world of the story feel real.”

The sounds are a big part of the setting, and this production team has figured out how to get them just right.

“Rather than put the actors in a busy street, we’ll put them in a quiet street and then add the busy street sounds, so we have more control over the quality of the production. We individually record all the sounds that we intend to use, so we can control when they come in and when they don’t. The great thing about a city like Mumbai is that there are lots of distinctive sounds, like rickshaws, beeps, and others you don’t typically get in other parts of the world.” 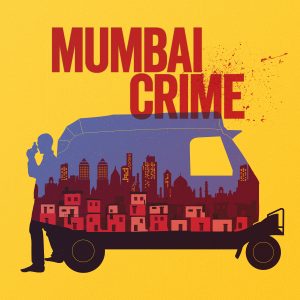 Ayeesha added, “When I first met John, he used to stand at the railway stations in Mumbai, recording the trains passing by and all the announcements. We’d be there for hours. We’ve walked through the slums to capture the sounds there. It’s very difficult to walk inconspicuously with a microphone through a slum in India, because kids keep coming up to you asking, ‘Hey, what are you doing?’”

Ayeesha’s path as a writer was not easy. She grew up in India and spent most of her life in Mumbai.

“I found that if you want to be a writer in India, you’ve got to fit into television, or something like that. There was no such thing as radio drama. I became interested in audio dramas for the first time when I acted in a show John had come to India to produce. That’s how we met. I thought the production process was amazing. It was so unlike the kinds of things that I had been trying all along in Mumbai. I asked him how I could get started writing for the BBC.

“Our relationship began, and it’s been really interesting for me to come to England and then discover that there’s a place for what I’m writing. Because I’m Indian, I bring a lot of projects from India and other places, so we’re in a unique niche.”

John shared his British perspective. “I guess we’re very fortunate in the UK, because audio drama never really went away. With the BBC, there are always opportunities to produce content and try to get a commission. And lately, fiction podcasts have become a big deal in the United States.

“I knew from a very young age that I wanted to do something like this. I wanted to tell stories dramatically, yet I didn’t know that audio drama even existed until after I left university. After I started hearing it on the radio, I realized that it was something I could get into. I also became very aware that there was a huge void in what I was hearing. Everything was done in the studio and sounded a bit like a stage play. I saw an opportunity to get in there and do it slightly differently.

“The first a project I did in India, 20 years ago, was an adaptation of the novel A Suitable Boy by Vikram Seth. I persuaded the BBC to commission it as an audio adaptation, which I wrote and directed. I had never worked in India, so I had to reach out and find a theater company that would come on board, because they would share the creative vision and have contacts and actors. It became the model for how we work in India and other parts of the world.”

John noted, “The one thing I find that binds together actors all over the world is their incredible ability to be present in the moment and focus. Really good actors do it incredibly well.”

John and Ayeesha have more than a year’s worth of shows ready to go. “We’ve got an original investigative thriller featuring a female detective. It’s called ‘Undercover Mumbai.’ And we’ve got a modern-day update of a Charles Dickens novel in store. It is going to be set on the streets of Mumbai.”

As the owners of an independent production company, John and Ayeesha bring a unique global twist to the world of audio fiction.