Quick … name one of only three people on the planet to launch three different shows to number one on Apple Podcasts.

If you just said, “Glynn Washington,” you’d be correct! He accomplished this rare podcast trifecta with Snap Judgment, Spooked!, and Heaven’s Gate.

(Know who the other two are? Like CA$H? Email us HERE with your answer by February 25. We’ll randomly select one person who answers correctly and send ‘em $100!)

250,000,000 downloads later, Glynn is still keeping it real. But, if you think he’s raking in piles of cash because he’s one of today’s leading podcasters, think again.

Part renaissance man, part cult survivor, and ALL storyteller, Glynn has an innate gift for connecting people of all walks of life through the power of auditory visuals … and for delivering the highest-quality productions to his fans.

It is this attention to perfection that makes Glynn a true master of the craft. It’s also the reason he nearly laughed himself out of his chair when asked if he’s clearing seven figures a year on his shows.

“It’s not a non-profit, but it might as well be an anti-profit,” Glynn shared. “The idea that I’m clearing seven figures a year is hilarious. For most of its history, Snap Judgment has been operated on a very precarious financial basis … we’re talking by the hair of our chinny chin chin.

“Does it cost us seven figures a year to produce our shows? For sure. We recently sent one of our top producers to Indonesia who was embedded there for months. Our expenses are extraordinary. No one is getting rich over here. And, honestly, we didn’t start the show as a business. We wanted to tell stories. To this day, I believe we’ve held true to that initial intention.”

Getting Snap Judgment off the ground to even arrive at the point of debating its profitability was no easy task. First, Glynn had to extricate himself from the self-described religious cult in which he grew up, requiring him to leave behind everyone he knew and loved. And in 2007, Snap had to beat out 1,400 competing entries to become one of just three winners in the public radio talent quest contest held by PRX and the Corporation for Public Broadcasting.

“At the time, in 2010, podcasting was nowhere near as popular as terrestrial radio. And while we had plans to launch the show as a podcast, our priority was getting onto public radio, because we felt that airing on NPR would give us a certain legitimacy,” Glynn recalled.

“But everyone said ‘no’ to distributing the show. I called NPR, PRI, and APM and they all said ‘no.’ At this point, we were seriously a stone’s throw away from just throwing in the towel. And then, I’m flipping through the television channels and I came across a documentary about Don King, who shared a strategy I hadn’t thought of. Knowing I had nothing to lose, I tried it.”

Over the years, Glynn has given countless interviews. Seldom sharing the real story behind how Snap Judgment secured distribution with NPR, he explained:

“So, I call up NPR and let them know that PRI is interested in distributing the show and they have until Friday to make a decision. Now, mind you, NO ONE is interested at this point. Then, I took a similar approach with PRI and APM. NPR was the only one who got back to us by Friday,” said Glynn with a hearty chuckle. “And, off to the races we went.”

NPR, however, had uninspiring expectations for the show, predicting only 20-25 of its stations across the country pick it up.

Glynn had other plans.

“Rather than sitting and waiting for the program directors to make the decision about airing Snap, we went straight guerrilla,” said Glynn. “Our first approach was to have people in the cities we wanted to air in call the stations and ask them to carry us. That worked well. Then, we started using Facebook targeting.

“Let’s say we wanted to get picked up in Cleveland. Well, we’d run a Facebook campaign in Cleveland to generate interest. In 2010, Facebook wasn’t anything like it is today. We could darn near blanket an entire city for pennies.” 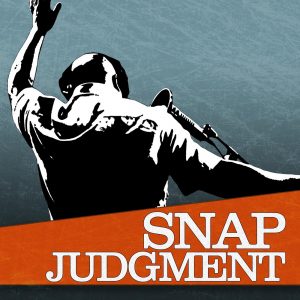 Snap’s success, in addition to the brilliance and commitment of the entire army of sound engineers, musicians, producers, and storytellers who coordinate efforts with precision, can be credited in large measure to the universal bond that connects us all—the power of story.

“No matter who you are, where you come from, how you were raised or what makes you and I different, if I talk about my mother, you immediately think of yours,” Glynn shared. “Storytelling’s true power is empathy. Our job is to use every audio tool available to allow you to wear someone else’s skin and share their experience. That’s Snap Judgment at its core.”

Perhaps it is Glynn’s unwavering commitment to empowering others to share their story—their truth, as opposed to a watered-down, fact-checked, overly regulated version of it—that allows the show to reach fans on a deep, visceral level. Tapping into real emotions, nearly unbreakable bonds are forged, fostering unwavering loyalty.

But success is never without its fair share of controversy. Recently, Glynn’s incredibly popular show Spooked!, which features “true-life supernatural stories told firsthand by people who can barely believe it happened themselves,” opted to release a portion of its episodes for free via traditional podcast channels, with the balance of episodes available via Luminary Podcasts—a monthly subscription service.

Listeners, those new to the show and the hardcore, longtime Glynn Washington fans, were less than thrilled. As of this writing, more than 300 one-star reviews have been posted to Apple with virtually none of the dissatisfaction directed at the content—rather, they reflect a universal disapproval of having to pay for access. Glynn nary missed a beat with his response.

“How dare I pay my people for producing a product? What needs to be understood is that the alternative is not between accessing Spooked! for free and accessing Spooked! behind a paywall. It’s Spooked! or no Spooked!” said Glynn emphatically. “The artist shouldn’t have to work for free, and I believe multiple models can thrive. People who go to work and expect a paycheck from their employer wouldn’t extend that same generosity to me and our team?

“I’m not going to be some slave driver. Artistry, time, original music, content, an army of people make a show like Spooked!, and each deserves to be compensated for his or her efforts. They have mortgages, food, health care, and other expenses they have to pay for,” Glynn continued. “$3.99 per month is a reasonable ask that a lot of people, thank god, agree with.”

Artists at the top of their game, such as actors, musicians, and singers are compensated at levels that far exceed average salaries. Podcasters should be no exception.

If comparing apples to apples, one could convincingly argue that Glynn, as the top one percent of the top one percent of ALL podcasters insofar as downloads are concerned, has achieved “elite athlete” / “Rock ‘n Roll Hall of Fame” level status. By all measures, he is one of the greatest auditory artists of our time who fully embraces his role of storyteller and leverages the spoken word to unite people from all walks of life.

“My primary role is to open a dialogue between people and to help them understand one another better,” says Washington. “When you talk about things politically, no one does anything. It’s not getting anyone anywhere. To capture your attention, to secure your interest, I need to tell you a story. A story is a sneak attack to having a real dialogue.”

And, if there’s anyone who can capture our collective attention and help us engage in a real dialogue during these increasingly divisive times, it’s Glynn.