“I was the kid rolling down the car window and yelling at a Hell’s Angel that I loved his hog!” – Liza Miller

When you are born with motorcycle oil in your veins, it’s only fitting that you share your passion with the world. Liza Miller, host and producer of the Motorcycles and Misfits Podcast, has always had a love of motorcycles. At nine months old, she posed with one for a baby photo. At 12, she learned to ride, and at 17, she purchased her first bike.

Unfortunately, she kept that purchase from her parents until her first crash—on the highway, with no protective gear except for the helmet she purchased at the thrift store for 75 cents. Luckily, the worst injuries she received were from her parents, who were less than thrilled about the bike and the crash!

The Motorcycles and Misfits Podcast was born in a motorcycle community in and around Santa Cruz California. The epicenter is Liza’s ReCycle Garage, where they do more than just work on motorcycles. There, a group of people of all ages and walks of life come together once a week to eat, live, and breathe motorcycles on Liza’s podcast. 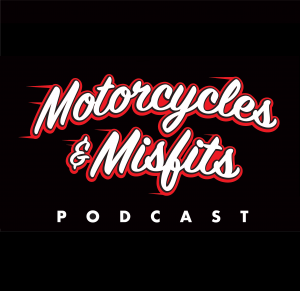 The Motorcycles and Misfits Podcast is a critically acclaimed weekly podcast that features the stories, experiences, and bike tales of a funky, fun group of biking enthusiasts known as “The Misfits.” (And by the way, there is just no way to convey how cool they actually are through this article!)

Liza started The ReCycle Garage to address a need she was hearing: people would often ask her how to start riding and/or how to get a bike without spending tons of money. Liza knew there were a lot of broken bikes needing repair sitting around in yards and garages. She thought if she could get them for free or “really cheap,” she could teach others how to repair and ride them.

So, about thirteen years ago, Liza opened The ReCycle Garage. She started with just a couple bikes but quickly ran out of space. Now, anywhere from 12-20 people show up on Sundays to talk bike smack and work on their motorcycles! They mentor and learn from one another and form the core of enthusiasts self-described as “misfits.”

“Some riders come to the garage to repair bikes and some come to hang out and teach. As far as The Misfits go, we pride ourselves on being misfits with one common bond,” Liza explained. “People love helping other people, so it perpetuates itself. The riders and wrenchers are better than me now, and I’m really proud of that.”

The Misfits are an eclectic group who go by names like Miss Emma, Naked Jim, Bagel, and Nak. They have come and gone as the years have passed, and Liza welcomes new riders. The only qualification is to be a rider and have a passion for motorcycles.

How did the gatherings of The Misfits evolve into a podcast? Well, as the group worked on bikes, they also traded stories, shared experiences, and taught one another. Liza wanted a way to capture those conversations, and Motorcycles and Misfits was born. It has since become critically acclaimed in the podcast and motorcycle industry. Liza’s guests have been notable, including raving fan Norman Reedus of The Walking Dead. Norman most recently appeared on the milestone 400th episode as a special guest. In 2016, he hung out at the garage while including The Misfits on his television show, Ride With Norman Reedus.

“Who doesn’t like geeking out on bikes with a bunch of misfits?” asked Norman.

Recording and editing a two-hour weekly podcast is a challenge Liza readily accepts. She usually doesn’t know what they are going to talk about until about half an hour before they start. The topics vary widely; if one of the Misfits is in a motorcycle race, they will talk about it. If there is news, they will discuss it. Liza also compartmentalizes the show into segments, so she can “plug and play” as needed. One of the popular segments of the show is “Porn Pic,” During which the misfits scour Craigslist for cheap bikes and then discuss whether each is a good deal or not.

At the beginning of the podcast, they recorded live in Liza’s garage. They would move tools, bring in equipment, and then pack in the garage to record. A few years ago, they moved to a studio, but the live and in-person element remained. They also added a YouTube channel to allow full Zoom recordings of the sessions to be seen. Currently, they are recording on Zoom, gathered around the computer screen to keep the podcast as close to “normal” as they can.

In addition to the Motorcycles and Misfits Podcast, Liza has been part of the Women Riders World Relay, leading trips across America from Maine to California. In 2019, over 3500 women riders participated in the year-long event, setting a record for the longest relay. Liza is also the creator of “Chickistan,” a women’s bike-tour group of Pakistan lasting almost two weeks. Liza’s goal? To “change the world’s perception of the people of Pakistan. As a guest, you are treated as a celebrity in their country.” A documentary of the tour will be released soon, and Liza is hoping to take another group in 2021. She is also working on a series of motorcycle film festivals called “RevSisters.”

When it comes to the success of the podcast, The Misfits say it is about “being passionate about what you do and not being concerned about how many people are listening.” Fortunately for the Motorcycles and Misfits Podcast, both passion and listeners are plentiful.

Author’s note: As a new motorcycle rider and enthusiast myself, I’m now a Misfit, and I will wear the name with pride!