The idea for the Chasing The Horizon podcast was born from a simple desire to have a straightforward motorcycle podcast. As Wes Fleming, the host, states, “What I really wanted was a podcast about the motorcycle industry based on all the different things going on in it. Whether it be about BMW, or Honda, or Harley, or some guy who runs an independent motorcycle shop or museum, or a photographer… really, all the different kinds of things people do in the motorcycle industry. And I couldn’t find that podcast.”

With a background in music production, the technical aspect of producing a podcast that so often stops podcasters before they even start was not a problem for Wes. “I had the equipment, and I had the skills to produce a podcast. So all I had to do was figure out what I actually wanted to do with the podcast,” he laughs.

Wes works for the BMW Motorcycles Owners of America, so he has ready access to a variety of contacts in the motorcycle world. His dilemma: he didn’t want it to be a podcast about BMW bikes.

“I have tried to distance the show a little bit from the BMW world, because everybody knows I work for the MLS. That’s not a secret. I love working there. It’s a great organization. I have fantastic coworkers who support the podcast. But I didn’t want to come across as BMW propaganda. We are independent from BMW, the company, and they have their own motorcycle podcast now. They didn’t when I started my podcast, but they do now. So, in the intervening time, I’ve especially not wanted for people to misunderstand where I’m coming from with Chasing the Horizon. I’m interested in the whole motorcycle industry.

“As a matter of fact, when I started Chasing the Horizon, I intentionally did it as myself. I didn’t represent it as part of the BMW Motorcycle Owners of America, because if it didn’t go well, I didn’t want it to reflect poorly on the organization. I just took the chance. Nobody really knew what was going to happen to it, or where it was gonna go, or anything like that. My biggest concern was not making my boss look stupid for letting me do it,” Wes chuckles.

Wes started the show with episodes on motorcycle news and happenings within the industry. From there, he began interviewing guests from popular YouTubers to motorcycle racers to those who work in the accessories industry and everything between. Wes even interviewed a guest who explained motorcycle accident statistics from the insurance perspective. There’s a bit for everyone who loves motorcycles in this podcast. 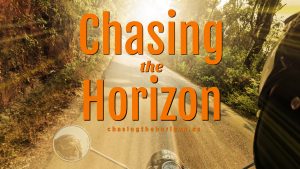 Originally, he did draw his guests from connections made through his position with the BMW Motorcycle Owners of America.

“Each year, we have a giant rally somewhere in the United States. And that particular year, 2017, it was in Salt Lake City. It’s part trade show with vendors and part featured guests. I just went through the list and started sending emails to anyone I thought would be interesting. It was like, ‘Hey, I’m thinking about starting this podcast. Would you like to be interviewed for an episode?’ And they almost all said, ‘yes.’ Then, they’d quickly ask, ‘Well, what are you going to do with it?’ And I was like, ‘You know, I really don’t know!’

“I decided I’d interview 10 or 12 people and just see what happens, so that’s exactly what I did. I think I had about 12 face-to-face interviews during the rally weekend, and I brought them all home and edited the audio. And then I started producing the episodes, just like that.”

When Wes initially started the podcast, he was casual and conversational, so he didn’t do much editing. Fellow podcaster and Motorcycle Misfit Liza Miller (interviewed in the May 2021 issue of Podcast Magazine®) gave Wes some very valuable feedback:

“Liza made me realize that more people than I expected were listening to the show, and I needed to up my level of professionalism just a little bit.”

Wes started paying more attention to the editing, and basically, as he says, “tightened it up.”

“In the beginning, I didn’t work off a script. I just had a list of the articles that I wanted to mention, and I reflected on them. And then I kind of made a mistake and left it in. Because what a lot of people don’t realize about podcasting is that, for the vast majority of podcasters, editing is the least fun thing you can do. It’s tedious. So I don’t spend a lot of time editing my actual interview. I don’t even call them ‘interviews.’ I call them ‘discussions,’ because I really want people to feel the ebb and flow of the conversation. I do listen to some podcasts where they take out every gap and ‘um’ and pause. And people have a lot of different ways that they prepare themselves to continue speaking. You don’t hear a lot of those things in a lot of podcasts.

“But that doesn’t bother me. I like a more conversational feel. So, unless somebody pauses for 30 seconds, I’ll leave the pause in, so people understand that the person is thinking about what I asked, or about how he or she wants to respond.”

Wes has expanded his motorcycle podcast enjoyment by producing The Ride Inside podcast with his friend Mike Barnes as well as yet another solo show, 200 Miles Before Breakfast for the BMW Motorcycles Owners of America.