Not all true-crime stories need to be gruesome, kicking off with something like, “129 stab wounds were found on the victim’s buttocks.” Sometimes, the story might just be about a family member who was involved in, let’s say, somewhat-less-than-legal activity.

The latter is certainly the case with Rewriting Dad, a story told from the perspective of co-host Leslie Bradford-Scott—the “daughter of a criminal.” Joining Leslie is co-host Megan Murphy, a criminal lawyer.

How’s that for irony?

Rewriting Dad is based upon the manuscript written by Leslie’s late father, Claudio, while he was in prison over three decades ago. Fortunately for all of us true-crime fans, Leslie didn’t just throw it in a drawer, burn it, or take it straight to Hollywood to make it into a movie.

No, her first instinct was to create a podcast from it.

Given all of her options, I asked why she made that choice. “I’m compelled genetically to act on things right away,” responded Leslie. “Making a movie in Hollywood would have taken years. And I am a huge consumer of podcasts. That’s how I spend my free time. I love the intimacy with the listener. You feel like you are in the same room.”

Speaking of feeling like you are in the room with the podcasters, Leslie wisely chose an equally engaging co-host in Meg Murphy. “I met Meg through some work I was doing with my business,” commented Leslie. “She just has this incredible personality. I felt that, together, we would be a dynamic duo for the podcast. I knew she would bring a different perspective to the story. She would get me questioning things that I wouldn’t question myself.”

Meg, a professional filmmaker and actress, was excited about the idea and ready to dive into the podcasting world with Leslie. However, there was one initial issue. “After she read the manuscript about my dad, she said, ‘I don’t want to hurt your feelings, but I don’t think I like your father,’” shared Leslie. “So, I had to convince her a bit.”

While Leslie’s dad certainly had his flaws and issues, it was clear from the podcast and our discussion that Leslie genuinely loved her father. “As I dove into the podcast, I began understanding his background as a kid and what motivated him to take certain paths,” Leslie reminisced. “It really became more like a healing journey. And it was funny! Funny to hear my dad’s perspective and my mom’s perspective. At its core, the podcast is about a healing journey. Your dad doesn’t have to have been in the mafia or jail for you to have a tenuous relationship with him. It’s about understanding forgiveness and healing as a means of going forward.”

Having listened to a number of episodes before my interview with Leslie, I knew Claudio had eventually become an informant for law enforcement in the United States. I asked if this was an attempt by her father to possibly “do the right thing” and turn his life around, or if he was, in essence, forced into that role.

“He became an informant because he had no choice,” answered Leslie. Claudio had fled the law in Canada and arrived in Florida where the DEA, CIA, and FBI caught up with him. He faced deportation, or… he could “be on the team.” Leslie explains, “He was told, ‘You have the connections and the background. We need guys like you.’ And my dad thought, ‘I guess I’m an informant now.’”

Via Claudio’s new career choice, Leslie gained a number of new non-blood relatives in her father’s law-enforcement colleagues. “My dad always had me call these guys ‘uncles,’” she said. “Now it’s like, ‘Holy crap! Uncle Georgio was with the CIA?!’”

Claudio’s role as informant led to Leslie’s first career, as well. “That’s how I got into the US Coast Guard illegally,” she explained. “Our family was in the United States illegally, and the only reason our paperwork existed was due to my dad being an informant. I wanted to go into the Coast Guard to fight drug dealers and rescue people from the stormy seas. At the end of my four years, when I wanted to reenlist, they said, ‘Wait a minute. You’re Canadian. What are you even doing here?’”

Apparently, Claudio and one of Leslie’s “uncles” created some paperwork and pulled a few strings to get her into the Coast Guard. “The kid wanted to be in the Coast Guard, so Daddy made it happen,” she laughed.

This account alone made me wonder who really has the more interesting life story—Leslie or her father. However, as with most stories involving a family, every member of Leslie’s family has been affected in some significant way by Claudio’s choices.

In Rewriting Dad, Leslie shares conversations with her mother and recalls the tragic death of her brother. 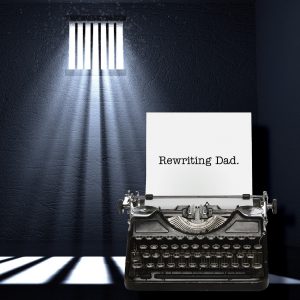 There are more than a few heavy subjects and difficult memories covered in Rewriting Dad. I asked Leslie if there are times when producing the podcast is emotionally cathartic for her.

“Just about every single detail is cathartic,” Leslie admits. “One of the greatest gifts from the podcast are the interviews I have done with my mom. I have that as part of our family archive. To hear her working through those details, I think ‘Wow, you went through some shit!’ I wanted to put her in more of a cocoon and protect her. The talks also helped me understand a lot of her motivations, like why she stayed in the marriage. I never forgave her before, but through those interviews, I understood.”

Season 1 of Rewriting Dad had just concluded a few weeks before my conversation with Leslie. So, I had to ask about the upcoming Season 2. “Think of Season 1 as an overview of the manuscript,” she explained. “Season 2 is about tracking down the real-life characters, interviewing them, and getting the other side of the story.”

(Sneak preview: One of those “characters” already contacted for Season 2 has suggested that Leslie’s brother’s death may not have been an accident.)

An intriguing feature of Rewriting Dad will continue in Season 2, as well—Leslie and Meg include conversations with guests on their family secrets as a segment of their episodes. “It’s interesting to hear the types of secrets that are out there. We are very selective about the ones we choose. We want them to be different. That’s why we don’t have a family-secret segment included in every episode,” Leslie said.

Apparently, what will also be included in Season 2 is the perspective of a detective from the 1970’s who worked on Claudio’s case—another one of the “real-life characters” Leslie has been able to track down.

The story for Rewriting Dad seems to just be getting started. To all true-crime aficionados, get caught up on the first season and buckle up for new episodes coming soon.

Under The Radar: My Camino the Podcast

Under The Radar: Snapped