The decision Melissa K Norris made to live a homesteading and pioneering lifestyle was a life-saving one for her and her family.

In her late 20’s, Melissa survived a health scare that involved her upper stomach and esophagus and heavy doses of medications. The physicians told her, “You have to get off these medications. You cannot continue to take them at the doses you are currently taking. You’re gonna have to figure out how to control this by the food you eat, or next time, you’re not going to be so lucky.”

Melissa, a fifth-generation homesteader, went back to her heritage and dove headfirst into researching the natural lifestyle. Since both her mother and father grew up in homesteading homes, this way of life was not new to her. Nor was it to her husband, who also grew up in the lifestyle.

While on her new journey, Melissa started blogging to share content about homesteading. Eventually, she wanted to expand it, but she didn’t want to start a YouTube channel.

Meanwhile, Melissa had been a popular guest on other people’s podcasts, and soon, the producers of a local radio station in its infancy approached her about hosting her own show.

“I thought, ‘Well, I really do like to talk. And I really am sharing and teaching.’ So I told him I’d give it a go and see if I could work my schedule around pre-recording episodes. I knew I couldn’t do it live.”

The show began, but several of Melissa’s followers couldn’t hear it because of its limited broadcast reach. So, she asked permission to post the radio show recordings on her website. 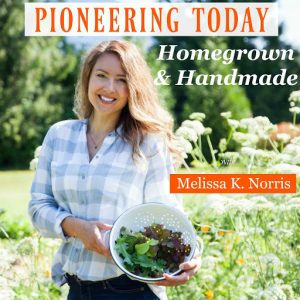 Eventually, her limited availability prevented her from going into the studio to pre-record the show, so she bought a microphone and set up to record at home. In addition to posting the recordings on her website, she started using them as an “official podcast.” The next step in the progression was establishing her business using the podcast as a tool.

Melissa’s new way of life, tireless research, and radio background ultimately led to the podcast, Pioneering Today. It covers all things homesteading and natural: growing your own food, gathering eggs, canning vegetables, living off the land, and more. It all goes back to a “simpler” way of life.

Via solo and guest episodes, topics are covered in detail, and Melissa provides complementary (and extensive) show notes, videos, and recipes.

Melissa is careful in choosing her guests.

“There’s a pretty robust process that goes into bringing a guest on, because I need to make sure it’s someone who truly is living the lifestyle and has years of practice in whatever he or she is coming on for. Sometimes, potential guests pitch from a research basis only—they’ve never actually lived it, and they’ve not done it—whatever the topic is. I have to have both… the practical knowledge and experience of the topic before I introduce them to my audience as an expert.”

Melissa has authored several books about the homesteading lifestyle, too. She has a huge following and is a big draw to the homesteading conventions she attends. She teaches the lifestyle through her classes and workshops, covering such topics as canning, homemade soaps, and organic gardening. She has also started the Pioneering Today Academy, a monthly membership forum that teaches the lifestyle complete with tutorials, recipes, and membership interaction.

Mainly, Melissa says, “I really think about how the podcast is serving the people who are listening and what they are getting out of it. Sometimes, it’s inspiration. Sometimes, it’s just keeping people inspired and excited to do these things, or even just helping them realize that something they might not have considered before is an actual possibility. I’m the person delivering it, but it’s not about me.

“For example, I did an episode on farm fitness, which was something I had never considered sharing. I mean, I work out so I can lift heavy hay bales, which really only happens once or twice a year. I never thought that my audience would be interested in that. And so I did an episode and actually added it to the YouTube account to show the moves that you do that will translate when you’re picking up a piece of equipment or material. So if listeners do that specific movement in a workout, it helps develop those muscles. It was a very well-received episode and video.”

Pioneering Today is personally rewarding for Melissa. She meets her listeners, often calling them out by name in the podcast, and the feedback she receives is what keeps her going.

“I like getting emails and messages from people who literally tell you that you have had an impact and changed their life. That’s what I want to do—improve and change lives. I would hope that every human being would feel that way. But when you actually get confirmation from someone you don’t know that you’re doing it… that you helped them or changed them, it’s a great feeling. Still, I didn’t actually do it. I simply provided the information. They applied it. They changed their life. I’m honored to be a small part of that. When you see that you are making a difference for people, it’s incredible.”