Patrick Hinds is a true-crime fanatic.

Co-host of the very successful True Crime Obsessed podcast with Gillian Pensaville, he punned, “I’m ‘obsessed’ with podcasts. I listen to about 30 hours per week.”

Eventually, his avid listening became motivation to create a true crime-based show that didn’t yet exist, complete with a touch of humor. “That was the genesis of True Crime Obsessed. If nobody listened, we would have stopped after ten episodes.”

People listened, indeed… and about 18.7k of them have left an average of a 4.6 out of 5-star rating, according to Apple Podcasts.

It might not come as a total surprise, then, that he absolutely had to launch Obsessed with: Abducted in Plain Sight—a separate podcast based on the well-known and controversial documentary about the kidnapping of Jan Broberg.

Yet one might wonder what inspired him to take on an entirely separate show—the first on his own Obsessed Network—rather than just run a series about the kidnapping on his existing podcast.

The answer? Skye Borgman—director and co-producer of the Abducted in Plain Sight documentary—wanted to team up.

Meeting with both Patrick and Skye via video chat, Patrick proclaimed joyously, “The director of the biggest documentary on Netflix reached out to us. We were really honored. We also really liked the movie, so Skye and I stayed in touch.”

Having already listened to all of the episodes of their show, I knew my conversation with these co-hosts would be anything but boring.

With the Fathers’ Day theme for this issue of Podcast Magazine top of mind, I began by asking Patrick how covering true crime affects him as a dad.

“Anything that has to do with missing kids or kids getting hurt affects me on a deeper level,” he answered. “Working with Skye on Obsessed with: Abducted in Plain Sight was a challenge, since it is about the abuse of a young girl. Having a six-year-old daughter, I can’t help but take it a little more personally.” 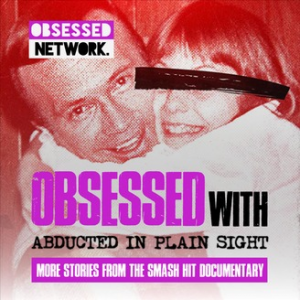 To say Abducted in Plain Sight is a ‘strange’ story is quite an understatement. In essence, it’s about a girl who was kidnapped not once, but twice, by the same neighbor, Bob Berchtold.

Whether watching the documentary or listening to the podcast, listeners experience a myriad of reactions as the details unfold. “Everybody brings their own perspective,” Skye agreed. “It is a shocking story. Every range of emotion you can possibly think of, I had myself while covering it.”

Skye started working on the documentary in 2014 when her (now) co-producer, Stephanie Tobey, happened upon the memoir Stolen Innocence: The Jan Broberg Story, published by Jan and her mother. “Stephanie was completely obsessed with the book. Get it? ‘Obsessed,’” joked Skye. (And yes, we all had a pretty good laugh.)

Looking into the details, Skye determined the story was one she definitely wanted to tell. “I wanted to figure out how something like this could happen,” she exclaimed. In fact, the Broberg’s tale would go on to dominate a good portion of the remaining decade in Skye’s life.

Patrick and Skye were able to finally meet in person at CrimeCon in New Orleans in June 2019. “We had a conversation on this perfect New Orleans night,” Patrick reminisced. “It was midnight, pouring rain, and we were at this quiet bar. Skye told us all these stories about things that got left out of the movie—plotlines, expert testimony, audio journals that didn’t make it into the film. There was just so much more story to tell. We were definitely inspired.”

Both ready to deep dive into the story that had become a huge documentary phenomenon, the two joined forces to co-host the new show.

As a listener, I can attest to it being difficult to not let this case consume you. Take, for example, some of the bizarre facts surrounding it. Patrick chimed in with what was his biggest shock:

“I think it was waiting an entire weekend to call the FBI,” he said. After it was obvious their daughter wasn’t going to be returned home by their neighbor, Jan’s parents were quoted as saying they “didn’t want to bother” authorities. “So, the dad figured, ‘I think I’ll wait ‘til Tuesday,’” Patrick quipped.

“People walk away from the movie with a lot of questions,” added Skye. So, a podcast dedicated to the Brobergs’ account seemed like the next logical step. “It was the perfect world to expand on this story.”

Patrick expounded on the creative process of the show. “Podcasts can be any length. They can be any style. The podcast we ended up making was different from the one we originally thought we were going to make when we started. That happens in podcasting, and I love that flexibility. The timing was right too, as the premiere of Obsessed with: Abducted in Plain Sight coincided with the one-year anniversary of the film’s launch on Netflix.”

Instead of simply taking a chronological approach, each of the four episodes Patrick and Skye produced approach the story from a different angle. “We narrowed it down to ‘buckets’ of information Skye had that the audience had been interested in,” Patrick commented. Those “buckets” morphed into four distinct perspectives: the one-year-later retrospective from the introduction of the documentary, a profile of the kidnapper, a deeper focus on the parents, and a review of how the film was made.

The 4.9 out of 5-star rating from over 2000 reviews speaks to how successful those episodes were in reaching listeners.

And the Obsessed Network is just getting started! “I can’t say too much about it, but the network is expanding and growing really fast,” Patrick grinned. “We’re just trying to keep up with its momentum.”

It’s a good bet that one of the Obsessed Network’s biggest fans—Skye Borgman—will be the first to tune into Patrick’s new shows. She apparently has become a true-crime fanatic, too!

Under The Radar: Voice Tech Podcast

UTR: Your Own Backyard