Elle Russ has been podcasting for seven years as the host of Mark Sisson’s popular Primal Blueprint Podcast with 500+ episodes and 20 million downloads! She just launched her own podcast, The Elle Russ Show, in September 2021. Elle is also a speaker, coach, and best-selling author of Confident As Fu*k, The Paleo Thyroid Solution, and The Manifestation Journal.

So, why did Elle choose to podcast?

“I got lucky. I was the seventh person brought on at a very fast-growing company. I kept getting promoted and was managing 100 people on huge tech projects. At a young age, all my financial dreams were coming true.”

However, at the age of 22, Elle sustained a repetitive strain injury that left both of her hands and arms permanently disabled.

“I could not even hold a fork, and it was 24/7 excruciating pain. What’s interesting in the world of hands is that no one really thinks about it until they have a problem with it. Then, they realize it is every motion.”

Although the company got extra help for Elle, she realized it was not going to work long-term, and she needed a drastic change.

“Back then, in 1998, there were no podcasts. I went back to my original kid thing, deciding to learn how to sing, act, and dance… basically, to figure it out. I ended up moving out to LA and performed sketch comedy and improv for over a decade.”

During that time, Elle wrote and performed in over 100 live shows and as an actor in TV and films.

“That speaking and improvisation is what helps me as a podcaster today.”

Elle ended up doing some part-time work for Mark Sisson (founder of Primal Kitchen Foods), and for the second time in her career, was an early member of staff in a quickly growing company. A couple of years in, Mark was so busy that he asked Elle if she would take over the hosting duties of the podcast, and she has never looked back! 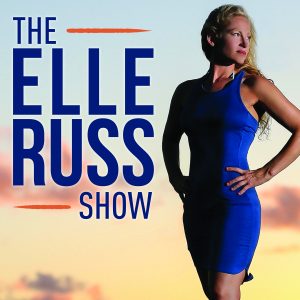 “That was great, as it gave me a platform to later bring people to my book and my coaching, but it also brought a lot of women into the fold for Mark, who had a lot of male fans.”

So, what have been some personal highlights in Elle’s podcasting journey?

“Refining my interviewing and public-speaking skills. Eventually, I also got to interview a lot of my favorite authors, like Bethany Hamilton, the surfer who last an arm to a shark. Her story is very inspiring to me, as I have an arm issue, but she doesn’t have an arm! I kick my own *ss to watch the movie Soul Surfer every year to remind myself.”

When it comes to facing podcasting challenges, there is only one at this point for Elle—and it’s something no podcaster can entirely avoid after completing hundreds of interviews.

“When I want to fall the fu*k asleep, because they are so boring. In that case, you just have to fight through it and carry the whole d*mn thing. I’ve even done a couple so bad, I couldn’t even upload the interview.”

Elle also hosted a couple of other podcasts on fixed, limited runs during this time. Then, with how 2020 unfolded, The Primal Blueprint (parent company) being sold, and having to build her own brand, the timing felt right for Elle to go all in on her own thing.

“I basically toyed around with it for about a year and a half. I am excited, but some of it is a little bittersweet. I’m happy that legacy is there, though, and ready to open up the new show.”

Elle already has 20+ dream guests booked for appearances on The Elle Russ Show. Some of the ethos for the new show are to transform your mindset, up-level your confidence and self-esteem, declare boundaries, and speak up.

Elle’s advice for any aspiring or existing podcaster?

“I would say you have got to get on other people’s podcasts, too. You have to be a self-promoter. You have to get yourself out there. If you are constantly worried and checking download numbers, that isn’t why you should be in it. There is an audience out there for everyone.”

This goes back to Elle’s Confident As Fu*k book:

“If you tell a friend, ‘I’m thinking of starting my own business,’ and that person tells you that 50% of businesses fail in the first year, tell them, ‘I am going to be on the 50% side of the fu*kers who succeed.’ That is an outlook situation.”

So, what is the future plan for The Elle Russ Show?

“I have realized that, over past decades, half the things I have done were never planned. In the case of my work, I had the perfect plan, and it was being executed. Then, I got the golden handcuffs cut off me, literally and figuratively. So, I am open to where it goes. I really just care about putting out great content that is going to inspire.”

To close this article, following is a quote from Elle that will hopefully make you smile…

“The best gifts in life come wrapped in sh*t.”

Despite major life challenges, Elle has gone on to write two bestselling books and help thousands of people around the world.

What gifts have you been given recently?