The heat of August not only spawned a deadly derecho in middle America, but it also launched Not Great with BuzzFeed News’ senior culture writer Scaachi Koul. This weekly comedy and interview podcast ruminating on politics, pop culture, and society “breaks down the news and what’s making us so miserable, all with the hope that we can find some bright spots in the wreckage. It’s Not Great, but at least we can dig through the garbage together,” said Koul.

Julia Cassidy, VP of Programming and Current Productions at Embassy Row, said Koul deserves a place in podcasting and television.

“I first saw her on Netflix and fell in love with her,” Cassidy said. “I thought, ‘This woman’s voice is so interesting.’ She doesn’t necessarily share the same opinions I do, but she is mesmerizing. She is completely free with her thoughts. She’s very progressive. She comes from a very specific point of view.”

Cassidy sees a bright future for Koul. “Her voice cannot only thrive in a podcast area, but in television,” she said.

Cassidy said the first reviews for Not Great are promising, and that her listeners—who she describes as those who want to hear a smart young woman who is very connected in all things pop culture and news share her opinions—know her from Buzzfeed. She also self-describes as someone who is “so up for going head-to-head with someone who disagrees in a really fun way that people enjoy listening to.” 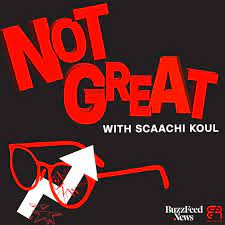 “People say sarcasm is bred from cynicism. I do think that’s true,” said Cassidy. “However, I find Scaachi’s sarcasm to be almost kind of joyful. She makes you laugh, and that’s the comedy edge of it.”

In the inaugural episode, “Oh No, It’s Still Bad,” Koul talked about how policing became an identity. She also spoke with Michael Baysmore, a Black cop in Baltimore, and Albert Samaha, investigative reporter for BuzzFeed News.

While Not Great highlights pop culture and news, Koul also brings her father into the mix, which adds humor and personality to the show.

In episode two, Koul looked at the weakened reputation of Ellen Degeneres’ daytime talk show and “the cult of kindness” therein with BuzzFeed reporter Krystie Yandoli, who broke the Ellen story wide open.

Based in New York, Koul is the author of a collection of essays, One Day We’ll All Be Dead And None Of This Will Matter, published in 2017; it became a Canadian bestseller and named a New York Times Book Review Editor’s Choice. She’s been nominated for multiple National Magazine Awards, and was shortlisted for the Stephen Leacock Memorial Medal for Humour. In 2019, she was nominated for an Emmy for Outstanding Arts, Culture, or Entertainment Report for her work on the Netflix docuseries Follow This. Her work has also appeared in The New Yorker, The New York Times, and This American Life.

Cassidy said Not Great drops weekly on Tuesdays with episodes running approximately 22 minutes each. It is a collaboration between BuzzFeed News and Embassy Row, and you can listen and subscribe on Apple Podcasts, Spotify, Stitcher, Google Podcasts, and Soundcloud.