In 2015, English major Jason Weiser listened to podcasts while commuting to his hospital research job. But he couldn’t quite find one that spoke to his interest in folklore, mythology, and legends.

“I had all these books on mythology and folklore, and the real stories were much more interesting to me than the adaptations out there. But nobody knew about them,” says Weiser, who started thinking of launching his own podcast “as a complete hobby, just for fun.”

He pitched the idea to his wife, Carissa, a doctor of audiology, and she readily agreed, seeing the possibility of it replacing their jobs long before anyone was actually doing that in podcasting. Their inaugural endeavor, Myths and Legends, puts a modern slant on beloved stories of knights, dragons, wizards, Vikings, and heroes like King Arthur, Aladdin, and Hercules.

Jason started slow. He recorded three episodes, and then let them sit for six months, because he was too nervous to publish them—until he accidently did. “I thought I’d be able to procrastinate another six months, and then the whole idea would die. At that point, I wouldn’t have to worry about it. But there was no ‘confirm’ button on iTunes back then. You just hit ‘publish,’ and it was out there for the world,” he says.

Carissa recalls their excitement when they reached 11 listens with a laugh, because they quickly realized the tally was likely them checking the views. “We thought it would be really cool if, at some point, we had 100 people listen to this random hobby we were pursuing,” she says.

That was seven years ago, and combined, their podcasts have since surpassed 180 million lifetime downloads—about 2.1 million a month.

“Numbers are one thing, but consistency and persistence count for so much more,” Carissa says. “It’s such a long game,” Jason adds. “I think if you can prove to people that you’re around for the long haul, they can get invested in your show, and that goes a long way.”

When they started their podcasting venture, Carissa worked outside the home, while Jason cared for their baby and snuck work in during naptime. After their son—who is now seven—went to bed, Jason and Carissa wrote, recorded, researched, and labored over the podcast until [2:00] or [3:00] in the morning. 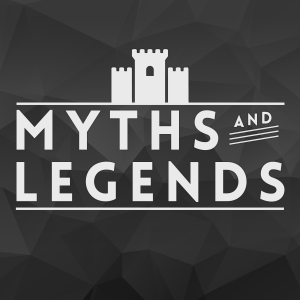 “It just was not sustainable,” says Carissa, who finally left her job in 2017 to work on the podcast full-time. “Quitting helped for a while, but then you start growing and doing more, and suddenly, you’re eating that extra time you once had. That’s when we really started putting boundaries on our work time. You have to be organized but flexible within that organization… if you aren’t, it creates stress that can be detrimental.”

As Myths and Legends became popular, the Weisers pondered other interests. This led to the birth of a similar podcast, Fictional, which presents classic literature in a modern, casual tone, and Best of The Worst, a collection of vignettes about ridiculous heroes and villains from comic book history—complete with fake ads. They also partnered with Kast Media on Scoundrel: History’s Forgotten Villains.

This means the Weisers spend a lot of time together. “We always joke that the best way to grow your marriage is to try to work together. We have changed our work process a lot over the years, and what we found to work best was having separate offices and shared to-do lists,” Carissa says, adding that now, they have individual home offices and a renovated recording studio. “The lines are very blurred.”

With hundreds of episodes published, the Weisers stay excited about their work, because they’re interested in the stories they share. Jason is fascinated by the fact that the stories they feature in Myths and Legends are thousands of years old, but still reveal the human element with the same motivations and fears people experience today. Carissa points out that listeners can relate to themes that run throughout the stories––like choosing between one’s duty to job, country, and family, feeling slighted by a friend, seeking revenge, and just trying to figure out how one fits into the bigger world.

“At the heart of the stories is representation from males and females, young and old—people of position and people who want it, and people who have it but don’t want it. You have everything in there that oftentimes is buried in the progression of ‘this happened’ and ‘then this happened,’” Carissa explains. “There’s really something that everybody can relate to in these stories.”

For Jason, one of the best parts of working full-time on podcasts is being able to use his degree. “It’s so cool to be able to buy whatever books I want about mythology and folklore and legends, and basically get paid to read them and explain them—it’s 100% my personal dream job,” he says. “We always just make the show we want to listen to, because that way, we’ll always have an audience. If we find it interesting or compelling, then other people might, too.”

To aspiring podcasters, he adds, “If you’re genuinely excited about what you’re making, it not only means you’re onto something, but it also makes it a really fun thing to do.”