Melissa Victor, creator of StoopKid Stories, is known for her bubbly energy that lights up the room, whether she’s speaking at Podcast Movement or in character on her show.

It’s hard to believe she was initially resistant to the idea of starting a podcast.

While she was chasing her Broadway dream in New York City, there came a time when she was in between gigs. Melissa remembered this turning point like it was yesterday:

“I prayed—‘God, I need to feel creatively fulfilled. What do I need to do next?’”

“I thought God was gonna send me a TV show or movie to show me I should transition from theater to film. Instead, what came to me was that I needed to make a podcast. My response was, ‘No, I’m not doing that.’”

Nevertheless, the idea of a podcast came to her with very specific instructions to tell stories, particularly stories of Black kids, based on her own experience of growing up in Baltimore.

She recalled the moment she finally gave in and said, “Okay… this is what you want me to do, even though I don’t know what I’m doing.”

Melissa previously hadn’t been an avid podcast listener, yet she challenged herself to write a story as a test run.

“I had written lots of stories when I was younger. If I hadn’t done a bachelor’s degree in musical theater, I would have gone to school for creative writing. It’s interesting how things come full circle.”

Even though she wasn’t sure whether she still had her writing chops, Melissa sent her story to a couple of her friends. “I had already planned that if they told me it sucked, I wouldn’t start the podcast.”

The opposite happened! Melissa’s friends said, “Oh my god, this is so great. I love it! If I had kids, I would read this to them.” This was a resounding confirmation that she should take the plunge, so she pressed “record,” and as they say, the rest is history. 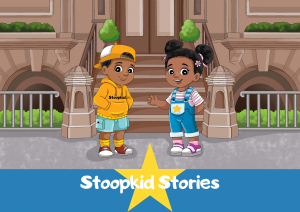 This was over a year and a half ago. Since then, the Stoopkid Stories audience has grown by leaps and bounds as they follow fun, exciting stories featuring seven young Black characters who face a new adventure in each episode and have to overcome different obstacles related to their friends, family, school, and community. Each story is written by Melissa and holds a lesson, which she hopes will spark conversations everywhere.

Melissa still can’t believe how popular the show has become.

“I have to thank the Kids Listen community, because they really poured into me and showed me what to do and how to do it. Members of the community, like from Stories Podcast, said, ‘I want to promote you on our show.’ Kids Listen is such a tight-knit group. I am forever indebted to them.”

Melissa has had stellar collaborations with other podcasters, including the team from Imagine Neighborhood. “On What If World, the stories are improv, and I was invited to do a joint improv story.” She has also done some voicing for The Past and the Curious.

“There is currently a focus on amplifying Black creators and Black voices, and some conscientious storytellers want to bring in a Black creator to help tell the story correctly.

“Some podcasters wanted to talk about racial injustice and how to discuss this topic with kids, so why not bring in a Black creator to help? I co-wrote some stories with other podcasters, because they wanted to be very careful about how they were presenting certain situations like police brutality and racism in school.”

If Melissa’s stories seem true-to-life, it’s because they are… even the light-hearted ones.

“As I was walking through the city one day, I knew someone must have taken out her braids, because I saw a clump of braiding hair on the ground. I watched it tumble down the street, and a thought hit me: ‘That’s the story: The Magical Tumbleweave! Why not have the four girls sitting on the stoop, learning how to braid hair?’ After all, that’s how I learned to do it—sitting on a stoop. In the story, suddenly the clump of braiding hair could turn into a wig, and the girls have to chase it through the city.

“When I was planning the podcast, I wondered, ‘Where’s the show where we’re all at the cookout, and we all look the same?’ Growing up, my church and my school were all Black. I was on an all-Black swim team. I went to Spain on a music tour in high school in an all-Black choir, and we also sang at Carnegie Hall: activities you might not normally think would be Black experiences. I really wanted to hone in on that, and I wanted Black, inner-city kids to see themselves represented in a way that didn’t involve gang violence.

“Kids who live in the city are just regular kids who get bullied, go through puberty, and so on. They have responsibilities, they get into trouble, and they ride their bikes just as kids do in the suburbs. It’s not that different. I thought that if a range of people want to listen, that’s great, but I knew this would resonate with at least one Black kid out there.”

An unexpected outcome has been that transracial adoptees and their families are among those who have gravitated to the show. This means a lot to Melissa, because she too is adopted (though in her case, her adoptive parents are Black).

Melissa shared the details of her latest masterpiece:

“I recently had the opportunity to write, direct, and choreograph Stoopkid Stories LIVE!, a fully-staged musical based on the podcast. It took place at the Summer Theater of New Canaan, and it was a hit!”

What’s next for Stoopkid Stories? One thing’s for sure—Melissa Victor has a winning attitude. With her strong sense of purpose, the possibilities are endless.