Former U.S. President Barack Obama believed that there is no greater threat to our children, our plant, and our future generations than climate change.

In fact, Obama stated, “The world must come together to confront climate change. There is little scientific dispute that if we do nothing, we will face more drought, famine, and mass displacement that will fuel more conflict for decades.”

His words echo the sadly alarming truth that our beautiful planet Earth is ill. She has been running a fever for quite some time, and human activity is the major source of the problem.

That’s why the mission of the Cape Cod Climate Action Podcast, produced by the Cape Cod Commission and hosted by its Communication Manager Sarah Colvin, is designed to follow the work of the agency and its partners as they work together as one Cape to build resiliency. “With its over 500 miles of coastline, Cape Cod is extremely vulnerable to climate change,” Colvin said. “We have a robust population reliant on the ocean and our marine industry. Adapting to and mitigating the effects of climate change in our region is a critical challenge for us.

“The Commission is currently working on the first-ever Cape Cod Climate Action Plan. The plan will identify, study, and monitor the causes and consequences of climate change in the region as a basis to guide and develop science-based policies, strategies, and actions that can help improve the region’s resilience to climate hazards and reduce net regional greenhouse gas emissions.

“For instance, our staff recently completed a Greenhouse Gas Emissions inventory and found that the transportation sector is the number one contributor to greenhouse gases in the region. So, one of our recent podcast episodes focused on our regional transit system’s efforts to reduce its carbon footprint, along with carbon reduction initiatives included in our regional transportation plan.

“Our core listening audience spans a broad sector of the population,” Colvin continued, “and that’s one reason why we were motivated to do the podcast—because we really wanted to connect, interact, and engage with the folks here. 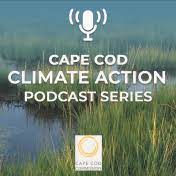 “The goal is for listeners on Cape Cod and beyond to understand the work of the Cape Cod Commission, not only in terms of climate change adaptation and mitigation, but our work in other areas, such as water quality, historic preservation, planning and community design, and so on.

“Our mission is to ‘keep a special place special’—more specifically, to protect the unique values and quality of life on Cape Cod by coordinating a balanced relationship between environmental protection and economic progress. We explore this mission through the lens of climate change in this podcast series.”

Colvin lives on Cape Cod, where she was born and raised, with her husband and two dogs.

“I can’t imagine living anywhere else. The Cape is such a wonderful place,” she said. In her downtime, she likes to bike ride and explore the beauty of her area.

Colvin’s background is in radio and television. She was a morning news anchor for a local station on the Cape, and before joining the Cape Cod Commission as the Communications Manager, she produced a local community access television show on the Cape.

“Because my background was in radio, I was excited to host the podcast, which debuted last September. What I missed and loved most is interviewing people. So it’s great to hear people’s stories and perspectives and have those in-depth conversations. I think that through conversation, you can really give people an insight that they otherwise wouldn’t get. It’s different than just watching something on TV. It’s about being able to engage in those dialogues and share. That’s my favorite part about hosting the podcast.

“I want listeners to walk away feeling a bit more educated and aware of the problems we’re facing, and to know that we as a community are working toward real solutions.”

A book that made a profound impact on Colvin is Touching My Father’s Soul: A Sherpa’ Journey to the Top of Everest by Jamling T. Norgay. In it, the author recounts his journey to climb Mount Everest, following in his famed father’s footsteps, who was the first to reach the summit of Mount Everest with Sir Edmund Hillary in 1953.

“I’m not a mountain climber, and I would never try to climb a mountain like Everest. What moved me was the amount of planning, resolve, and tenacity it takes to undertake such a feat. All the adversities he faced; I give him so much credit. It was a remarkable book.”

“There’s something really special about this place, and it’s not just its beauty. We as a community have a sense of pride and togetherness that is really noticeable. Cape Cod is made up of 15 unique towns and seven villages, and each has its own distinct characteristics and little quirks. But we’re all one Cape. That’s what I miss the most with this quarantine—the community.

“I hope our podcast helps people understand how the work the Cape Cod Commission does every day impacts our community, and that solutions to issues such as climate change are found when we all work together.”

Changing The Landscape Of Podcasting Through True Crime