In a number of true-crime enthusiast circles, Sword and Scale is one of the podcasts that continually comes up in conversation. This is far from surprising since its creator, Mike Boudet, has been putting out quality content through the program since 2014.

Most importantly, Sword and Scale is one of just a handful of podcasts to make it on our Hot 50 seven times or more in 2020, as reported in the January 2021 issue of Podcast Magazine®.

One fun fact many true-crime fans may not know is that Sword and Scale is actually listed under the History Category on Apple Podcasts! My apologies in advance to the new History Category Director of Podcast Magazine® for swiping this one. In my defense, the show is described as “true crime” on Wikipedia.

I was able to catch up with Mike early this year for a conversation about how a true-crime podcast winds up in a different category than perhaps expected, what it was like in the early days, and much more.

Given the length of time Mike has been producing Sword and Scale, I asked him if he considered himself one of the pioneers of the true-crime podcast.

“I don’t think I’m the best true-crime podcaster in the world,” he responded. “I do know that when Sword and Scale was conceived in 2013 and launched in January of 2014, it was the first podcast that ever incorporated the elements of documentary-style filmmaking into an audio format and immerse the listener with 911 calls, courtroom audio, and police interrogations. There was nothing else like that at the time. There was in other genres, but not in True Crime.”

Mike reminisced that Serial, another popular true-crime podcast, launched nine months later—October 3, 2014 to be exact. “That changed the world,” Mike commented. “It changed the whole landscape of podcasting. Not just True Crime, but everything. Not just from the perspective of creative, either—it became such a mainstream hit that advertisers and outlets started looking into the podcast space.

“We weren’t the first true-crime podcast ever,” Mike continued. “That wouldn’t be accurate. We were the first to do it in the way that everyone is doing it now.”

Staying in the realm of 2013-2014, I asked Mike about the motivation for starting Sword and Scale.

“I had started several other podcasts before it,” stated Mike. “I had started a comedy podcast. I had done one that was like Lifestyles of the Rich and Famous, but it was all about the products and the things they would buy that were just so ridiculous.

“I also did one about the paranormal, UFOs, Bigfoot, and all that kind of stuff,” Mike laughed. “It was all based on another show that was my favorite podcast. Mind you, during this whole process, I was working a fulltime job. You know, I’m an adult!”

We both chuckled at that one and debated whether either of us could truly identify as an “adult” even at our ages.

“You know what I mean. I think you still need to get up and pay your mortgage somehow,” Mike clarified. “Before, I did mundane tasks, like spreadsheets I could do in my sleep. But the other part of my brain—the creative part, the part that’s curious—that part of my brain was dying in that dimly lit, fluorescent-light cubicle amongst a sea of cubicles where people go to die.”

Mike mentioned that while languishing in that cubicle, he would often listen to Mysterious Universe, his aforementioned “favorite podcast.” The podcast is still available today, and he gives it credit as one of the influences that eventually motivated him to launch Sword and Scale.

Mike is spot-on here, as love and hate are on the same side of the coin in that what you have created induces a visceral reaction. You’re neither entertaining nor helping anyone when your audience is bored. 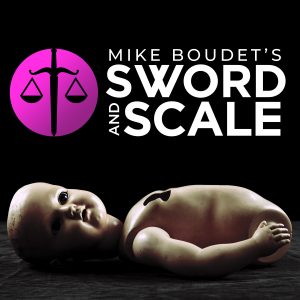 It’s almost impossible to be bored listening to Sword and Scale. It also can elicit some less-than-positive reactions. I commented on how I personally like the raw and real nature of it but understand how some listeners could be turned off… particularly when it comes to some of the 911 calls.

Mike continued passionately on the need to tell a “real” story, and how much care they take to respect the victims. While Sword and Scale may not be for everyone, the depth that is taken to tell the story in each episode leaves many listeners with a deep understanding of the case.

Mike knew when he created it that he needed to do something different:

“I needed it at that point of my life,” Mike said as he segued back to the birth of Sword and Scale. He even recalls the actual day when it was born in his mind: “October 29, 2013. It was my birthday, and I remember it like it was yesterday. I knew immediately that [Sword and Scale] was what I had to do, and I got started right away.

“I was sitting on my back porch with an adult beverage. I was alone and in a dark place in my life, thinking ‘I have to do something.’ And that’s when I realized that I love true crime. I had been watching true-crime TV shows my entire life. I also love talk radio. I love podcasts. It hit me that one night, and everything just clicked.”

As two guys who love the true-crime category, we pontificated as to why some people absolutely gravitate to the genre. “I’ve thought about this a lot,” Mike admitted. “When I interact with fans, I ask them, ‘Why are you interested in this topic?’”

He dug in a little deeper into the psyche of the true-crime fan by sharing the demographics of Sword-and-Scale listeners. “Our audience is well over 70% female. The true-crime audience is highly skewed female, college-educated, between the ages of 25 and 45. Guys who are into True Crime are a rarity. That alone is interesting to me. For me, whether it was watching Forensic Files, American Greed, or Dateline, it was almost like a comforting, warm blanket. I don’t know why. Maybe it was just the pace, the tone, the narration, and the storytelling. But there was also something a little deeper there about the idea that society works. That at the end, the bad guy goes to jail. I don’t know. That’s a very philosophical question.”

One question that isn’t nearly as deep is why Sword and Scale is found under the History Category, and not True Crime, on Apple Podcasts. “We know certain things about the algorithm,” Mike confessed. “First of all, they highlight new shows. They push all the newer podcasts. If you have a brand-new podcast, it shoots right up. It’s a formula.

“There’s a secondary formula, and that is they boost certain categories above others artificially,” Mike explained. “If you have 500,000 listeners, your ranking will be higher in the History Category than in the True Crime Category. We’ve seen this again and again. Apple isn’t our employer. They don’t regulate what we do. They’re a corporation that makes money off of the hard work of all of the creators in the podcast space, including myself. You can switch up your RSS feed anytime and do what you want with it. We’re not doing anything wrong. We’re just switching categories.”

“So, we’re a history podcast,” Mike smiled like a kid who just took an extra piece of candy.

One thing no one needs to apologize for is enjoying Sword and Scale. For many true-crime fans, it continues to be one of their primary go-to podcasts, and rightfully so.