Blake and Spencer Get Jumped is a podcast about anime.

Anime? What exactly is it, and why is it so popular?

Anime is Japanese animation characterized by a distinctive look, feel, and method of storytelling. It’s been around for over a hundred years and is popular all over the world with children and adults alike. Anime describes not a genre, per se, but the method in which the material is produced. While it started as a hand-drawn medium, it is now more and more frequently produced by computer generation (CG).

In the early 1960s, the first television show using anime debuted, featuring the robot Astro Boy. His large doe eyes are the exact type now regularly associated with Japanese anime, which are loosely based on the eyes of Bugs Bunny and Mickey Mouse. Modern cartoonists thought such eyes would be more commercial, and children definitely seem drawn to them (adults are generally more intrigued by the varied storylines).

“The real beauty of anime is in its simplistic storytelling,” says Spencer Miller, co-host of the Blake and Spencer Get Jumped podcast.

Speaking to its popularity, Spencer says:

“People are sometimes into anime without even knowing it! Like those who grew up watching and loving Pokemon. Many don’t realize it’s anime, because they’re so used to it being part of the American cartoon landscape.”

Playing off the popularity and the love of all things anime, Spencer and friend Blake Dorris began the podcast in 2017, and have since released more than 200 episodes. Although it started as a weekly podcast, the guys recently moved to twice a week. They have also partnered with the Geekly Grind, a new podcast network created specifically for anime, video games, and other “geek-centric” news. The partnership brought an additional weekly podcast into Spencer and Blake’s mix, and in it, the pair covers news and new anime podcasts.

The roots of Blake and Spencer Get Jumped were formed at the University of Memphis, where the pair met. As it turns out, both were theater majors, and Blake ended up auditioning for a theater production Spencer was directing. Their initial bond was formed over a “nerdy” card game called Magic: The Gathering. Who knew their meeting would be so fortuitous for the both of them? 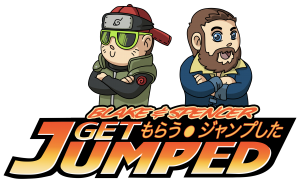 After college, the guys lost touch, later reconnecting in Chicago. When relocations sent them in separate directions, they began talking about the podcast as a way to stay in touch and keep the friendship going. And so they did.

Because Blake and Spencer were both huge fans of Jay & Miles X-Plain the X-Men podcast, they decided to model their podcast after it.

“It was also important to us that the podcast be just two friends talking about an anime show,” Blake explains. “If our listeners are into anime, but their friends are not, they could now listen in on the conversations we recorded every week. We also wanted to make sure we talked about it in such a way that if the listener hadn’t actually watched the show featured in the episode, he or she could still get into it.”

They also knew from the start that it would be geared toward an older audience, because Japanese culture has a very different viewpoint on adult themes than we are used to in America. Therefore, the shows are usually rated—especially in the western world.

“It is an explicit podcast, so we do curse on the show and sometimes discuss sexual material and topics” explains Spencer. This is true to the nature of anime: the storylines can be very sexual, largely due to the fact that nudity and sexuality are regarded much more casually in Japanese culture.

For Spencer and Blake, podcasting has been personally rewarding. “First and foremost,” Spencer remarks, “It’s given us a deep understanding of and love for the creation of this medium.”

Blake and Spencer Get Jumped is beautifully edited and engineered by their “third partner,” Rashad English, who is instrumental in the overall success of the podcast.

Named by Feedspot as one of the top three anime podcasts in 2021, the future is jumping for this podcast. Fueled by their love of anime, Blake and Spencer will continue to bring listeners the newest anime podcast news and updates on their shows. Way to go, guys!

UTR: On The Bench