Sometimes the best “juicy scoops” in Heather McDonald’s hit podcast are the one’s about her own life as a mom, wife, and standup comic. “Oh, there’s nothing that I haven’t shared,” she says. And for the rest, there’s always Desperate Housewives, Bachelorettes, Lori Loughlin, or Megan Markle.

Raw, spontaneous and unfiltered, Heather’s loyal listeners hang on her every word – and follow her to her live standup gigs.

“I never ever miss an episode,” I hear a young woman say breathlessly to her friends at a nearby table at Washington DC’s City Winery where McDonald is poised to take the stage for 90 minutes of hilarious stories, celebrity gossip, and her “Barbie” impressions of the Real Housewives.

The women are giggling and one-upping each other as they share anecdotes from their favorite Juicy Scoop episodes.  “I’m lost without it,” says another. “She’s so real, authentic. I love her.”

McDonald turned to podcasting in 2015 when her Hollywood acting, writing and producing gigs started drying up.

“I literally said, ‘Well I don’t have anything going on in TV, I guess it’s time for a podcast’,” says McDonald, who wrote, produced and appeared regularly on E’s Chelsea Lately for its entire 7-year run, and along the way honed her standup and starred her own hit Showtime special, I Don’t Mean to Brag.

“I didn’t know of anyone making any money in podcasting, and I go, ‘Oh well, who cares if don’t make any money. This will give me something to look forward to every Monday’.”

And more than something she can look forward to, The Juicy Scoop podcast has become a spontaneous ‘writing room’ to test out, practice, and hone the material that often ends up in her standup.

“The whole reason I started doing the podcast is that I knew it would help to sell my live standup shows. And it really did. And then I realized I really liked it.”

“She was a real nightmare, just crazy,” says McDonald. “She was threatening me, saying, ‘I’m going to tell everybody I’m going to go to E! News or something’. Now, I’m not Meghan Markle, but she was basically like a Samantha Markle, okay, coming after me.” 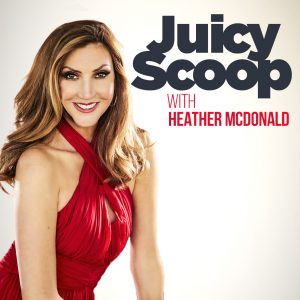 McDonald decided to tell the whole story from beginning to end. “I’m going to get the people hooked so that they keep coming back and listen to my podcast. And that’s exactly what happened.”

Her raw authenticity has endeared her to her viral fanbase, who tune in to hear her share without shame the dysfunctional dynamics of her Irish Catholic family, an argument with a girlfriend, or what she calls the “not great moments” in her 19-year-old marriage.

“It’s nice to know that there is no secret in my life that someone could reveal or screw me or whatever.”

Her 3 kids are also rich material for her podcast, along with the hilarious observations about reality stars, celebrities, and the sort of stupid criminals that end up on Dateline.  “It’s not as profitable to have boys and exploit them. Kris Jenner put them all in bikinis and look at them now!”

McDonald was only 6 when she discovered her true destiny.

“It’s possible to make someone laugh on their very worst day. That’s what I want in life.”

As a little girl, McDonald had been watching a call-in show with Eddie Murphy when a mom called in.

“She’s like, ‘My son died a couple of years ago, and the day he died I said, I’ll never laugh again.’ And that night she turned on Saturday Night Live and saw Eddie Murphy being Gumby… and she laughed.”

Some 400+ episodes in, McDonald says podcasting has enabled “the most overwhelming response” with story after story from people finding solace from painful moments in their lives in her comedy riffs and all those “juicy scoops”.

“They come up to me after my shows,” says McDonald, “sharing stories of tragedy and hardship and how my podcast gave solace.”

There was the mom in Boston, she says, who had to drive 5 hours every day to get her young son to treatment for his leukemia, now in remission.  “She came to me and she goes, ‘We listen to The Juicy Scoop, now he still gets in the car and he’s like, Mommy, what’s the Juicy Scoop?”

McDonald has also turned her fans and friends into correspondents, crowdsourcing her podcast with their own tips and scoops.

She says she’s “obsessed” with the college admissions scandal – “I like to remember where I was the day it broke” – McDonald uses a tip from a California friend in her 90-minute standup gig.

“She said FBI trucks are like coming on lawns and people are getting arrested at Trader Joe’s, and I called her and she’s like, ‘It’s a greatest day of my life. I hate these assholes.’ I was like, ‘Oh, amazing, just bring me any inside juicy scoop you can get.’ So sure enough, a few days later she did some investigative work, and she’s like, ‘OMG this singer guy was the ringleader… and a single mom didn’t have the money like the rest of the people in that neighborhood, and the rumor is allegedly that she apparently was sleeping with the singer guy to get her kid into college.’

McDonald says the key to success in podcasting is to be consistent, don’t skip weeks, and publish on a consistent schedule. “I treat Juicy Scoop the way I treated Chelsea Lately, a TV show.  I think that’s why the most successful podcasters came from journalism, TV or strong comedy backgrounds.”

Complimented as much for her interviewing skills as her spontaneous and unfiltered riffs, McDonald also advises: “Make sure you’re excited to do it and it’s something that will enrich you and your listeners’ lives, and do it for as long as you’re feeling it.”

McDonald is “feeling it” and her enthusiasm, energy and quick wit is proving addictive.