World Series Champion Jim Leyritz is a true champion on and off the field.

Jim’s first love was basketball. He wanted to play at the next level, but his father “had a talk with him,” letting his son know he might have a chance to play baseball professionally.

In fact, Jim went on to set himself up as the number one pick in the baseball draft. But then, he fractured his foot while playing tennis, which caused the Atlanta Braves to pass on him. Jim did not get drafted until he changed his position to catcher. Then, he immediately signed with the New York Yankees, despite having never been a personal fan of the team, because they guaranteed to pay his college tuition.

Throughout his career, Jim has learned from the best. He shared this funny story about George Steinbrenner:

While attending a basketball game at the University of Florida, Jim approached George to say “hello,” adding, “I cannot wait to play for you one day. I am one of your minor leaguers.” In 1990, he had a pinch-hit walk off of Roger Clemens. After the game, Jim found champagne in his locker with a note from George that read, “Congrats on getting a base hit, kid. You said you were going to make it.”

Jim was one of the first of pieces of the Yankees’ dynasty. 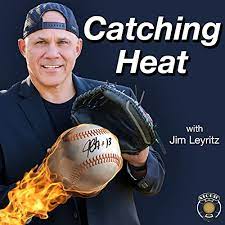 When George was suspended, the Yankees’ General Manager Gene Michael let Jim know that the door for minor leaguers to join the team was open.

“Gene had free rein to do what he wanted to do. But I learned what I needed to know to be a New York Yankee—what it meant to be a part of the organization—from the manager, Buck Showalter.

“I remember taking the 4 train to the ballpark and walking right in the back entrance. I saw the statues of Babe Ruth and Lou Gehrig.”

It was there that he also got advice from a legend of the game… Pete Rose.

“He told me when I was a 14-year-old kid how important it is to work so hard. He said, ‘I would make the same effort in spring training batting practice as I would in the playoffs.’”

Jim shared two of his favorite moments playing for the Yankees:

First, his 15th inning playoff walk-off homerun, and second, his homerun off of Mark Wolhers in the 1996 World Series, which they went on to win (this helped begin the Yankees’ new dynasty).

Life after baseball was not a difficult transition for Jim. He began working for MLB.com Internet radio station from his house with Billy Sample as his co-host. He was a very successful ESPN analyst.

However, things took a turn for the worse when he was involved in a tragic car accident. Alcohol was involved on the parts of both drivers, and the woman who hit Jim lost her life.

Jim then endured a three-year battle to be vindicated on all charges besides the DUI.

This was a turning point, and Jim became a spokesperson for charity events.

He also continues to make personal appearances for the Yankees to sign autographs for fans.

When someone approached Jim with the idea of his hosting a sports podcast, he had a better idea:

“I want to take former athletes, celebrities, and entrepreneurs who have maybe fallen from Grace or left their career to do amazing things like charity work and service,” he said.

And so he does, with the Catching Heat with Jim Leyritz podcast.

Jim points to his interview with Mariano Rivera as an example of a story that blew him away. “No one knows his story,” he explained. “He is building churches and giving away backpacks.”

These are the types of stories Jim wants to tell… the real ones that can’t be found in the newspaper or on television. So far, he has interviewed the likes of Daryl Strawberry, Nick Totero, and Sid Rosenberg to do so.

Although Jim hopes to have a studio of his own one day, he currently records out of his home using Zoom Video and a camera. He has released 22 episodes as of the time of this writing.

Referring to podcasting as “an opportunity to meet great people,” Jim’s goal is to simply reach people.

“If I reach that one person who needs a kick that will help him in life, it will be worth it,” he said.

Jim is dedicated to helping and motivating others and is clearly accomplishing his mission to pay it forward.