Ralph Sampson is a gentle giant among men.

He took his love of competition to the NBA, and coupled with his off-field success, it’s clear he has successfully reached his full potential.

Growing up, Ralph grew two or three inches every year. His doctor reassured him that there was nothing wrong, so Ralph embraced his height, rather than feeling embarrassed by it.

He loved playing outside and enjoyed every sport. “In my time, we played a variety of sports we did not specialize in,” he said.

In middle school and early high school, Ralph decided to focus on basketball, recognizing that it was his best chance at going pro.

Ralph had a full four inches on the seven-foot players in the NBA. Plus, he was very mobile and fast. Always a hard worker, he honed his skills at camps and by playing for leagues when he wasn’t in school.

In high school, he was the best player on his team, though “I never thought about breaking records,” he said. He was hard on himself, and ever humble—never did he play for the highlights. Rather, it was all about the team.  “Teamwork makes the dream work,” he said.

Ralph received over 1000 letters from colleges interested in recruiting him. He narrowed the list down to his top four choices—Virginia Tech, North Carolina, Kentucky, and Virginia—ultimately choosing Virginia, since it was close to home. His parents, who he said, “keep me grounded,” taught him the importance of education, and he knew Virginia was a great educational institution, as well. 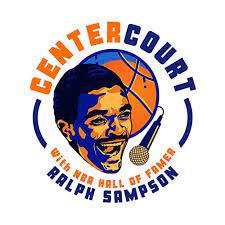 Ralph stayed in VA for four years and earned his degree in communications and business. Reflecting, he is glad he didn’t leave early, as he felt it helped prepare him for life after basketball. He also truly enjoyed the camaraderie of college. He made a lot of friends, especially in his teammates.

“College was the best time of my life,” he said.

Ralph had a tremendous career at UVA, and they retired his number—50.

As the number-one pick in the NBA draft, Ralph felt no weight on his shoulders at all with the accompanying responsibility.

He went on to become a four-time NBA all-star and played in the NBA finals with the Houston Rockets.

Life after basketball was a bit of a challenge in terms of figuring out what he wanted to do. But as a student of the game, he used what he learned in sports to become successful in business.

After studying business, he opened a tee-shirt shop. He also had a 20-year real estate run and made various business deals—including owning a restaurant in Charlottesville called American Tap House. “We have a great atmosphere, great food, and great drinks,” he said. (You can check it out here: americantaphouse.com.)

Having done radio shows, Ralph eventually began considering podcasting, which was a natural fit. “I am a communications major, remember, so I know how to be on the radio,” he said.

Ralph’s podcast—which he takes as seriously as he does any venture—is about life in connection with sports. He interviews a lot of notable people, like Brian McKnight.

Ralph and his hand-picked co-host, Mike McDonald (who Ralph says is “the best” and has been in the radio business for 30 years), are now approaching their 100th show.

He prepares for his podcast like he does for any venture—he studies. He hopes to one day take the show on the road and record at his restaurant.

Ralph has accomplished so many things; however, he remains humble, crediting his success in growing a tremendous brand and legacy to his parents, teammates, mentors, and employees.