Many sports fans know the story of Daniel Rudy Ruettiger, including how he was the first football player to be carried off the field at Notre Dame in 1975. Standing at only five foot six, Rudy had always dreamed of playing for Notre Dame.

For the first time in this exclusive interview, Rudy shared his story of overcoming obstacles, playing for Notre Dame, and how his life experiences molded him into the person he is today.

“Football was my salvation in high school,” Rudy explained. Despite his dream, he never believed he was smart enough to make it to Notre Dame—the elite of higher education. But he was determined and persistent.

As an underdog, Rudy was driven to enroll in his dream university any way he could. He started off taking classes at Holy Cross Junior College, with the hope of transferring. During his time there, Ruettiger finally learned he had dyslexia, which explained his long-time struggle in school. Notre Dame rejected Ruettiger’s applications, but he didn’t give up. He took a groundskeeper job on campus, and after investing more hard work, he applied one last time… and was accepted! 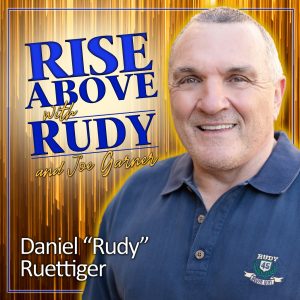 Ruettiger’s dream came true in 1975, when he suited up and played for 27 glorious seconds in a game against Georgia Tech. He executed three plays—a kickoff, an incomplete pass, and in the game’s final play, the sacking of Georgia’s quarterback Rudy Allen. He was then carried off the field by his teammates, a first in Notre Dame history.

“I always wanted to be part of something that means something, because that would mean I’M somebody,” Ruettinger reflected. After filming the movie, Rudy continued to share his story. Currently, he is a motivational speaker who speaks to audiences about his experience in overcoming obstacles to drive home the message of hope.

He is also an author. His book, Rudy, an autobiography that takes the reader behind the scenes to experience the heartache, triumph, and glory of Rudy’s life through his own eyes, was released in 2011. It also details the ten years it took to get the movie made.

Rudy also now hosts his own podcast, Rise Above With Rudy, through which he continues to deliver his message of hope, perseverance, and self-reliance by sharing the amazing and inspiring true stories of everyday people as well as former athletes who have beaten the odds by choosing courage over adversity. He loves featuring guests who have made a difference in their own lives as well as the lives of others. Periodically, Rudy will also feature celebrities and pro athletes who share their own “Rudy stories.”

Unlike most self-improvement podcasts, Rudy’s is truly entertaining despite the “seriousness” of the topics he covers: how to be a leader, how to be unstoppable, and how to overcome, to name a few. The underlying theme of every episode is constant: giving up is never an option. There is always hope, and we should always chase our dreams.

Rise Above With Rudy touches people of all ages, young and old. “We relate to everyone,” Ruettinger said, “because we bring it down to common sense.” Not only that, but Rudy goes the extra mile to support and act as a role model to young athletes.

When he heard about a young girl from Louisiana feeling down about being benched by her basketball coach, Rudy gave her a call. His pep talk included advice about how she should really thank her coach for benching her, because he was actually preparing her for the real world by helping her build her character, learning to be a team player, and most of all, to never give up.

If you’d like to hear amazing stories that will inspire you to never lose hope, check out Rise Above With Rudy.