Growing up in a “sports family,” Tracy has always had a love of athletics.

“I’ve been a sports fan since I was a little girl,” she said. “One day, a female family friend of ours told me I was the Laker’s good luck charm, because I was in the room when they started winning. That’s when I got really into sports.”

When it came time for college, Tracy wanted the “full college experience,” ultimately choosing a school that had a robust sports program and was far from home—the University of Michigan. She studied English Literature and began writing sports for The Michigan Daily. She also interned at Fox Sports during her summer breaks and after school.

Later on in her career, Tracy was working at a political and philanthropic donor advising firm when she decided to start a blog about the San Francisco 49ers just for fun. Within just a year, the 49ers began to credential her, and she’s been creating content catered to women who love sports ever since. 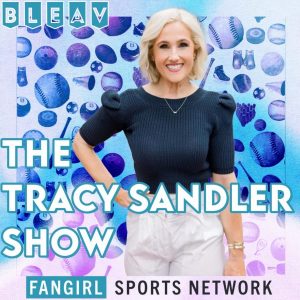 “The blog was called ‘The Trials and Tribulations of My Love-Hate Relationship with the San Francisco 49ers,’” said Tracy. “People read it… not a ton of people, but a lot. So, I decided to turn it into a business.”

Tracy was determined to create a place for female fans to get content that spoke directly to them. She created a website, hired a professional to design a logo, and began writing during the week.

“There is nothing wrong with being a ‘fan girl.’ The best compliment I’ve gotten was from someone who said I took that phrase from having a somewhat negative connotation and turned it into a very positive connotation that empowers women who love sports,” said Tracy.

Creating content that is catered to women entails going beyond the field. Tracy merges in lifestyle content, as well, highlighting athletes’ work in the community.

She also hosts two podcasts: Get My Job highlights women in sports and their journeys, and The Tracy Sandler Show covers sports, related top headlines, and lifestyle.

“I think the goal in podcasting is for your listeners to feel like they are engaged in a conversation with the person you’re interviewing,” said Tracy. That’s one of the reasons Tracy sends her guests a pre-interview questionnaire:

“Not for them to send back, but to give them an idea of the types of high-level questions I’m going to ask.” Tracy explained. “I love podcasts. When I’m listening, I want to be engaged and feel like I’m learning something.”

Through The Tracy Sandler Show, which has only been out for less than a week at the time of this writing, Tracy gets to play around with some new ideas—like asking her listeners what they want to hear her talk about and which questions they have, so she can answer them. From a research perspective, getting to know the audience is essential for Tracy, as it gives her an idea of the type of content her listeners are looking for and makes them feel included and engaged. “I want them to laugh and feel informed or inspired,” she said.

She uses different platforms for different content, directing her audience toward certain social media sites to stay up to date on everything going on.

“On a game day, for instance, I drive people to my Instagram for the pre-game. During the game, I live-tweet the game, and post-game, I tweet the main points from the press conferences and videos. That also goes to my Instagram. I drive to different platforms for different areas because I know that’s what people like,” she said.

For Fangirl Sports Network, social media is everything. As a podcaster, Tracy feels it is so important for her viewers to be able to view and interact with her social networks to get to know her, her point of view, and what she’s interested in. She also shares news about her upcoming shows and the topics she’s covering, further engaging her listeners.

As a successful writer, blogger, and podcaster, Tracy has found her niche in sports content for women. She truly understands how to engage her audience and run a successful network.