Spending your time interviewing people who live within the dark side of the Web could easily turn you into a cynic or closed-off person who doesn’t interact with people and approaches every request with the jaded eye of someone who has seen it all and perhaps wishes he hadn’t. Or not.

Jack Rhysider is the founder and host of the top-rated technology podcast, Darknet Diaries. If you haven’t listened yet, don’t bother doing a lot of research about the host or looking for photos. Like the singer Sia, Jack keeps his identity hidden.

When you play in the world of the dark side of the Internet, you need to be careful about your privacy. After a fanatical fan tracked Jack down from a video he posted by triangulating his location and looking up information in public records, even posting on social media became a dangerous proposition. (Yes, that can be done quite readily by those in the know.)

So then what makes Jack choose to spend his time talking to some of the most infamous players on the darknet? Why does he have a fascination for what drives them to do what they do?

Jack started his tech career in the world of cybersecurity, but didn’t love it. He wanted to go deeper into what drove the people he was protecting his clients from. He also didn’t want to work for anyone else. That was the beginning of Darknet Diaries.

Research became Jack’s friend as he took a deep dive into the world of podcasting to learn his new craft—including studying how to tell an audio story—because as a fan of This American Life, Jack says, “Story is everything.” He quickly turned his show into a thriving business. Nine months after starting Darknet Diaries, Jack was burned out, and he quit his day job. Just four months later, he started making money from the show. Now, he earns as much from it as he did as a network security engineer, which is pretty much unheard of in the independent podcasting world. Marketing and storytelling masters will salivate knowing Jack earns an income doing what he loves and using the strategies he learned from reading and studying books like Make Noise and Out on the Wire. 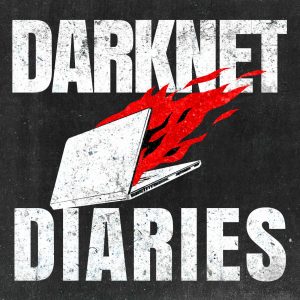 And his listeners clearly appreciate his passion for storytelling and attention to detail when it comes to getting the facts right. In fact, fans approached him wanting to give him “fistfuls of dollars” to support his show. Accustomed to income from sponsorships only, Jack struggled to accept their generosity, but eventually, he opted to open a Patreon page. And unlike the dark side of the web he profiles and the secrecy around his appearance, Jack is all about transparency in his business: his website even includes the number of fans who pay for access in order to support his work and enable him to continue publishing episodes.

Jack credits his fans with carrying him through and giving him “fuel to go to the moon.” Likewise, one fan wrote him a two-page email about how his show changed her life.

Jack works hard to ensure he is making an impact. Each episode takes up to 30 hours to research, produce, and publish. Some of his guests have taken a year or more to lock in, but Jack points to persistence as one of the keys to his success. Another is his own interest in his show. He still gets “goosebumps” during interviews.

Teaching others is the foundational piece of every episode. Jack feels he is not just “reporting news, but teaching” others about a world they need to become familiar with in a way that makes it understandable. “There’s something great about just giving people the gift of knowledge and showing them what could go wrong in a situation.”

Every episode of Darknet Diaries is a “true story, not a 10,000-foot hypothetical idea,” Jack said. And while he could teach the concepts shared inside his show at a college, he prefers to teach 200,000 listeners at a time with his podcast.

Jack has interviewed numerous people from NSA and Israel’s intelligence unit, and hopes to someday get more foreign intelligence agencies to talk, such as Russia, China, or Iranian nation state hackers. They tend to be more secretive and harder to get to interview. They don’t want to talk about what they are doing or why they did what they did perhaps for fear of repercussion, or because they aren’t driven by the same motivations as other hackers. Jack is determined to find someone who is willing to talk, because he knows there are powerful stories to tell from their perspective.

Darknet Diaries has won several awards and been profiled in the New York Times Sunday paper, yet he is looking forward to putting his copy of this article among them, because “his listeners are everything” to him.

Leveling Up Your Podcast