Like many women in the industry, Espree prefers the reference to being a female be dropped altogether. After all, no one says “man in tech.”

Espree started her first company in her teens and hasn’t stopped since. She is passionate about tech—especially tech startups (and even more especially, tech startups founded by women!)—and thanks to her dad, she’s been involved in it since she was a little kid. She loves to give voice to women on the forefront of technology and business, and her Women in Tech and We Are LA Tech Podcasts consistently rank at the top of the charts. For Espree, podcasting is “painting audio”… and a way to connect listeners to new ideas, interesting people, and the world around them.

COVID has reduced this world traveler, who has visited over 100 countries and counting, to recording her shows alone in the studio. To quench her thirst for interaction, she now regularly moderates rooms on Clubhouse. (If you have been using Clubhouse, you might recognize her as one of the “faces” of the Clubhouse app. Her rooms are another way her spirit gets to soar while serving others.)

When I asked Espree how she got into tech and created the companies she did, she said, “I have a lot of belief in the unimaginable and a lot of hustle. I create my own reality. I go after life, whatever that means to me in each chapter, with all my being.” True to her name, which means “spirit,” Espree is the living embodiment of a spirit who lifts others up with everything she strives to do. 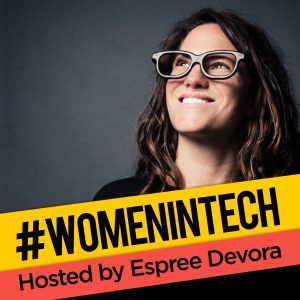 One of the first things that came up during our interview was her Zoom profile photo. It portrays a woman stepped fully into her power—one who is loving life and unashamed to show the world who she really is. When I commented on it, Espree was appreciative. She shared about how the day it was taken was a particularly hard one, and she hadn’t wanted to show up to the event. That led our conversation to what it means to be a founder of a company.

“The definition of being a ‘founder’ is showing up on the days when you just don’t think you can show up anymore,” says Espree. “Being a creative and community builder is difficult. It is not like what you see on TV or in the movies. Startups are hard.”

While Espree knows exactly how hard it is, she also knows if she can do it, so can you. This is another characteristic of being a founder… or better yet, leader… and Espree is one with massive influence.

In fact, I used to think the word “influencer” was a dirty word. It conjured up visions of people who claim they are in business to help others build something, but who are really only about making themselves look good. That is, until I met Espree. Through podcasting, speaking, Clubhouse rooms, and more, she has become a media influencer whose every conversation is designed to help others achieve their wildest dreams. She does it with style, grace, some tough love, a little bit of skateboarding, and lots of sneaker-wearing.

Her latest project is one you might not expect: herself. She is learning to prioritize her own needs while elevating others—not an easy project for someone who, like the Energizer Bunny, keeps on going and going. When I asked her what gives her joy, she said, “My Spanish lessons.” And again, because she is so dedicated to serving and elevating others, she even has a Clubhouse room where people drop in to practice their Spanish!

Like many superheroes, Espree has an origin story that created her drive to be a founder (and yes, the distinction between entrepreneur and founder is important). She remembers walking with her dad in Westwood Village, Los Angeles, as a little girl. They were headed to the movies when she saw a building with empty spaces. Walking past it, she looked through the glass and said, “That could be a tee-shirt company. It could sell things from my favorite cartoons.”

Reflecting, Espree says, “I remember that moment so clearly—how we were standing, and even how my head was tilted. I talked about how the shirts would look and everything.”

Although Espree thought it bizarre to remember that level of detail, I wasn’t surprised. Every true seeker and achiever can describe the moment when her passion became seated in her soul. For Espree, it was that moment with her father that she saw the possibility of an empty storefront. And thanks to her mom believing that Espree could do anything she set her mind to, and teaching her that “every ‘no’ is one step closer to a ‘yes,’” the trailblazer that is Espree was able to soar.

Today, through her podcasts, speaking gigs, and Clubhouse rooms, she helps others see the moments when the empty office space in their dreams became their founder story… and then, she shows them how to “get it done.”