Is the world predominantly good with pockets of evil, or evil with sprinkles of good here and there? I’m just a civilian, but with the work I do in the law-enforcement community coupled with all of the true crime I cover for Podcast Magazine®, I find myself asking myself that question more often.

I asked Anna-Sigga Nicolazzi, former homicide prosecutor and co-host of Anatomy of Murder, to weigh in (be sure to read to the end to get her response).

When I began my conversation with Anna-Sigga, who launched her show in October 2020, I mentioned how much I enjoyed the episode I had just listened to and, half-jokingly, said I was also depressed.

“That is not the goal,” she laughed. “At the same time, it made you feel, and that’s important. I think it’s important to remember that these aren’t just stories. They’re real-life events.”

To that end, I mentioned that it is my belief that most true-crime podcasts aren’t simply entertainment. They provide a service to society by keeping many cases alive.

“I appreciate your perspective,” replied Anna-Sigga. “If I thought true-crime podcasts were just entertainment, I would have never entered this world, because I wear that former-prosecutor ‘hat.’ So I have to feel good about it from that perspective.”

“I am a former prosecutor in everything I do. That is my true passion. I actually thought I would retire being a prosecutor. After 21 years, 16 of those in homicide, it weighed heavily.”

Anna-Sigga went on to talk about how much she enjoys the true-crime podcasting space. In essence, she is able to apply her unique talents to a passion that is far less stressful than being a top-notch prosecutor.

Anna-Sigga and co-host Scott Weinberger, a former Deputy Sheriff, do a splendid job of covering a case from multiple angles. The commentary and insights they bring to each episode is thoroughly enjoyable.

It would seem that, after decades of hearing and viewing details of many gruesome and harrowing cases, not much would disturb them… but it still happens, on occasion. 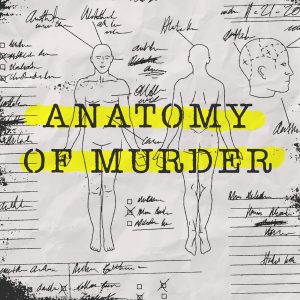 We discussed one particular case involving a home invasion covered in an episode called “The Evil That Lurks,” aired on October 28, 2021. Anna-Sigga was unnerved by the victim’s account, commenting how being taken aback by the details of a crime doesn’t “happen that often”:

“I remember where I was and where I was sitting when I had to turn off that interview. Sometimes, as much as I know these are real-life events, and I look at them all from that perspective, someone describes a case in a particular way that puts you there. That [specific case] was someone literally being taken out of their home while their child slept and exposed to the worst that humanity has to offer. There was just something about that. Certain cases shake you literally to the core, and that was one of them.”

While I am pleased Anna-Sigga is not often shaken that way, as we might not have Anatomy of Murder, it speaks to the human nature of covering these cases. Sometimes, empathy fatigue, a term many first responders use, sets in.

Luckily, Anna-Sigga said, “This is a world I am strangely comfortable in. While it is as horrible as it is, you can’t do this type of work if you’re not. I am used to hearing about many scenarios.”

Anna-Sigga recalled an instance when a fellow lawyer she was having lunch with asked her to put some clearly visible crime-scene photos away.

“As a prosecutor, it doesn’t faze you as much,” she continued. “It’s part of my world. It’s my evidence. It’s what I have to figure out, so I study them all the time. I think we all have things we are built to do, and this is it for me. I don’t know what that says about my brain.”

Given her talents and background, I wondered what attracted Anna-Sigga to co-host Anatomy of Murder. She pointed to her working relationship with Scott, who she worked with on the TV series, True Conviction.

“There are certain people you just click with, and Scott and I clicked quite quickly,” she explained. “I felt he had integrity, and that matters a lot to me. He also got it. He got that I cared more about the case than how it appeared. I want to know that if the family members of that victim are in the audience, they are okay with the way I’m talking about it. And he got that.”

It’s that camaraderie and back-and-forth between co-hosts that makes Anatomy of Murder just a little different and, quite frankly, special. “It’s a good exchange of ideas,” Anna-Sigga commented. “We often agree, but not always. I think that’s interesting, too. There are plenty of detectives I am close to and I trust. There have been many intense moments in my office when they wanted me to authorize an arrest and I said, ‘No,’ or that I didn’t see something that they thought was so clear-cut. That’s part of the process.”

That periodic disagreement set in mutual respect creates a great chemistry for Anatomy of Murder. “I think our comfort with one another comes across when we’re talking these things through [on the show],” Anna-Sigga surmised. “We both do our own research. Each of us completes an interview during our research. Then we just talk the cases through.”

She went on to give accolades to the editing crew and podcast music, which is something I noticed from the first episode I listened to. Much like a movie soundtrack, the music should add to the experience without the listener even really noticing it. If you make note of the music as a casual viewer, odds are that the soundtrack isn’t very good and detracts from the finished product.

Fortunately, that isn’t the case with this podcast: “The editor who does most of our production was interviewed for an article specifically about Anatomy of Murder,” said Anna-Sigga. “I love what he said, and I got it when I read it. He chooses the music very purposefully, but he doesn’t want you to be focused on it. If you [the listener] are, he hasn’t done his job.”

It seems that everyone is doing their job when it comes to Anatomy of Murder. Simply put, the podcast works. But at the end of the day, it’s about good content, and the co-hosts for this show are the foundation for that good content.

“I know my topic,” Anna-Sigga stated emphatically while referring to her expertise in covering a case. Still, she is quick to give very high praise to the entire team, referring to the work they do as “the magic sauce” of a quality production.

That led me to wonder how the cases for each episode are chosen. I asked if it was a team effort, or if as a former prosecutor, Anna-Sigga spends hours going through research until finding the exact case she wants to cover.

“There’s some truth to that,” Anna-Sigga laughed. “We come at it from different ways. We choose some cases because I literally know the participants. As a former prosecutor, I know a lot of other prosecutors. I know a lot of law enforcement. With that, I hope comes a sense of trust. They know where I’m coming from. They trust that Scott and I are going to care for a case that they care very much about.”

It’s that “insider’s perspective” that Anna-Sigga talks about that makes Anatomy of Murder stand out from many other true-crime podcasts in a very crowded space.

“There are lots of true-crime podcasts with lots of good storytellers and lots of good investigative journalists. And also, a lot of people who come at it with different career bents,” admitted Anna-Sigga. “But I really think it is our knowledge from what we have done over the years and the way we approach the cases [that differentiates us].”

She also talks about the “heart” that goes into each episode—another part of what makes Anatomy of Murder something special:

“I think a lot of people who listen to these cases understand that these are real people, and they feel for them. I want [listeners] to actually feel. I think that’s important. We are listening to stories about incidents that have torn apart people’s lives. I don’t want people to feel sad, but I want them to understand. I want them to have that sense of empathy.”

That brings us full circle on feeling, empathy, and my philosophical question about the world and evil that I mentioned at the beginning of this article. Anna-Sigga’s answer:

“I think the world is generally still a good place. If I felt it was more evil, I think I would lay down on my bed and never get back up.

“Most people are generally good. Seeing that is an important distinction. We’re looking at some of the worst. I deal with some of the worst. But I believe there is so much good around it that it has never made me waiver. I have my moments that I can’t believe a human being can do some of the things that I have seen, and wow, have I seen.”

How Do You Podcast?