Calling all Earth-dwellers currently being stalked by the strange phenomenon called “Coronavirus”… those who are locked in place, crawling the walls…

… THIS is your invitation to escape.

Come, fall through a portal (behind a Burger King) to the magical land of “Foon”—where Chicago improv comedian Arnie Niekamp holds court with a motley crew of monsters, wizards, and adventurers!

Through this portal–where the Wi-Fi signal glimmers to distant lands, and there are no masks, Instacart deliveries, or Zoom video calls to virtually overwhelm you—you enter the tavern of the Vermillion Minotaur.

And that is where you find the magic of delightful comedic escape: a fantastical podcast land where, together with co-hosts Arnie, Adal Rifai, and Matt Young, you can do things like play a variation of football called “Mittens,” complete with contradictory rules, and encounter creatures like “memory gremlins,” “half-dwarves,” and “reverse mermaids.”

Hello from the Magic Tavern is a fantasy comedy serial podcast now in its third season with more than 100,000 downloads (on average) per episode.

Fans follow the improvised antics of the fictionalized Arnie Niekamp, who has always been drawn to comedy, cracking jokes and trying out different forms of self-expression, found his podcasting voice in 2015 when he fell through a dimensional rift in Chicago and landed unceremoniously in Foon.

And there he remains. Having lost all contact with his wife and baby daughter, he and his improv aficionados and co-hosts—a shapeshifter who takes the form of a badger, AKA “Chunt” (Adal Rifai) and a boisterous wizard named “Usidore the Blue” (Matt Young) who is driven by his quest to defeat the villainous “Dark Lord,” and constantly voices it in pompous perfection—interview many magical comedic heroes and nemeses.

“Over the last decade or two, between Harry Potter, Lord of the Rings, and Game of Thrones, a lot of people have been getting more into fantasy. Fantasy was an underserved genre for parody and comedy at the time,” says Niekamp. “There’s so many funny clichés and archetypes in fantasy; I thought it would be fun to play with that.’”

What happens in Foon is almost always entirely improvised with guest characters drawn from the world of Chicago improv, where Niekamp has performed for more than 14 years after discovering his love for the spontaneity of it in college. “It’s much less lonely than writing,” he said. “I love serialized storytelling, so jumping into podcasting was natural.” 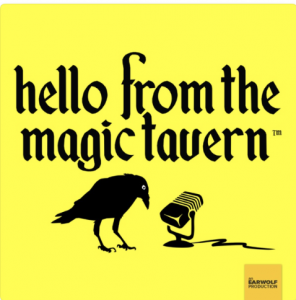 However, he was quick to point out that some of his favorite guests are not necessarily improvisers. Some are “just very good at a certain type of thing, and are game to try something new out. Like the science fiction writer Cory Doctorow. He also writes a lot about what’s going on with the Internet, social media, and online security, He came to us like, ‘I want to be a spider who’s spying on people for the Dark Lord.’”

Niekamp has had the wrestler Colt Cabana and Reply All host Alex Goldman on Hello from the Magic Tavern as well, along with David Plotz, one of the Washington pundits from Slate Political Gabfest.

“I asked David what he thought was funny, and he said, ‘Well, I always thought Dolores Umbridge from Harry Potter was underrated. The people who have to uphold the bureaucracy, who are framed as the bad guys… there’s some part of me that identifies with them more than I’d like to admit.’ So, I was like, ‘Great! You’ll just be a propaganda person for the Dark Lord.’”

The co-hosts impressive dedication to improv—establishing a storyline starting point and “letting riff” from there—is further enhanced by their consistent callbacks to jokes and references from past episodes.

“We don’t try to over-plan things in episodes, because it’s not as fun as discovering what’s going to happen in the moment,” says Niekamp, adding that the six editors on the team are a huge part of the podcast’s success.

“The best episodes are the ones where suddenly, everything you thought you were going to do in that episode gets set aside, because something presented itself that was so fun or silly. The audience and the players are all equally surprised in that moment,” he says.

Hello from the Magic Tavern also draws on Niekamp’s gaming sensibility as one of the creators, directors, and designers for Jackbox Games. Jackbox has been producing irreverent party games since 1995, and is most recognized for its trivia franchise, You Don’t Know Jack, as well as Quiplash, Fibbage, Trivia Murder Party, and more.

Niekamp says there is some crossover between Jackbox Games and the podcast, like in the occasional subtle in-jokes or references to Magic Tavern in games. Fan communities on networks like Reddit sometimes recognize a voice or two, as well.

“Kevin Sciretta, who is the voice of Dripfang, a necromancer on our podcast, was the host of Joke Boat as a sea captain having a nervous breakdown in that game,” Niekamp explained.

All the fantasy-genre spoofing aside, there can be moments in the magical land of Foon that seem a little sad. “For all its lightheartedness, the idea of someone being that far away from his family has a sad underside,” Niekamp says, particularly in light of social distancing and the separation of families and friends during the Coronavirus epidemic.

Yet there is something inherently funny about Foon, and the co-hosts endeavor to make the fantasyland as welcoming as possible with every episode. “Comedy doesn’t always remember to do that, but it was important to us. Even though you’re surrounded by monsters, and murderers, and crazy people, you are welcome.”

Like many podcasters, hosting a show started out as a hobby for Niekamp. Now distributed by Earwolf, Magic Tavern has grown into a money-maker AND a legit side-hustle.

Niekamp says about 70 percent of him feels the joy of having a huge audience and access to opportunities to bring on big name guests. “And then that other 30 percent is like, I now have a part-time job that takes up more and more time, with the bureaucracy of it, the social media side of it… it’s such a big thing!”

With new episodes released every Monday, Hello from the Magic Tavern runs about 100 episodes per season and is now almost 40 episodes into season three.

So, where should a listener begin?

“I think the podcast is at its best if you start at the beginning,” says Niekamp. “We have a far-more-robust-than-average listenership to our back catalog. We can see the numbers coming as a wave from the beginning.”

But, if the rebel in you just won’t allow it, Niekamp recommends “The Skeleton” episode, featuring Chicago improv legend T.J. Jagodowski.

“He’s one of the guys from the Sonic commercials—that’s probably where most people recognize him from. He plays a skeleton who, by day, just hangs out outside of a dungeon and lets people beat him up to sort of warm up for their crawling through the rest of the dungeon. He’s just this really nice, friendly, working-class skeleton,” says Niekamp. “It’s a great one to try out to see if you’d be interested in the podcast.”

The podcast boasts 8,578 five-star reviews on Apple Podcasts. Many of them echo these sentiments from Ariel445: “I just started it over from the beginning for a third time, because it’s that good. Kinda ruined me for every other fantasy/comedy podcast. The content is laugh-out-loud funny…the way they play off each other is the best part.”

Max Temkin, co-creator of the card game Cards Against Humanity, is one of Magic Tavern’s biggest fans, referring to it as “probably my favorite comedy thing happening right now,” thanks to the “special comedy relationship” between Niekamp, Young, and Rifai, “who have the kind of rapport that only comes from a decade of working together,” Temkin wrote in a blog post.

Niekamp and his team have spun off a number of other podcasts as bonus episodes on Stitcher Premium, including Masters of Mayhem, featuring the journey of two of the best characters from Magic Tavern, Dripfang and Baron Lagoon, across yet another magic land.

“Spintax has his own spinoff. We’ve also done a spinoff show where we play Offices & Bosses, a role-playing game in the world of Magic Tavern, where we pretend we work in an office.”

Niekamp says Magic Tavern is about halfway through its lifespan, with about four to six years left.

“We make a lot of jokes about being on TV on the show. We’ll say, ‘Netflix, are you listening?’ and things like that. We’ve come very close to some other big opportunities.”

If you’re looking for a “binge-listen” during lockdown, Hello from the Magic Tavern is a no-brainer.