It all began with Heather Brooker’s desire to connect with other parents and moms in the entertainment industry.

Wife to her husband Chris, mom to their seven-year-old child actor, Channing, and actor herself, she wanted to find a creative outlet to connect with other moms.

“When you’re a mom or parent in the entertainment industry, you don’t get to go to an office and work nine to five. You don’t get to swap stories and commiserate with other parents. It’s just not like that.”

A lover of podcasts, Heather realized she could start one of her own to nurture that need for connection she (and surely other parents in the industry) felt.

“I figured, I’ll just set up my microphone, invite somebody over, have a cup of coffee or glass of wine, and talk about what it’s like to be parents. We could even chat about our favorite movies and TV shows—what we’re watching as actors. We really get excited about that sort of thing! And it just grew from there,” Heather said.

From launching Motherhood in Hollywood five years ago, to booking guests, editing the episodes, building the website, creating social media, and show promotion and publicity, Heather does it all.

“As a mom in Hollywood, my goal was to show that not everybody in Hollywood is A-list. You know, gorgeous, red-carpet ready, the ‘perfect’ mom. We’re just ordinary, average people who have a passion for acting, performing, and telling stories. And we also love our families. So, I wanted to show how it is possible to be a parent, have a family, and pursue your dreams in an industry that isn’t always family friendly.”

When Heather, a big-time goal setter, puts her mind to something, she makes it happen.

“When I moved out to LA, I joined The Groundlings and started performing improv and sketch comedy all over town. And I got an agent, because one of the things I wanted to do was to be on The Office. Within two years of moving here, I booked my first episode on that show, and then, I booked appearances on Grey’s Anatomy and Private Practice, too.”

In addition to acting, Heather said, “I also have a job. I’m a reporter for NBC in Los Angeles. That really came out of creating my podcast.”

Wondering how? When Motherhood in Hollywood started gaining traction on social media (complete with her then two-year-old daughter’s voice in the intro), it really resonated with those around her… like her news director when she was a writer and people from NBC. 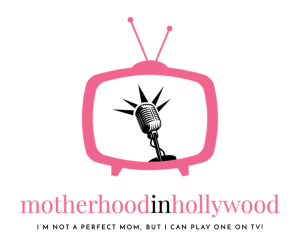 “Many years ago, I traveled all over the world using my journalism degree as a reporter. I went to Africa, the Middle East, Europe, and all over the United States, as well. Telling stories and being a reporter is great, and I really missed the element of making people laugh… of being silly. Now, as a news reporter on crime, I can’t really do that. It’s not really appropriate. So, I decided to let reporting take a backseat, and I became a news writer.”

All of this led to the creation of a new position specifically for Heather at the network, and she became NBC’s first-ever digital entertainment reporter. Since then, she’s carved out a whole niche.

“I was the first person in the LA market to be a digital entertainer and reporter, and definitely the first at NBC LA to do it. Now, I’ve made it my own, and I still have Motherhood in Hollywood! I feel fortunate to have carved out this path for myself, so I can remain in the entertainment industry. Thankfully, I still get to tell stories, share my personality with people, and make people laugh. I can still talk about movies and TV shows, and bring joy to others. It’s challenging to get a steady job doing anything in the entertainment industry, so I feel very lucky.”

Motherhood in Hollywood has grown leaps and bounds since Heather first hooked up a mic to her mac computer, opened up Garage Band, and started texting people to ask if they wanted to “come over and hang out” to record episodes.

Now, about 200 shows later, she has an impressive five-star Apple rating, and gets pitches from publicists pretty regularly.

“They’ll say, ‘I have this client who is a perfect fit for your show,’” Heather said, “And I get to decide if I feel it’s a good fit.”

Heather was quick to point out that despite the name of her podcast, it is not just a show for moms.

“It’s about my story and my journey, and the stories of the cool and interesting people I get to connect with and talk to. It’s really more about entertainment rather than solely parenting; it’s definitely more of an entertainment-driven show. ”

Finally, when it comes to the power of podcasting, Heather has a message to you, my dear reader:

“The thing I love most about podcasting is that you have control. My show is mine. So often in Hollywood, we don’t have any control. So much is up to somebody else to decide—when we speak, what we say, what we get paid, etc. I love the fact that I’m in charge of Motherhood in Hollywood. I decide when I tape my show, who I talk to, and what we talk about… podcasting is very empowering. I cannot reiterate that enough to anybody who is thinking about starting a podcast. Just start.”