Extreme poverty kills millions every year through malnutrition and disease. Although parts of the world are prosperous, such as the United States, a large portion of mankind still live in extreme poverty, including (and surprisingly) many United States citizens.

Healthcare Policy Analyst and Researcher David Introcaso, Ph.D, began hosting The Healthcare Policy Podcast in 2012 because he felt the healthcare policy debate in D.C. was exceptionally narrow. “The debate largely amounts to arguments over coverage and reimbursement,” Introcaso said. “It’s truly remarkable the number of issues that get substantively ignored—for example, extreme poverty.

“In 2018, U.N. Special Rapportuer on Extreme Poverty, Phillip Alston, wrote a report on Extreme Poverty and Human Rights in the United States. He found that over 40 million Americans live in poverty, which is about 14 percent of the population. In addition, the U.S. has the highest youth poverty rate.

“The correlation between poverty and disease, or the social determinants of health, are well documented, but less reported on. The report concludes that the U.S. relies on criminalization to conceal the underlying problem of poverty. Alston characterizes the U.S. criminal justice system as one that is effectively a system for keeping the poor in poverty. The numbers say it all. Again, the U.S. has five percent of the world’s population, yet it currently accounts for over 20 percent of the world’s prisoners, over two million of whom are poor and disproportionately African American and Hispanic.

“Another topic that is largely ignored by our healthcare policy is our climate crisis. To date, I have done 18 interviews on the subject. There is a direct correlation between climate catastrophe and the adverse effects on human health.”

Former U.S. President Barack Obama stated, “The world must come together to confront climate change. There is little scientific dispute that if we do nothing, we will face more drought, famine, and mass displacement that will fuel more conflict for decades.”

In the view of some scientists, and Introcaso, planet Earth is ill. It is running a fever. According to them, the global temperature may be approaching the so-called “tipping point”​—that delicate threshold where a slight rise in temperature may “cause a dramatic change in the environment that itself triggers a far greater increase in global temperatures,” says the British newspaper The Guardian. 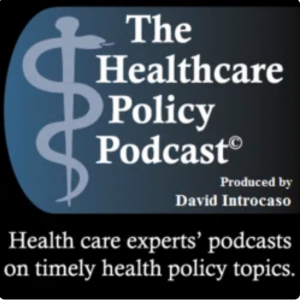 “There are many other topics that I speak about on my podcast, too. Later this year, I will conduct my 250th interview, yet I believe I’ve just begun to scratch the surface. The title of my podcast is intended to be sarcastic. Healthcare in this country is not healthcare; it is medical commerce.”

While not everyone will agree with Introcaso’s view of healthcare in this country, as he says, “Either way, the listener will find the information sobering. When you listen to my show, you’ll see that my interviews are not for the faint-of-heart. That’s why I don’t do anything to market the podcast or promote it on social media. I do not accept any kind of advertising monies.”

Introcaso has been a healthcare policy consultant based in Washington DC for the past 25 years. He served in the Office of the U.S. House of Representatives Majority Leader, Rep. Steny Hoyer. He also spent several years working in the US Department of Health and Human Services, including serving as the Evaluation Officer for the Agency for Healthcare Research and Quality (AHRQ) and as a Public Health Analyst in the Office of Assistant (DHHS) Secretary for Planning and Evaluation (ASPE).

The podcast is intended for anyone interested in healthcare, public health, healthcare research, policy, or the business of healthcare. Listeners include medical students as well as policy individuals in the U.S. and abroad.

“The right to basic healthcare should not be a privilege to be earned. Rather, it should be the right of every citizen,” Introcaso concluded.