When you hear the word “representation,” what comes to mind?

What if I asked you to consider a few more details, and guess the topic of this month’s article? Details like… a Television Producer/Director based in NYC with over 25 years of experience in entertainment… with additional credits that include award-winning documentaries for MTV, and digital content for shows like FX’s The Americans, EMPIRE, and SNL … and films like Primal Fear, Crouching Tiger Hidden Dragon, and Spider-Man: Into the Spider-Verse.

You might think this one’s about casting and getting an agent. It’s not.

It is about a gem of a podcast called Reppin, which is short for “representation.” However, its meaning of representation is a bit deeper.

Hosted and produced by Evelien Kong, whose credits include all those listed above, “Reppin is an outlet where insightful and meaningful conversations take place around representation,” Evelien explained. “What do you represent? What do you stand for? The conversation includes and goes beyond race, gender, and orientation. It’s also about personal representation, and learning about the values and dreams my guests believe in and fight for; the obstacles they have overcome, the lessons they’ve learned, and the space to pay it forward.”

Featuring guests from different backgrounds and professions, from actors in popular television series to leaders in the PR world, each is open and willing to go deep into topics ranging from architecture to education. Some you will know, some you will not. Either way, you can be sure you’ll find out who they really are and what they represent.

Giving voice to underrepresented groups via personal stories and experiences, Reppin explores social issues to promote understanding, inclusion, and empowerment. Evelien strives to ensure the podcast is equal parts entertaining, life-affirming, and celebratory of the BEST of humanity.

“I’ve been extremely concerned with how things are ‘progressing’ in the world—we are arguing facts. We need to go beyond labels and see how each of us has something to offer. This is my effort to make a positive contribution, so that we have a chance to actually listen to one another. It’s about listening to learn vs. listening to respond.”

Working her way up the production ladder, Evelien has been very successful in the production world. She has worked on a variety of different shows, from digital, promos, bonus features, to new media. 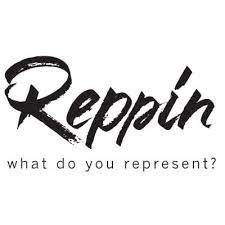 She likes to say she has “bounced around all over the place,” and is very “humbled” to be able to do what she loves: creating.

And while she admits being very new to the podcasting world, she is no novice when it comes to creating content.

“I obviously knew what a podcast was. I didn’t know what to do with one, though, because I was so focused on production, television, digital content, and all the things I was used to doing. But last summer, I came up with this idea to sort of marry multiple ideas I’ve had over the years to give voice to any and all underrepresented groups. I’m very concerned with all of the complexities the world is dealing with right now (and even before the pandemic).”

Speaking to her goal of her show, Evelien said:

“So many of my off-camera conversations were much more interesting than what I was doing on camera. That’s not to say that the my on-camera stuff wasn’t thought-provoking, but it was just very different. I thought it would be so great to be able to provide the audience at home with a sense of who the people I was talking with really are, beyond what you see through a screen… beyond the resumes… beyond the sort of superficial.”

To that end, Evelien provides a more authentic look at, and understanding of, the people behind the talents and insights they bring to their work, so we get a better sense and appreciating of who they really are.

“The best vehicle in terms of learning is storytelling. It’s hearing about other people’s experiences, because you can get so much from that. It’s the easiest and best way to connect on a human level.”

It makes perfect sense—stories bring a voice to the hardships and challenges we’ve faced, and how we overcame them. It helps us understand how we, too, can make a difference.

“We have to learn to actually listen to one another,” Evelien continued, “to start seeing one another for who we really are. In so many conversations, instead of listening, we’re just waiting for an opening to get our point across.”

Evelien’s challenge: to accomplish her goal in a life-affirming way versus a political, heavy-handed way.

“I didn’t want to do anything that would send people running to their therapists. There’s just too much going on in the world today. We’re overloaded. So the trick was to kind of look at all these really important socially enforced issues, but from a slightly different perspective, so it wouldn’t be so overbearing.”

With Evelien’s producer background, her production workflow routine is set: she records for about an hour, and then precisely edits the show down to about 30 minutes.

“I don’t want to fill it with just ‘stuff,’ she said. “I’m always wearing my producer hat. I read as many articles as I can that feature the guest I’m bringing on. I watch past interview clips. I look at their profile IMDB page online. I watch clips of past shows, movie clips, and YouTube clips, and then read their bios. I like to get my hands or any and all information I can about them beforehand, and I take it from there.”

In listening to Reppin, I was struck by the feeling I had of eavesdropping on intimate conversations… almost like being a fly on the wall. The way Evelien talks with her guests seems to put them at ease, inspiring them to share some pretty profound moments in their lives.

Evelien recalled the first guest she ever invited on the show, before there even was a show:

“Angie Thomas. She’s a New York Times best-selling author. I called her up, and I was like ‘Angie, I have nothing to show you. But I have this idea…’ I knew what I wanted the show to be, and asked her if she’d come on. I got an immediate ‘yes,’ and she shared some very personal stories with me.”

Referring to Reppin as a “creative outlet” and “passion project,” Evelien says, “It’s been incredible, to be able to talk to people who are saying, ‘Let’s celebrate our differences!’ I’ve learned a lot about myself and my own journey and experiences, too.”

Which brings us full circle to the title of this article—I commend Evelien for delivering hard-hitting discussions around tough topics in the form of a warm hug.

UTR: Stories From the In Between