“I am here today, fellow riders of the Red Line, to secure your support for transit transition, a railway revolution, a subway secession.”

Take a moment to consider what the alternative universe version of your town and city might be like.

If Boston is your city, you don’t have to imagine. You can just listen in to the Greater Boston podcast to discover what you’re missing.

“Greater Boston is a notoriously difficult show to describe,” said co-creator Jeff Van Dreason. “We struggle with it; our fans struggle with it. And I think the reason is because it encompasses a lot.

“The podcast is about a series of interconnected characters and plots navigating their way through an alternative Boston universe. And there are lots of different things that separate this version of Boston, our version of Boston, from the real version of Boston, but the biggest thing is in ours, the red line, which is one of the four transit lines in Boston, secedes from Boston and becomes its own independent city. It’s its own independent municipality and has elections to create public parks, restaurants, and schools. It’s pretty absurd, but we take it very seriously. And I mean, when I say we take it seriously, we pretend as if this is an actual city, which of course would be impossible. But that’s the main thrust of the show. Through that lens, we are able to explore lots of social issues, and tackle lots of things that we think are important, with a fair bit of humor and whimsey, I would say.”

“I think we do we try to tackle some fairly serious subject matter,” added co-creator Alexander Danner. “But I think we both come from a perspective that humor is a necessary part of dealing with challenging topics, and our topics range from personal tragedies to social injustice and everything in between.

“Plus, there’s a lot of real history in it, too. It does get a little muddy in places, because there’s a lot of our little fantastical elements rooted in very real events. Like in our world, the North End smells like molasses. But that’s because in the real world, there was this huge disaster with a molasses flood that killed 21 people. That’s the real story. In our world, we have slightly sticky streets as a result.”

“Another example is a theme park, Wonderland, that plays a big part in the show. This was an actual theme park, but in our version, it still exists. And a lot of the events kind of lead there. There are just weird things from real-life history that we try to preserve by point 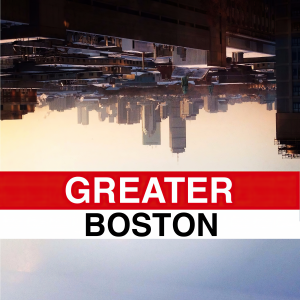 ing them out and saying, ‘God, this is strange,’ because quite frankly, a lot of Boston is strange—a lot of it doesn’t really make a ton of sense. It was designed very early, because it’s one of the first American cities. It’s not like New York City, which exists on a grid thanks to a lot of thought and work. Boston is very chaotic. There are a lot of new and modern things that were just kind of applied to it. So there are many one-way streets, and rotaries, and lots of literal driving around in circles. The trains don’t connect—like, if you want to get from one part of the city to another, in theory, you should be able to take a couple of transit lines to get there quicker. But in Boston, it would actually probably take less time to walk.

“So there are just lots of strange things about it that we’ve had fun exploring. There’s an island, for example, off the coast that used to be a trash island. People would just take their trash there, and so much trash accumulated that the gas caught fire, and the island burned for months at a time. In our version of the story, it’s still burning. So there’s this constantly burning island off the coast. And it’s just weird things like that, that we like to reference to illustrate how strange the real world is. It just feels like a very Boston story to me. I love it so much. Of course, our world is even stranger.”

“A lot of our magical elements are extensions of things that really happened,” Danner added. “Just, you know, exaggerated.”

Danner came up with the idea for Greater Boston while in a fiction group with Van Dreason. Danner was writing micro-fiction pieces while listening to audio dramas when he got the idea to do something larger—to start stitching those micro fiction pieces together. He also decided to rope Van Dreason into the project, which initially didn’t go the way he had planned.

“When I first heard about this, I was very much like, ‘This sounds insane,’” Van Dreason admitted. “Like, I don’t think this is going to work… and what’s a fiction podcast, anyway? I knew about some of them, but they were so niche at that time that I didn’t get it. The pieces he was bringing, and I think this is still reflected in the podcast, especially in the first season, were so disparate from one another. I had a hard time wrapping my head around what he was trying to do. But eventually, it obviously worked. I got to a certain point when he was workshopping this stuff to say, ‘Oh, this is actually really interesting.’ And I was making suggestions about where characters and storylines could go. And then I said, ‘Hey, maybe I’ll write an episode.’ And that’s how I kind of got roped in. So it worked. His plan worked. And I’ve been here ever since.”

One of the reasons their partnership is so successful is because of their different approaches to podcasting.

“I start very much from a place of themes,” Danner said. “I see everything connected by the themes. And whether it connects by the plot or the setting wasn’t as critical to me at the beginning. I think in the long run, it’s stronger, having all those pieces. But the connections for me at the start were much more in the abstract than the plot connections.”

“And I’m the plot guy,” Van Dreason said. “I kind of pushed against that. I said, ‘No, let’s have it be set in one place. Let’s have this happen here. And that character interacts there.’ So once I came in, I started pushing more of a narrative drive into it, which was in another direction.”

“How Greater Boston started versus how it is now is very different,” Danner concluded. “Because we have a lot of plot now. Too much, probably.”