Inside The Crazy Ant Farm is not new to Podcast Magazine readers; raving fans have voted them into the Hot 50 for a few months now. You may also have heard about them in the Oct 2020 edition of the Podcast Magazine’s Hot 50 Countdown (hosted by yours truly!).

Co-founders and owners of the show, Dustin Bergmann and Logan Austin, are independent filmmakers.

As an indie film production company, they are currently working on some cool projects. What kinds, you might ask?

“We have several projects in various stages of development,” Dustin said. “It’s not just about film. We’re also working on three television series—one drama, one comedy, and one animated comedy. And then we’ve got a short film, which is a suspense thriller, and a feature film, a drama, in development.”

Dustin, a seasoned industry professional, met Logan at a new television production company where they both worked. That’s where their creative juices started flowing, and where they began Crazy Ant Media.

They began expanding, and the company took off, resulting in their decision to move to LA. Not everyone on their team was able to make the move with them, so they are currently building again.

In fact, Inside The Crazy Ant Farm was initially born as a way to gather contacts for their film and television projects.

“When we first decided to do the show, we were in Biloxi, Mississippi,” Dustin shared. “After moving to LA, it was like, how in the world do you get a company known in this city? We needed to build recognition of the name brand, and podcasting seemed like a good idea.”

“We focus interview segments on ‘up-and-comers,’ to provide them with advice from established actors in the industry. We help them discover how to mold their own path and get started in the industry. We really enjoy helping them out, because it’s very much a politics game in the entertainment industry, as well.”

No doubt an excellent resource for listeners, Inside The Crazy Ant Farm provides its audience with coverage of current events in Hollywood, Vancouver, New York, and Atlanta.

“We pride ourselves on speaking to the newcomers—people who want to learn. People who have a passion, but don’t know how to get their foot in the door. We want them to know everything that’s going on in the industry, so they are as prepared as possible when they meet with Hollywood executives. That’s necessary; you always want to be on top of your game. It doesn’t look good to be unaware of anything that is happening in the industry.” 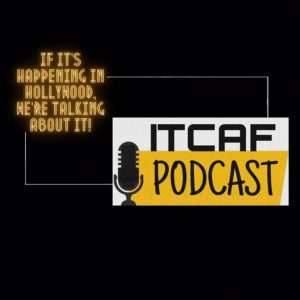 And, with the pandemic and subsequent shutdowns, things have changed dramatically within Hollywood and production, making it that much more difficult to follow all the shifts.

“It’s been a huge, huge transformation,” Dustin said. “Everyone was left to sort of figure out what to do. All the production was shut down, so people weren’t getting work. And a lot of people don’t realize that when you’re an actor in Hollywood, not everybody is Brad Pitt. 99% of the people are working actors. So when the shutdown happened, they were out of money. They didn’t know what they were going to do.

“On the upside, it created a perfect opportunity for newcomers to create content. Even well-known names in Hollywood who were on TV shows or in movies weren’t working anymore. Even they were saying, ‘We’re at home, and we have to create our own content if we want to stay relevant… to keep our name out there.’

“That changed everything for us. We had more access to people being home. We were able to book guests who could share all their experience in creating a series or acting in a project from home. Plus, they suddenly had to do it all, having become their own makeup person, casting director, camera person, set director… just everything. So it completely changed the industry. And it’s been a world of change for us, too, because we have greater access to them.”

While the pandemic has caused so much upheaval in life as we know it, it’s a (refreshingly) exciting time for Dustin and Logan. The rules are being rewritten in the entertainment industry, and the duo has discovered the key to success in this current climate: relationships and connecting.

Dustin said, “You know, the friendships and relationships we’ve been able to build over the past two-and-a-half years have been incredible. We’ve been really blessed, as filmmakers and creators ourselves, to be able to talk to Oscar winners and Emmy winners and Golden Globe winners and people who have been in the industry for 50 plus years. The information and stories they share are invaluable.”

“It’s also a really fun time for us to get to sit down for two hours every single week and talk about something we both really enjoy and love,” Logan added.

Shortly after releasing Inside The Crazy Ant Farm, Dustin and Logan watched as it took on a life of its own.

“It was like holy crap… we’re actually teaching people how to maneuver in the industry! So we’re actually a lot better than we thought we were, because originally, it was all about us. And now, it’s all about them,” Dustin said.

When the podcast really started to take off, the co-hosts realized that their interviewees were passing along not just general advice, but guidance that made a big impact on their listeners. That’s when they adopted a very specific question to ask each of their guests:

How did you get started?

And before they knew it, their audience grew as listeners discovered they had found a place where they could come and learn from others who had been on similar journeys about the mistakes they have made prior to becoming successful. This way, they can avoid similar pitfalls.

Luckily for listeners, Dustin and Logan have no plans to quit podcasting any time soon. They spoke to what drives them to keep going.

“It’s the adrenaline rush,” Logan confessed. “Just getting to talk to so many different people. One of our main goals is to get Oprah on the show. So we keep trying to level up the talent and on-air personalities that we book. But it’s also about learning from people, because once you feel like you stopped learning, that’s when you actually get left behind.”

The chances of Dustin and Logan getting left behind are slim—their listeners love them!

“Our fans are the best ever,” they said in unison. “We do all kinds of contests to help them as much as we can. We’ve got one going now where the winner will get a one-on-one hour-long session with a casting director to ask anything he or she wants around getting into the industry or auditioning.”

What started out as way for Dustin and Logan to build their brand and get projects has turned into a powerful tool for newcomers to get their hands on valuable insider information about breaking into—and surviving—the entertainment industry during some pretty crazy times.

The bottom line from the boys?

“If you have a passion for what you do, and a drive to go after it, you can succeed. We’re proof of that.”

* A quick note to my beloved readers:

It is time for me to say goodbye to the TV and Film category! I really enjoyed interviewing the hosts of so many great podcasts and writing about their amazing shows.

But don’t worry… I am not gone!

I am excited to announce my new position as the Category Director for all things Comedy!

In short, I love to laugh. It truly is the best medicine, and so beneficial to our physical and mental health. So, the Comedy category is perfect for me.

I can’t wait to interview podcast hosts who share my mission of bringing laughter to as many people as possible to make a positive difference in the world. Plus, I’m launching my own comedy podcast soon, so this shift couldn’t have happened at a better time!

I’ll “see” you all next month in the Comedy category!