Most reasonable people know that the vast majority of police officers are good and honest individuals. Each is someone’s father, mother, son, daughter, brother, sister, husband, wife, or friend who is dedicated to doing the job of law enforcement the best he or she can.

Those many good and honest cops would also likely be the first to admit that, just like all professions, there are indeed some unscrupulous individuals in law enforcement who absolutely need to be efficiently weeded out and dealt with aggressively.

But what happens when corruption and lawlessness aren’t isolated to just one or two police officers, but run rampant throughout practically an entire department? That’s what then rookie Brigid White experienced in the New South Wales Police Force in Australia in the 1990s.

Brigid served 16 years in that police force without ever sharing her story. Then came along Australian filmmaker Sarah Hatherley.

Sarah originally connected with Brigid to conduct research on a completely different project. Before long, though, it became very clear to Sarah that Brigid’s story was much more important than the film she was working on.

Thus, Sarah created the Use of Force podcast—her first foray into the world of podcasting.

Despite her prowess as a filmmaker, she chose to take the advice of her colleagues around the podcasting medium being the best fit for telling Brigid’s story. This wasn’t without some pushback, however: “I’m a filmmaker. I think visually. I can’t do a podcast!” Sarah reminisces about those early discussions on how to best deliver this story.

Then there was the style of the show to consider. Some true-crime fans will find Use of Force refreshing thanks to its lack of the investigative-journalist style that has become quite common in the True Crime Category.

“I can’t be that investigative reporter,” Sarah admits. “I’m interested in stories. Stories are how we understand ourselves in the world.”

When it became clear to Sarah that there were fewer obstacles to creation with a podcast, she began having a number of simple conversations with Brigid on a recorded line. “I recorded her just to have a record of that human unpacking of her story,” Sarah explains. “I didn’t want to take notes, and I’m not a journalist by trade. I wanted to have a human experience with her.”

While Sarah had no doubt that Brigid’s story needed to be told for multiple reasons, there is always some trepidation around laying out others’ secrets. “I had a visceral fear of putting her in danger by dropping the fig leaf of fiction,” Sarah says. “With fiction, we’re all safe.”

However, the need to get the story out there overcame the fear. “What really made me launch it was the really interesting insight into a world I had no idea about that she was providing.” Sarah recognized that the same would be undoubtedly true for a vast number of people around the world.

Her fellow Australians, however, would find Use of Force much less of a surprise. “The corruption of the New South Wales Police Force is well-known here. It’s not a newsflash by any means,” Sarah chuckles. “The hierarchy hasn’t come knocking at my door. They know about this stuff.

“What we didn’t know about was what it is like to be a woman in that force,” Sarah continues. “Brigid went into the force in May of 1994—the week after an independent member of parliament had this Royal Commission investigation into the corruption of the New South Wales Police Force. So the very week that began, here comes this pretty, bright-eyed, enthusiastic ‘I’m here to help’ 19-year-old woman. At the time, she thought the corruption they were looking into was historic… ‘back in the day’ type stuff.”

Brigid quickly learned that the commission would be investigating corruption surrounding her from day one. “At graduation, the head of the academy even warned them—they said, ‘Because you are the first of the force birthed during the commission, your new colleagues may believe that you are a plant from internal affairs.’ Then, they put them into a system with a command-and-control structure in which they could not question their senior officer,” Sarah shares.

It is obvious, both in the podcast and during her interview with Podcast Magazine®, that Sarah genuinely cares for Brigid. And although Brigid may seem rather matter-of-fact in her detailing of her experiences on the police force, Sarah explains that Brigid’s recalling of it was never easy.

“She had been silenced, gagged, and intimidated. I wanted to give her a voice,” Sarah shares in a maternal tone. “She has felt safe telling her story in our bubble. She hasn’t listened to all of the episodes, though. She can’t. She’s given permission for everything, but she says, ‘I can’t listen to my pain.’”

Fortunately, in many parts of the world, people have more understanding and empathy for PTSD and PTSI today—particularly for those in public-safety professions as well as the military. Therefore, listening to Use of Force can be triggering to some. 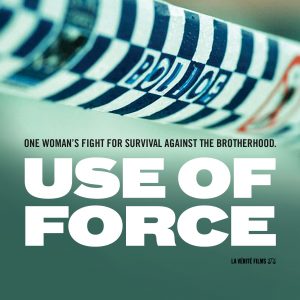 Telling your story can also be therapeutic. At certain times during the episodes, Brigid seems somewhat comforted by the process of laying out the details of her career.

Sarah hopes that Use of Force offers a similar therapeutic aspect to her listeners. In addition to those in public-safety professions and the military, she believes many female executives will be able to relate the show to their own experiences in the corporate world. The podcast simply offers a more “hardcore” example in that it took place within the law-enforcement profession.

Without a doubt, Brigid needed bravery to tell her story. It was also brave of Sarah to put aside her filmmaking expertise and try her skills at podcasting. Listeners can tell that she was, in essence, learning on the fly, as the sound and quality is markedly better in episodes three and four.

Sarah’s novice approach can also be quite fun and welcoming in both an authentic and clunky sort of way. Specifically, her reactions to Brigid’s story, which are heard plainly throughout the episodes, seem more aligned with our reactions as listeners than what you might expect from a host.

Sarah quipped at that authentic aspect of Use of Force. “There are people who say, ‘She’s really annoying. She makes noises,’” she laughed. “I sit there and go, ‘I don’t give a flying —-!’ I’m simply having a human response. What is the point of editing out my emotional reaction to what she is telling me? During our conversations, she would not have divulged the things that she did if she wasn’t getting that positive reinforcement from me. There’s a lot that was just Psychology 101. I wanted the story and didn’t care how I sounded getting it.”

The show’s conversational brand that Sarah and Brigid created via their phone sessions worked so well that they actually scrapped the idea of recording in person. “Brigid came to Sydney, and we tried recording in person. It was just all wrong. We were used to talking on the telephone,” Sarah recalls. “There’s an intimacy on the phone, and that’s what podcasts are about—the intimacy of the shared experience.”

In true “Beyond the Microphone” fashion, the sub-story of a filmmaker diving headfirst into the world of podcasting is almost as intriguing as Brigid White’s real-life accounts of her experience.

Sarah says the feedback she’s received on both the creative style of the podcast as well as the content has been “balanced.” Some of the responses speak to the recurring theme of the true-crime genre serving a purpose in society beyond simple entertainment—like this one:

“This is a wonderful podcast. I teach criminal justice ethics in the U.S., and I have my students listen. It’s been a wonderful addition to the class.”

A wise person once said that if we don’t know our history, we are doomed to repeat it. Most good and honest police officers will adamantly express how their own hatred of bad cops surpasses that of a civilian’s. In their eyes, these are the people who tarnish an honorable profession many love and respect.

To that end, in addition to being entertaining, Use of Force serves a critical purpose. It opens our eyes to what has happened and what could happen again if we are not diligent. We owe Brigid White a thank you for being brave enough to share her story, so we can learn from it. We also owe gratitude to Sarah Hatherley for being brave enough to bring it to the ears of the public through the art of podcasting.

UTR: A Slight Change of Plans with Maya Shankar