Ghosts, ghouls, witches, trick-or-treating, horror movies, costumes, fall festivals… all are embedded into what has become a month-long celebration of Halloween and harvest. It’s about both the here and now, as well as the afterlife.

There are countless podcasts covering movies in the mystery, horror, who done it?, and slasher/thriller genres. Each celebrates and explores something different about the films beloved by those who like a little fright and suspense in their lives. These shows can approach a specific movie franchise, film style, or the mystery and murder that draws so many viewers to them via their own unique personalities and voice.

Unfortunately, though, the space has become oversaturated with shows that have become white noise cluttered by the same old format. Their approaches have become bland and boring.

Fortunately for listeners, the world of podcasting is also filled with creative ideas and approaches to stale categories.

A New Approach to Life and Death in Cinema

When a genre becomes oversaturated with podcasts, it is hard to stand out and let your voice be heard. That’s when you have to become creative with the show format and approach. You have to do something unique and fresh.

Films To Be Buried With is one such fresh and unique show. 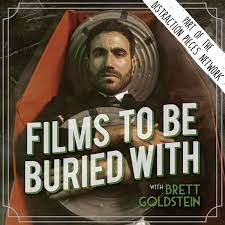 Instead of focusing on films in these genres, host Brett Goldstein, known for his acting in SuperBob and Ted Lasso, asks guests to imagine they have reached their demise—their expiration date. In this imaginary world, Brett and his guest kick off the conversation by exploring how the guest died. While this may seem morbid and dark, the conversation is often amusing and humorous. Some of the guests have ‘died’ in very unusually funny ways.

After this, we get to the really creative part of the show…

This Is Your Life… Through Film

‘The soundtrack of our lives.’

That’s how we often think of music. Many even create custom mixtapes or playlists that become that very soundtrack. We don’t often think of our lives through the lens of film.

But when you look back over your life, you may remember movies that hold a special place in your heart. It could be the film you watched on your first date, a holiday movie you enjoyed as a kid, or a blockbuster movie you binged over and over again.

Films are a part of life in unique ways.

Through Films To Be Buried With, Brett leads his guests through a series of questions to help them explore and paint the picture of their lives through the films that have impacted them.

A Clever Way to Explore Films

The more you listen to Films To Be Buried With, the more you begin to see the uniqueness of it. So many podcasts are about hosts and guests dissecting, reviewing, and ranking films. This is a great way to critique a film and discuss your opinions on it. There is nothing wrong with this format, but Films To Be Buried With changes it up, providing us two very unique takeaways:

First, you get to learn more about the guest and his or her personality. Movies, like many other things, are very personal. Each one of us has likes and dislikes. Some things we just simply click with while others turn us off. As Brett guides each guest through the conversation, you learn more and more about the individual and the films that helped to shape his or her tastes.

Second, you learn all about films you may or may not know about, but not from the viewpoint of a film critic or superfan. Instead, you get to hear the guests share their very particular experiences with the film—stories that are often filled with other powerful stories that will make you laugh and/or feel the guest’s pain. This take on reviewing films is not only a great way to discover films in relation to someone’s life, but it’s also a powerful way to connect with another person’s very intimate experiences with the films they both love and loathe.

On its surface, Films To Be Buried With seems to be a very simple show about people and films. And yes, it is.

But it is done in a fresh and fun way… by looking at films through the lens of death, you may actually find new life in the movies you watch.