Margaret Killjoy’s podcast, Cool People Who Did Cool Stuff, should probably come with some sort of health warning for staunch right-wingers who are likely to take offense at historic tales about people resisting the White patriarchy. If you’re one of them, this is probably not the podcast for you.

If, on the other hand, you get turned on by hearing stories (told with good humor and wit) that have been overlooked, at best, or deliberately suppressed, at worst, then Cool People Who Did Cool Stuff is highly recommended.

Margaret herself is one of the “cool people.” She’s a transgender woman, an anarchist, and an all-round creative powerhouse. Apart from the podcast—a relatively recent venture—Margaret has published a number of books across both the fiction and non-fiction genres. She also plays in bands that similarly cross different genres, from antifascist neofolk to her black metal band, Feminazgûl, which is not for the faint-hearted.

Cool People Who Did Cool Stuff is one of several ideas Margaret had for a podcast. She’s a firm believer that “There cannot be too many podcasts—that would be a bit like having too many books.” She comes from a background in punk and zines and thinks that podcasting is part of this tradition, with its homespun, democratic qualities.

Margaret was already a fan of Behind the Bastards, one of the shows produced by Robert Evans of Cool Zone Media and part of the iHeartPodcast Network, where Cool People Who Did Cool Stuff is a natural fit. That show is co-produced by Sophie Lichterman, who went on to co-host Cool People (and who incidentally has one of the best laughs ever).

Each topic is covered over two episodes and features at least one other guest. Margaret says, “The ideal guest for this sort of format is an audience self-insert. I want a guest who knows less about the topic than I do. But I also like if a guest has context around the issue and is able to offer insight.”

Cool People Who Did Cool Stuff is not a chronological history podcast, so listeners can dip in anywhere that takes their fancy. Margaret recommends the episode titled “The Civil War Within the Civil War: How the South Won the War for the Union.”

She had heard inklings of this story, but delving into it fundamentally changed the way she understood American history. “I grew up being told that White Northerners basically went and beat up the White Southerners,” Margaret says. What she learned, though, was that Black resistance and the withholding of labor crippled the Southern economy, enabling the military victory. 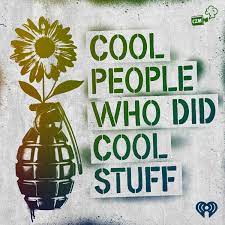 This really is a fantastic episode. It covers the Lowry War, during which a group of mainly Native Americans of the Lumbee people, led by the Lowry Family, first resisted the Confederacy and then federal troops. The episode includes a real-life account of someone actually filing through the bars of the jail with a file baked into a cake that had been smuggled in by his wife. This incident compelled Margaret to double-check her research, as it sounds like a tale from a cartoon.

Her own favorite episode is the one about the Russian Nihilists—the first story she researched.

“It’s a fun episode about 1860s hippies in Russia who become mad bombers and try to kill the tsar and have Loony Tunes escapades.” Despite the “History doesn’t repeat itself, but it rhymes” cliché, Margaret says it’s always fun to find historical narrative arcs. This particular story is reflected in the narrative arc of the 1960s hippies “in terms of being a sub-culture that is then cracked down upon by forces of reaction, with a smaller subsection becoming increasingly radical.”

Various future episodes are already lined up, including one about the Spokane Free Speech Fight, 1908, when an army of hobos performed a massive act of civil resistance just by exercising their right to free speech.

This episode is exactly the kind of thing that really excites Margaret. She gets to tell obscure stories that really should not be obscure at all, as they form such an important and relevant part of the history of the U.S.

Emblematic of this are two episodes about Blair Mountain—subtitled, “When Miners Went to Literal War Against Their Bosses.” They chronicle the largest armed uprising in the U.S. since the Civil War.

Apart from these stories of resistance, another common thread in Cool People Who Did Cool Stuff is the history of LGBTQ+ people. Margaret has done episodes on a non-binary Dutchman icon in Revolutionary-Era America who was part of the gay resistance to the Nazis. They firebombed Nazi records, going to their death writing, “Never let it be said that homosexuals are cowards.”

Again, this is a part of history that is difficult to research, given how these people are often written out of history altogether, or at the very least, whose sexuality is deliberately omitted.

Margaret adds, “How we view sexuality changes. If I were to talk about a medieval trans woman, for example… conceptions were so different at that time that they don’t actually map one-to-one to the current conceptions of gender. I think that’s fine and beautiful. I don’t think there will ever be one right way to have society explain and understand gender.”

She goes on to explain that there are many stories of “women” dressing as “men” to go fight in a war, but what we don’t know is whether those same people spent the rest of their lives dressed as “men.” People rarely declared their gender in no uncertain terms, like “I am a man.” It was simply blurrier and messier, then.

Margaret believes these stories matter today in terms of counterattacking the perception that transness and homosexuality are a “new thing.” She likens it to the graph that tracks the percentage of left-handedness over time, where it shoots up and levels off just at the time when people were allowed to be left-handed.

“We have always been there! But people have been closeted for so long. Only recently have we had the language to speak about it.”

Margaret certainly does have the language to speak about it, and she does so wonderfully, while bringing alive fascinating stories on her podcast.

A Deeper Dive Into True Crime