What happens when two Los Angeles-based forensic psychologists currently working in the criminal justice field come together to host a podcast?

You get a really insightful and entertaining true-crime show—LA Not So Confidential.

Hosts Dr. Shiloh and Dr. Scott provide unique perspectives on the cases they cover. But truth be told, not every episode is based in CA. Even more unique is that Dr. Shiloh is a former police officer, and Dr. Scott is a former casting director… a very unusual combination. What began as a friendship has since turned into a podcasting team—one that wishes to remain anonymous.

They intentionally choose to omit their last names and avoid talking about the government agency they both work for. This is because they work with some very high-profile cases in their day jobs.

Podcast Magazine® had a chance to catch up with the pair in Las Vegas during CrimeCon earlier this year to talk about their popular show.

The first obvious question: how did this friendship turn into a podcast?

“We met in 2009 during our internship,” Dr. Shiloh reminisced. “From day one, we became quick friends. It was absolutely a trauma-bonding experience throughout our internship and as we prepped to get licensed.” 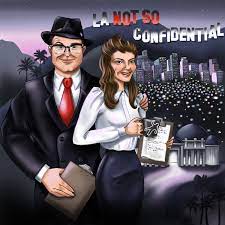 “We were working in an actual forensic site,” added Dr. Scott, “as opposed to some run-of-the- mill community mental health clinic. We were dealing with people who were going into prison for very severe crimes and those coming out of prison and entering into lifetime monitorship.”

“It was intense,” Dr. Shiloh continued. “Hence, the reason we latched on to each other.”

When they began their new careers, they stayed in touch and became even closer friends. Their families even spent time together.

Fast forward to 2017, and they are working in the same agency. “Scott had turned me on to podcasts a few years before. We went to lunch one day, and I mentioned that there is nobody in the field of forensic psychology doing a podcast. There was such a void in the true-crime space, and I said, ‘We need to do this.’”

Dr. Scott wasn’t as enthusiastic about the idea. “I said, ‘Absolutely not.’ I questioned how we even could… we work full-time!”

“Plus, we knew nothing about podcasting,” Dr. Shiloh interrupted with a laugh.

Regardless, she persisted, trying to convince him. Finally, Dr. Scott blurted out, “LA Not So Confidential!” It was at that point that she knew he was on board.

“That title came to me like a bolt of lightning,” Dr. Scott added. “We both just love our city so much. Plus, being an enormous metropolitan area, there’s a lot of crime.” This of course provides the hosts with a practically endless source of cases.

“There’s also a play on words there,” Dr. Shiloh added, “because of doctor/patient confidentiality. But here we are, gabbing about it. Those elements fit perfectly.”

Dr. Scott shared that they may have jumped into recording episodes before they were ready. As they improved their craft, they thought about re-recording their early episodes, but a wise consultant advised them not to. It is that very progression that is often intriguing to fans, and it also tends to make the podcast and the hosts more endearing.

Looking back at those early days of their podcast often makes them laugh.

“We had such sticks up our *sses back then,” Dr. Shiloh laughed. “We were so proper and clinical, always trying so hard to say the right thing.”

From the beginning, though, there was a chemistry and authenticity between the hosts that worked.

In one early episode, they joked about having ten listeners… which was about nine more than they expected. Today, they have over 100 episodes under their belts, and as one would expect, their banter is more natural, and the sound quality is better. Most importantly, though, their content continues to be top-notch.

Many listeners have said they feel like they are in the room with the hosts while listening to the podcast. When you receive that kind of feedback, you know you have created something special.

Another of the special aspects that fans of LA Not So Confidential appreciate is the professional detail the hosts provide. As Dr. Shiloh put it, “We’re not just pulling this out of our *ss.” They openly share where they get their data and research, which brings an element of sophistication listeners don’t always experience in the true-crime genre.

“It seems as though listeners are gravitating to the show more,” Dr. Shiloh said.  “And somehow, we’re figuring out how to work full-time jobs and podcast.”

Fans of the podcast almost certainly keep tuning into new episodes due to the quality, intellectual nature of the content, and perspective.

“I am a huge fan of TCM’s Noir Alley,” Dr. Scott said. “I felt noir should be our perspective, too. It’s about the exploration of the darker aspects of human behavior and the human psyche, as well as the anti-hero and people who live in the gray area. That’s really what psychology is all about. You have to inhabit a place that is no longer in the black and white. You understand that this person is a monster and has done horrific things, but that there’s a reason why he or she is a monster. There might be a percentage of it that is organicity within the brain structure or the chemical makeup, but there are also a lot of environmental factors that contributed to why it happened.”

The hosts’ desire to cover cases that will ultimately help listeners understand “the why” behind criminal activity—even when it isn’t necessarily apparent—is their driving force behind choosing the cases they feature.

Being comfortable in that gray area has allowed them to create something different in the true-crime space—and that difference has helped them develop a loyal following.

“People say, ‘I don’t understand why this person did this,’” explained Dr. Scott. “Not only do we get the forensic psych background about the psychopathy that may have contributed to something happening, but we also talk about the reason we all want to know. It is because we all have this human desire for closure and resolution. That allows us to then circle back around to that big gray area. I think that speaks to why people are so fascinated by true crime.”

If you have a burning desire to know more about “the why,” give LA Not So Confidential a listen, if you haven’t already. Odds are, this is a podcast that will fascinate you.

UTR: Seriously, What the Frick?