Chenese Lewis grew up in Baton Rouge, Louisiana. Having always been plus size, she remembers her parents instilling her with confidence and self-acceptance from a very young age.

“When I was in kindergarten, my mother said, ‘You are smart, and you are beautiful. If anybody has anything negative to say about you, just ignore them.’ I’m 40 now, and I remember those exact words because they had such an impact on me. And even though I was bigger, she and my father never belittled me. They never said anything negative, and they never told me I was unattractive. They treated me well and lifted me up. As a result, I never had a problem with confidence or self-esteem in school. I was popular, and I was outgoing. I didn’t have to learn to love myself. Nobody had ever told me there was anything wrong with me.”

Chenese had dreams of being a model, and like many young women, she also fantasized about becoming an actress and moving to Hollywood. She looked up to Queen Latifa, Mo’nique, and Oprah. Her first modeling experiences involved her having to pay for the opportunities, but she wasn’t deterred. And soon, she found another opportunity.

In 2003, Chenese entered her first plus-size beauty pageant, and ironically, it was also the inaugural year of the Miss Plus Size America Pageant. Chenese made history as the pageant’s first winner!

Chenese decided it was time to move to Los Angeles if she was going to be serious about her career in show business and modeling. Her parents were supportive of her dreams and even provided their daughter financial support, so she could focus on building her network.

However, Chenese wasn’t able to sign with a talent agent, because “Even though there are agencies that represent plus-size models, they have physical standards. Many plus-size models have flat stomachs, which doesn’t really represent the average plus-size woman in Walmart. I also didn’t have the height, because I’m 5’6”. So, I was freelance, and I leveraged my national title, personality, and charisma. I was still able to book a modeling job with a national retailer on my own.”

Within three weeks of moving to Los Angeles, Chenese landed her first gig in a hip-hop music video, “Jook Gal” by Elephant Man!

“I was so excited,” she shared. “I was like, this is a sign that I did the right thing. I was young, and all my friends were watching music videos at the time, and when they saw me, they said, ‘Now, you’re famous!’ I told myself, this is where I need to be. And I just kept building from there.”

Chenese laughingly recalled how, “At the time, I was using the internet to apply for modeling and acting gigs, and one of the websites I used was Craigslist. In 2004, you could still get some good jobs from it in Los Angeles. I wouldn’t do it today!”

Despite the initial difficulties Chenese experienced in LA, she was determined to succeed, “Everything I did was a big deal,” she said, “because I was not the industry standard. I was not a thin, white woman. I was not what they consider a ‘leading lady.’ Everything I was doing was groundbreaking at the time, because I was a visibly plus-size woman of color. I went to Los Angeles with all the odds against me, overcame the obstacles, and was still able to succeed.”

She continued working and was cast on BET’s Hell Date and appeared on four episodes. Then, another cast member invited her to attend a woman’s empowerment group, Goddess Gatherings, facilitated by Tomiko Frazier.

“Tomiko is a supermodel. She was the first African American woman to be the face of CoverGirl, and she’s still modeling to this day in her 50s. She was also pursuing hosting, and she was enrolled in classes. She recommended them to everyone in the group. I didn’t know what hosting classes were; I didn’t even know hosting was something I could pursue professionally! But when opportunities come up, I just go with it.” Little did Chenese know that the trajectory of her life was about to shift again.

In 2008, podcasting was still relatively new. Chenese’s hosting teacher, Idalis (a former MTV VJ), recommended that she begin a podcast to improve her interviewing skills. Despite never having listened to a podcast, Chenese had faith in her teacher’s suggestion—especially if it meant improving her professional skills. Chenese jumped into action, following the example of one of her classmates, and within a matter of days, she launched her podcast, The Chenese Lewis Show, on Blog Talk Radio. 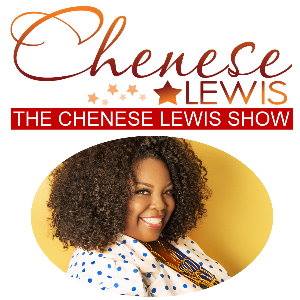 At the time, there were no podcasts dedicated to plus-size women, so Chenese found quick success. Because of her reputation in the plus-size industry, Chenese says, “It was easy for me to get partnerships and influential guests. My podcast was a success from day one.”

While her show took off, Chenese was also an active member of the Hollywood chapter of the National Organization for Women. Part of her work included the organizing the first annual “Love Your Body Day” with Kim Coles as her co-host.

“Love Your Body Day” was created to “turnaround the negative body image and stereotypes created by Hollywood and the media to promote a healthy body image for women and girls.” The highlight of the event was a fashion show that featured women and girls of all shapes and sizes.

Soon, Chenese’s podcast and interview style caught the eye of a representative of BlogTalkRadio, and Chenese was chosen to represent them at the Essence Music Festival in New Orleans.

“I was seated on a radio row. My podcast was alongside major radio stations. Now, this was full circle moment, because remember, I had taken hosting classes so I could do interviews, and there I was! It worked its way around, and I got to interview celebrities like Gladys Knight, Boys 2 Men, and so many others, and I continued representing BlogTalk Radio five years in a row.”

In 2010, as part of her “Love Your Body” event, Chenese and her celebrity host, Whitney Thompson, gained a great deal of media attention.

“Whitney Thompson was the winner of the 10th season of Tyra Bank’s America’s Next Top Model. She was the first and I think only plus-size model to win. She was my celebrity host, and we posed nude together. Our photo went viral, and we got a lot of media coverage. Unfortunately, this was before Instagram, or I would have way more followers! But the eating disorder community ended up reaching out to me because they thought I would be a positive role model. I became the spokesperson for one of the organizations, speaking at conferences and expanded my brand. One thing has always led to another for me. If you just do good things, opportunities will present themselves to you.”

In 2014, Chenese, an only child, returned to Baton Rouge to assist her mother in caring for her father, who had become bedridden. Several months later, Chenese was admitted to ICU after her body went into sepsis from a wound on her leg. She was placed on life support.

Two miracles occurred: her father found the strength and inspiration to visit his daughter in the ICU, and Chenese survived without permanent damage from her condition. Her father has also fully recovered.

Chenese thought the life she had built for herself in Los Angeles was over. To her surprise, though, she continues to get offers for work around the country. “I’m not on TV, because I’m not in Los Angeles. So I don’t go to auditions. But I still travel, and I podcast, which enables me to keep my brand going. So everything worked out. This year, I’m celebrating 20 years in the plus-size industry. I’ve been doing a lot of interviews, and they are calling me an ‘icon’ and ‘trailblazer’ in the industry. I am blessed in so many ways.”

In October, Chenese was featured in a Forbes online article to celebrate her two decades in the industry. Ever evolving, she is hoping to leverage her industry standing to join a large podcast network and sign a book deal.

She is also planning on landing interviews with dream guests, Oprah and Lizzo.

Her message to you, dear reader?

“I like being an inspiration for women, not just with body positivity, but with life in general. Keep going no matter what obstacles come your way. You just have to have the faith and keep going.”

Under The Radar: Marriage is Funny

Under The Radar: My Camino the Podcast