In the arcane land of Aaru, full of regal country sides and forests, it’s once halcyon days now gone, and people are resolved to live separate from each other. The prophecy passed down, followed by believers, will set forth the path for the One, leading the land of the Aaru back to its days of lore.

And as the podcast creator, you can make your audio drama as simple or as complex as you’d like.

It’s even possible to create a fiction podcast all by yourself (although you’d have to wear an awful lot of hats: writer, actor, and audio engineer).

Or, you could go in the complete opposite direction and enlist a small army of talent. 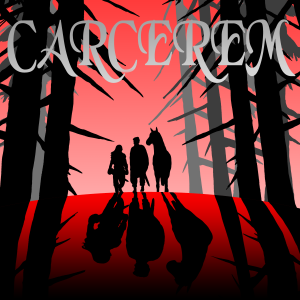 “It takes place in the land of Aaru,” said Shane Salk, one of the creators. “At one point, magic had been used to make the land very nice and prosperous. But years before, everything kind of turned to dark magic, which was once glorious, but is now feared by all and tracked down. And there’s a group of basically state-run marauders called ‘vigiles’ who come around and take children who are shown to have magic. There’s a prophecy that’s been passed down through generations that talks about how there is a one true Savior, and our heroes go off to try to help, because they think they found that One, and want to help him save the land of Aaru.

“There’s monsters and magic and sword fighting, and we actually start right into the middle of the action. There are over 120 characters and actors in the first season… which is a lot, as it turns out.”

If that weren’t enough, there’s also 31 episodes in the first season (whereas most audio dramas have 10 or less episodes per season).

“My daughter and I were watching Disney+,” said co-creator William Holmes, “and they have a 10-episode documentary around the making of Frozen 2. It was really interesting. So, I’m about three episodes in, and I kept looking at my daughter and saying, ‘This is what we’re doing. But they have 1500 people working on it, and we’re putting ours together with just me, Shane, and a handful of people.’ So, it’s a been an eye-opening experience. It’s a hell of a project we took on.”

Salk has been working in the audio drama space for over a decade, starting with We’re Alive (which has now well over 200 million downloads) in 2009. “So, I was at the very forefront of this audio series movement.”

Part of the inspiration for Carcerem came from Salk’s childhood. “I grew up listening to old-time audio, from like the 40s, 50s, and 60s. And so, I have a great mind for sound design and bringing it up to date.”

Holmes adds: “One thing I love about this medium, and I’ve done everything from film, to animation, to everything, is that the audience totally gets to create what they see in their own head. For instance, my own son, when he was listening to it, he said, ‘Oh, it’s kind of like I’m reading a book. I’m seeing it like I’m reading a book.’ Even Shane and I argue about it while we’re making the thing. Occasionally, I go, ‘Wait, no, no, no. When we’re in the bar, this is over here.’ And he’s like, ‘No, no, no, it’s over there.’ But I love it when people say things to us like, ‘Listen, when they were running up that hill and blah, blah, blah…’ And Shane and I look at each other like, ‘Did you see a hill? I didn’t see a hill.’”

Holmes continued: “In fact, we actually had to educate the writers we hired to write it like that. They would ask, ‘Do you want us to write stuff like ‘He goes to the window and opens it?’’ And we’d say, ‘No, just write it like a film.’ And they would always look at Shane and go, ‘Well, how are you going to get people to see that?’ We’re like, ‘Relax, it’ll happen.’”

“It really is how we think about it—it’s more than an audio experience—it’s an immersive experience,” Salk explained. “When I came to this project, I knew I didn’t want to do it like a typical audio drama. I wanted to make Game of Thrones. I want to be the HBO of audio theater. I don’t want to use the excuse, ‘Oh, well, because it’s audio, people will buy it,’ or ‘Because it’s audio, people will understand the quality.’ I didn’t want that. So I’ve been working on putting all of this together for many, many years. And we pulled it off.”

As for what’s next for Carcerem, once this first season is complete, we’re just going to have to wait and find out. Salk isn’t talking.