April Calahan and Cassidy Zachary did not set out to start a podcast. Both fashion historians with master’s degrees from the Fashion Institute of Technology and Fashion and Museum Studies from MIT in New York, the pair actually met when Cassidy assisted April with her first book, Fashion Plates, 150 Years of Style. From there, they ended up co-authoring a second book, Fashion and the Art of Potiphar.

Following the release of those books, Holly Friday, host of Stuff You Missed in History Class on the HowStuffWorks Network (which was acquired in 2018 for $55 Million by iHeart Radio), invited April to be a guest on her show.

April and Cassidy really like working together. They also shared a lot of the same interests, including their passion for fashion history, and quickly realized the value of their partnership. April asked Cassidy to be her partner in podcasting. Holly became their executive producer, and the rest was, shall we say, fashion history!

Launched in February of 2018, the premise for Dressed: The History of Fashion was that, with over seven-billion people in the world, we all have one thing in common—every day, we all get dressed.

“Originally, we started out with HowStuffWorks,” April said. “That was our umbrella network. About a year in, iHeartRadio actually came to HowStuffWorks and said, ‘Hey, we realize we have all these media and audio offerings, but we don’t have a single podcast in our network.’ So, iHeart wholesale scooped up all the HowStuffWorks podcasts, and that’s how we came to be under the iHeart umbrella. We were really, really lucky from the very beginning to be approached by a major podcast company and given the opportunity to develop our own show.”

When the show first aired, April and Cassidy were doing an incredible amount of research every week, while also producing, writing, and recording original content. Producing one full-length episode a week allowed them to get their feet wet and work out their rhythm in terms of writing and producing. Since they had worked on two books together, they had some ideas about how the writing part would work. Soon, though, they discovered that writing for a podcast is a very different style of writing. In their first season, they were able to get the flow down. 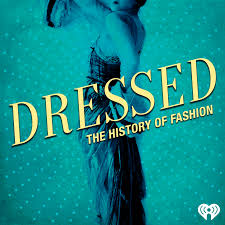 For the second season, the pair pivoted to more of an interview-style show, interspersing those types of episodes with research-based episodes. From there, they added a second “minisode” every week, which morphed into the “Fashion History Mystery” segment that evolved from the constant questions they received from listeners.

Said Cassidy: “We invited live questions, and it was so much fun to answer them, especially questions we didn’t necessarily know. It became this really fun research quest to uncover the ‘fashion history mysteries,’ and it just turned into the perfect little minisode.”

Because both hosts have full-time jobs, it made sense for them to set up the show in seasons. They take a winter hiatus, during which they spend a lot of time researching, and then launch in to the next season in perfect timing with the start of Fall Fashion Week (which is in February, when designers debut their fashion lines for the following fall).

April and Cassidy are 100% responsible for all the talent and creative aspects of the show content. They do it all: creating the content, developing the ideas, organizing guest appearances, and obviously, hosting the show. Then, they turn everything over to the support team at iHeartRadio, who handles all the back-end stuff as well as advertising and a little bit of social media.

Cassidy and April also run a very robust Instagram feed that they use as a platform, because of course, their’s is a very visual industry. Instagram acts as a visual companion to what they talked about on the show, and they post every single day.

When asked about their favorite parts of doing the show, they agreed that it’s all the amazing people they’ve gotten to meet and interview—like fashion journalist and author Dana Thomas, who came on the show to promote her new book, Fashionopolis: The Price of Fast Fashion and the Future of Clothes, and the legendary fashion designer Stephen Burrows, who they had the opportunity to interview in New York this past season.

“One of the most special moments for me,” Cassidy said, “was interviewing Tony Vaccaro, a 98-year-old photographer who was a combat soldier in World War II. He turned to fashion photography in the post-war period, and really found beauty there. After all that pain he felt and death he experienced, he found this beauty… it’s just this really wonderful, magical story. And, he’s still photographing every day to this day.”

This show is a win, win, win, all around. Cassidy and April get to entertain fans as well as meet icons in the industry right alongside their listeners, and their featured guests have the opportunity to be featured on an extremely popular show.

April summed it up by saying, “It’s so rewarding, building our international community while raising awareness of Fashion History—this crazy thing we love and are privileged to do.”

UTR: Does not Compute

UTR: Thespis In the Green Room: A Podcast