Betty in the Sky With a Suitcase is a fun podcast that celebrates the airline industry from a flight attendant’s eye level view. Betty N. Thesky is the host of the long running podcast, published monthly on a fairly consistent basis, even through some of the airline’s toughest days in 2020. Betty publishes her podcasts anonymously to protect the major airline she works for. Betty also waits to talk about some of the stories on air. She’s careful to make sure she edits out names – both of the airlines and the people the stories are about.

“I’ve been trying to protect myself the whole time I’ve been doing the podcast. A long time ago, I got an email from the chief pilot at the company I worked for. I was like, oh no, oh no, I’m finally finally gonna get in trouble. And he said, I can recognize some of the voices and I really liked the show, so that was actually really fun.”

Besides Betty’s sense of fun and her and her storytelling, she has a very distinctive and recognizable laugh which keeps the podcast entertaining. “The goal with the podcast is just light entertainment. There’s so much seriousness and there’s so much negativity in the world. I try not to have stories with basically just fight talk, you know like complaining about passengers because that’s not entertaining – you know this is – it’s light entertainment, just light and fluffy.”

The podcast’s format is a series of stories. Some stories are Betty’s stories, others are interviews with passengers, while others are stories actually contributed by passengers. One of Betty’s favorite stories is the VCR episode.

“A long time ago, we had a flight from Dallas to Honolulu. This is when a camcorder was so big you used to have to rest it on your shoulder with a big VHS  tape in it, so it’s not like you can watch it back. The flight attendant asked one of the three pilots to film the Hawaniaan islands as they landed. She said,  I know you’re not supposed to but it’s such a beautiful day, you know, and there are three of you, would you mind filming the islands as we land? The pilot was like ‘oh no problem, give me the camcorder.’ So he takes the camcorder and he’s being a good tour guide and he’s zooming in and he’s saying what’s what. And then he pans over to the captain and the captain has his pants down, mooning the camera. The three pilots are laughing and laughing. They know she’s not going to see it that night because she didn’t have a VCR in her hotel room.So the next day they were laughing they said ‘why don’t you give us your camcorder again and we’ll film the other side of the island as we take off?’ She said “Oh, that was not my camcorder, it was a passenger’s!” 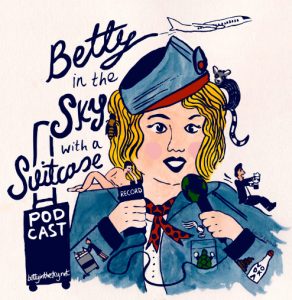 Betty looks for stories. She laughs, “I’m the only flight attendant that’s excited when somebody like pees in the aisle, or a dog pukes or whatever. I’m the only one that’s happy because that’s” Oh, good, it’s a story!”

Her start in podcasting was a bit of happenstance with some deliberation thrown in. She has varied interests and had heard of this thing called podcasting but wasn’t really familiar with the technology or how it worked. One of the pilots had just started a podcast and asked if she would like to add some of her stories. Her first contribution was actually recorded from the cockpit during an overseas flight while the passengers were asleep. From there, Betty started recording stories to contribute to his podcast. “I had no idea how to edit the audio I sent him. The audio was so bad. The pilot basically decided I was going to be too much trouble and he was like, ‘You have to do your own podcast.’”  At that point, Betty decided she had the equipment so she decided to tell her stories. What she didn’t know, she Googled. She also had the benefit of being on the pilot’s podcast, which gave her an audience.

“I love to tell stories, I’m a ham. I loved to hold court, and I always loved all the senior flight attendants had these great stories and so when I heard of this new technology, a new medium. I thought it was perfect for all the crazy airline stories.”

During the pandemic in 2020, when airlines were very restricted, Betty turned to her journals for stories. She had kept travel journals for years so she used those stories as a reference to continue her podcast during the tough travel time.

“Money isn’t the only thing in the world. I’ve gotten so many opportunities from the podcast which is very valuable.”

The podcast has opened doors for her.  She has authored several books and has been featured in Travel and Leisure magazine. She has also been featured  in an audio documentary by the BBC, “100 Women Around the World” keeping company with Chelsea Clinton and Malala Yousafzai.  “It was a one hour audio documentary so I was chosen as one of the 100 women around the world.  To me, I mean, who cares how much money you’re making it. I was never going to be 100 of women around the world when I was just serving coke and chicken.”

As the world opens back up and the opportunities for travel become more available, next time something funny happens in the air, listen for the distinctive laugh and then watch for the podcast. The story may just show up on an episode of  Betty in the Sky With a Suitcase.